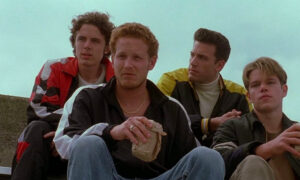 Popcorn and Inspiration: ‘Scent of a Woman’: A Must-See Lesson in Integrity for High School Boys

“Scent of a Woman” is an inspiring high school movie about a boy becoming a man by showing his integrity and character when the chips are down, and a bitter old man becoming a boy again when hope springs eternal and destiny brings him a lovely female companion. This is the story of how the boy and the man become mutual catalysts who facilitate these profound changes in each other’s life.

Much like “Dead Poets Society,” “Scent of a Woman” opens with shots of high school boys in blazers, chinos, and docksiders animatedly migrating between classes at the prestigious all-boys prep school Baird, in New Hampshire.

Charlie Simms (Chris O’Donnell), a 17-year-old Oregonian on scholarship, checks the hallway bulletin board for a Thanksgiving weekend job, hoping to make enough money to be able to fly home for Christmas. Meanwhile, his well-to-do classmates prepare for a swanky Vermont ski adventure at Sugarbush resort.

Harry Havemeyer (Nicholas Sadler), a particularly supercilious “have” (as opposed to Charlie’s “have-not”) invites Charlie along. When Harry’s pal George Willis Jr. (Philip Seymour Hoffman) later says, “You know he’s on aid,” Harry Have replies, “Traditionally during the holidays the lord of the manor offers drippings to the poor.” It’s that kind of milieu.

Charlie finds a weekend assignment. A local family hires him to look after their uncle, a testy, cigar-chewing alcoholic and rageaholic, retired Lt. Col. Frank Slade (Al Pacino) for the next few days.

This is no walk in the park, because not only does the persnickety, demanding, bullying colonel spew nonstop insults—he’s also blind as bat (a fact that his family conveniently neglects to mention).

And the colonel demands a lot from his aides. “Don’t call him sir, don’t ask him too many questions,” his niece explains. Slade also likes his aides to be presentable, with good skin. No pimples!

However, before Thanksgiving break commences, a few of Charlie’s “friends” play a practical and highly embarrassing joke on Headmaster Trask (James Rebhorn). They paint-bomb him and his newly acquired, board-of-trustees-bequeathed dark green Jaguar, all while running snide commentary about the well-attended spectacle over the school’s loudspeaker system.

To Snitch or Not to Snitch

All of which puts Charlie at risk because Trask strongly suspects that Charlie and George Willis Jr. both know who pulled the prank. Trask sweetens the pot for Charlie to rat on his buddies: He dangles a personal recommendation, by him, for Charlie to Harvard University’s admissions board.

So young Charlie Simms’s got the weekend to decide whether or not he really wants to sacrifice a shot at Harvard by stonewalling Trask to protect the paint-perpetrators, whom he knows look down on his peasant status.

The stress of this moral dilemma is further compounded by his new charge Slade, who’s got a grand “when the cat’s away, the colonel will play” scheme, and drags the protesting Charlie via jet plane to New York City, grandiosely exclaiming: “This is just the start of your education, son.”

The colonel’s saved his money to afford the best hotel, the best meals, the best cigars, the best whisky, and a high-end prostitute. Why? It soon becomes apparent that Frank’s nonstop tirades and wise insights cover immense pain and regret about the choices that led from being an aide to LBJ to living in a ramshackle hut behind his niece’s house. And so, after indulging himself in the luxuries listed above, he will give himself a proper military sendoff, dressed in uniform, with his Colt 1911. That’s the plan.

He didn’t count on his normally easily cowed young boy of a handler to suddenly grow a backbone, call his bluff, and demand that he come down, and stand down, from his ledge of misery.

Along the way is a tour de force of Al Pacino theatrics. Pacino, throughout his career, has never not been bombastic, and “Scent of a Woman” is Pacino at his utmost bombastic. It’s a spectacular bombast, featuring the 60-something colonel charming a random, 20-something beauty (Gabrielle Anwar), asking her to tango, and pulling off an utterly believable virtuoso (because the character’s blind) ballroom tango.

And then there’s delightful unfolding of the meaning of the movie’s title: The colonel has, basically, blindness-compensatory supernormal olfactory sensory neurons and an ability to rhino-locate women by the smell of their perfumes and soaps. All the names and labels of which he can quote, much to the ladies’ collective bedazzlement.

Pacino’s creation, Army Lt. Col. Frank Slade, is an idiosyncratic, thespian creation to be savored. He’s got the poetic flair for cursing and insulting that the American military is legendary for, he’s got jokes, he’s got deep insights and literary nuggets, and he’s got the above-mentioned uncanny knowledge of soaps, psychological X-ray vision, and sage advice—all punctuated with Army “Hooah!” battle cries and “Ha!’s”—all of which hit the believability mark every time.

Although O’Donnell matches Pacino’s ironclad Army vet manliness with a just-as-deeply felt, untested boyish faltering and anguish, “Scent of a Woman” was obviously only ever going to be a one-man show; it’s like a Pacino comet.

When a resolution for Charlie’s school conundrum finally arrives, Lt. Col. Frank Slade delivers a scorched-earth monologue that ranks among the best movie monologues ever. It’s highly apropos of today’s moral chaos, and cuts through Baird prep school’s loss of vision as to how to forge powerful, moral individuals. There’s nothing as convincing as a military veteran talking to privileged prep school boys about boys in battle getting arms and legs blown off; about integrity, true manhood, and how, when the bullets fly downrange, some boys run and some stand their ground. And while George Willis Jr. hides safely in his father’s pocket, fatherless Charlie faces danger and shows character.

Every high schooler needs to see it. Sometimes, Hollywood does the right thing and tells the right story.