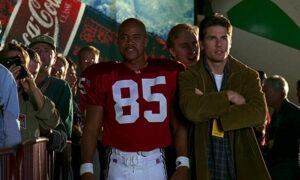 Popcorn and Inspiration: ‘Courage Under Fire’: Standing Guard Over Truth

If a movie shows a military funeral featuring the “missing-man formation”—that fighter-jet fly-by where one out of the four warplanes pulls vertical and disappears into the clouds—I’m a mess. If the movie ends with a scene in Arlington Cemetery, with its rows of white gravestones as far as the eye can see, accompanied by “Braveheart” type strains or militaristic bugles and drums, I’m immediately destroyed. “Courage Under Fire” has both.

“Courage Under Fire” is based on the storytelling template of legendary filmmaker Akira Kurosawa’s “Rashomon” (1950), which contains the artifice of relating an event via participants who have differing memories of it. It’s similar to the parable of the six blind men and the elephant. They all encounter an elephant, but by touch, one blind man determines that it’s a python (he’s got hold of the elephant’s trunk), and another maintains it’s a pillar (he’s got hold of a leg). And so on.

Army Capt. Karen Walden (Meg Ryan) is to be the first woman candidate to get the Medal of Honor, which will be bestowed posthumously for her courage under fire as a medevac pilot during Desert Storm.

Walden first rescued a downed helicopter crew by improvising a spectacular fuel-tank-detonated-by-a-flare-gun bomb that destroyed the enemy, and then managed to lead the soldiers under her command in fighting off the Iraqis, after her own chopper got shot down. She died shortly before they were rescued. But there’s a dark controversy.

Assigned to investigate her medal candidacy is one Lt. Col. Nathaniel Serling (Denzel Washington), who is himself wrapped in a dark, Gulf War controversy. The movie opens with the scene where all hell breaks loose and comes down on his head.

Serling, in the fog of nighttime tank warfare, gave the order to fire that killed several of his own men, including his best friend. That staggering weight, along with the further soul-burden of having been forced to lie about it all to the families of the dead, has left him with a deep depression compounded by a virulent drinking problem and an inability to be around his wife (Regina Taylor), and their children.

Nat now works a desk job under Gen. Hershberg (Michael Moriarty), who handpicked Nat to rubber-stamp Walden’s medal approval. Hershberg’s military brass superiors, Congress, and White House public relations weasel (Bronson Pinchot) are infatuated with the PR potential. Since they’ve got Nat over a barrel due to the coverup of his Gulf War fiasco, they expect him not to make a fuss about any controversy he might uncover during his inquiry into the demise of Capt. Walden, thus greasing the rails to a tidy PR medal-presentation package.

When Serling separately interviews the surviving crew members, he uncovers anecdotal discrepancies regarding the night and following morning during which Walden and crew were pinned down by enemy fire.

The haunted heroin addict and former medic Alario (Matt Damon, in what was arguably the break-out role on his ascension to stardom) is a Karen Walden fan, whereas the openly hostile staff sergeant Monfriez (Lou Diamond Phillips) claims she was a coward—and here we see the main components of the Rashomon dichotomy.

However, while the “Rashomon’s” intention was to illustrate the trickiness of truth, here the technique is utilized for purposes of generating suspense, because when we finally get to the bottom of it all, the facts are incontrovertible. These inconvenient truths naturally don’t sit well with Gen. Hershberg, which puts Nat’s career immediately in jeopardy. “Courage Under Fire” is therefore more a story about truthfulness per se: The corrosive effects of trying to deep-six the truth, and the cathartic effects of having the courage to hew to it, regardless of the perceived outcome.

And so Serling, no longer able to tolerate the cover-up of his own mistake (and also being hounded by fellow-soldier-turned-journalist Tony Gartner (Scott Glenn) to deliver an honorable report), puts his career on the line to prevent another cover-up.

Denzel Washington’s charismatic, deeply grounded, and moving performance anchors the movie. Meg Ryan was trying to transition at the time out of her role as America’s rom-com sweetheart, but was fairly miscast here. It’s clear she’d never done any voice-work before and therefore had no ability to handle the type of yelling that being a commanding officer in the military calls for. If ever there was a role “Aliens” star and Yale Drama School-trained Sigourney Weaver would have knocked completely out of the park—this was it.

That said, one thing Ryan’s performance helps make abundantly clear is what a woman is capable of on a battlefield. I’d often wondered whether women belong in the traditionally male military fighting forces. Women have certainly proven themselves to be as tough and talented as male fighter pilots. “Courage Under Fire” demonstrates that if a woman in command has wounded soldiers that need protecting from enemy forces, and her maternal instinct kicks in—look out. An 800-pound male African lion knows betters than to try and mess with a lioness’s cubs when she’s around. The deadly side of the maternal instinct is that it is absolutely selfless. A woman will endure staggering amounts of pain many men can’t tolerate and fight to the death without a second thought regarding her own safety to protect the lives of those in her care.

As mentioned, Matt Damon (who lost a ton of weight for this role) is riveting. Similar to Scarlett Johansson in “Ghost World,” Julia Roberts in “Mystic Pizza,” Jack Black in “Bob Roberts,” and Natalie Portman in “Beautiful Girls,” it was immediately apparent in ’89 that the unknown Damon was a star on a fast trajectory.

To sum up, “Courage Under Fire,” interestingly, is neither an indictment of the military bureaucracy that often obfuscates truth, nor a flag-wrapped paean to the military in general. It shines, similar to “Spotlight,” the light of truth on the military’s sometimes disingenuous façade regarding “blue-on-blue” mishaps, but it’s clear that military values are held in high esteem. And the missing-man formation for Capt. Walden, and Lt. Col. Nathaniel Serling’s visit to her grave in Arlington, and the honoring of truth all around—belong to the true code of the United States military.