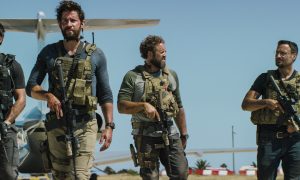 Popcorn and Inspiration: ‘A Few Good Men’: The Marines Who Stand Guard on the Wall

“A Few Good Men” is a court-martial drama based on a true story: At the U.S. naval base at Guantanamo Bay, a Marine named William Alvarado informed on a fellow Marine who apparently fired shots into Cuba.

This ratting-out was responded to with a “Code Red,” which is Marine jargon for the time-honored military disciplinary ritual of hazing. In the traditional military, any situation involving wall-to-wall, natural-leader alpha males—each one of whom is highly confident that he could take over and run the show at any time—there needs to be painful, memorable hazing incidents to knock sense into the men’s heads and ensure they put team and country first. This is very enjoyable for all involved except the “hazee,” of course (until such time when he becomes the “hazer”). This is Man-World. Current wokeism would call it bullying. Let’s not go there.

In the movie (and the play from whence the movie came), the hazee, William Santiago, dies from choking on his own blood, to escalate the dramatic tension. In the real story, they whacked him a bunch of times and shaved his head, but noticed he was turning blue. So they quickly unbound and ungagged him, and tragedy was avoided.

To her horror, insolent, charmy-smarmy, megawatt-smiling, arrogant Navy Lt. j.g. (junior grade) Daniel Kaffee (Tom Cruise) is assigned the case. Just out of law school and far more interested in plea bargaining than in defending anyone, he figures this case won’t be too severe a drain on his softball commitments.

But Lt. Cmdr. Galloway, caring very much about the well-being of all involved, rigs things so as to be allowed to accompany Kaffee (and his assistant, Lt. Sam Weinberg (Kevin Pollak) to Cuba. Ultimately, it’s a crack team. Better-on-paper Galloway’s got the compassionate heart, and rising legal star Kaffee’s got the sheer talent for courtroom fireworks.

Upon arriving at the Marine base, Galloway and Kaffee find out about the issue of Code Red. Word is, the base’s top dog, Col. Nathan Jessep (Jack Nicholson), instead of conveniently transferring “substandard Marine” Santiago elsewhere, decided to whip Santiago into shape. Jessep gave the order to a subordinate, 2nd Lt. Jonathan Kendrick (Kiefer Sutherland at his mean, fanatical best), who in turn ordered the two defendants to carry out the command.

The primary lesson embedded in “A Few Good Men” is that of the directionless, missionless young man (Kaffee) finally growing into his attorney father’s shoes, becoming a man, and discovering that ultimately, his heart resonates with the nobility of honor. But it’s a struggle: Though a plea could get the accused a piddling six months’ jail time, Lance Cpl. Dawson refuses to do anything other than stand up for the fact that he simply followed orders.

At first Kaffee has a fit that this cockamamie, unwavering sense of honor precludes the easy way out, but Galloway soon motivates him to go all out with a full-on, full trial and do justice, justice.

“A Few Good Men” is probably riveting to watch onstage. One could go so far as to say that the movie version boils down to one thing: Its raison d’être is to put Tom Cruise up against Jack Nicholson and let them go at it. It’s the brash, hungry young challenger against a seasoned silverback gorilla. As Col. Jessep relates, he doesn’t get nervous about a lawsuit because he eats breakfast every morning eyeball to eyeball with armed Cubans who’d love to eat him for breakfast. If you want fireworks this Fourth of July, the Cruise-Nicholson courtroom scene is not to be missed. That showdown immediately lit up our American cinematic archive of great lines, with Nicholson’s “You can’t handle the truth!!” still reverberating all these years later.

It’s interesting that director Rob Reiner, who played Archie Bunker’s over-the-top liberal son-in-law “Meathead” in the 1970s popular sitcom “All in the Family,” strikes a balance here. His portrayal of the spit-shined patriots who live by the Marine culture of honor, Bible, and violence is honored by Galloway, who, when asked why she cares so much for these two young, accused Marines, says, compassionately, “They stand on the wall.”  She wants to see justice honored.

Watching all these years later, I have a new appreciation of Nicholson’s blend of humor and menace. His character’s a man who knows how to forge Marines and hold the line against communist Cuba. Yes, it’s wrong that he lied about the death of Santiago. But this is truly the man you want on that wall, or in his own words: “Deep down, in places you don’t like to talk about at parties—you want me on that wall, you need me on that wall.” Yessir we do. And the real-world William Alvarado didn’t die, and there wasn’t a cover up.

Overall, “A Few Good Men” besmirches the U.S. military a bit, and while indirectly accusatory of Bible-thumping Marines like Kendrick, it ultimately makes the connection that those who thump that Bible also tend to be those with the courage and honor to stand guard on the wall separating America’s freedoms from the evils of communism (in this case, Cuban). “A Few Good Men” is suspenseful, powerful, and thought provoking, which landed it both Oscar and Golden Globe Best Picture nominations.