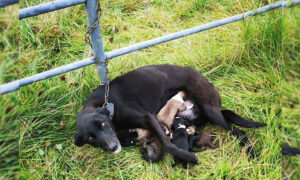 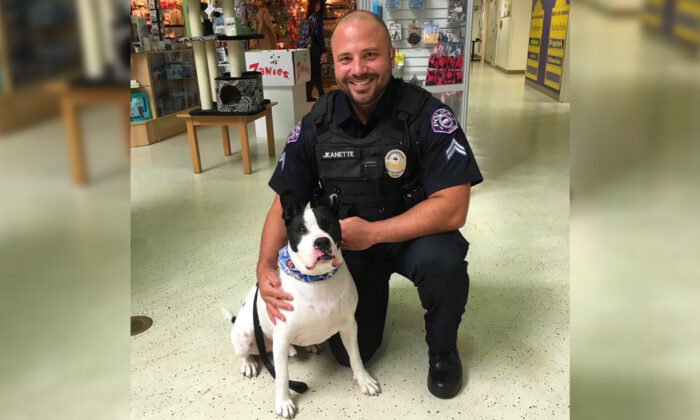 A group of Nebraska police officers befriended a local animal shelter in order to charitably give some of their hard-to-adopt dogs a taste of life outside kennel walls. But for the very first dog on the list, his “K9” experience ended with a triumphant adoption.

Captain Bryan D. Waugh of Nebraska’s La Vista Police Department came up with “K9 for a Day” back in 2017, an interactive adoption drive to help long-term residents of the Nebraska Humane Society increase their chances of finding forever homes.

As per the Omaha World-Herald, participant pups were invited to join their “buddy” officer from the Special Enforcement Bureau on a ride-along—with the honor of riding shotgun while on public patrol. The goal of the program, besides spreading awareness of the importance of adoption, was to help shelter pups become better socialized in the outside world.

The program’s first participant was 6-year-old bull terrier-mix Mickey. He had been at the Nebraska Humane Society for four months and was needing a break from the occasionally stress-inducing, crowded environs of the shelter.

On Oct. 11, 2017, Mickey was collected from the Humane Society by dog lover Officer Nick Jeanette before visiting the police station to collect an official “police patch” for his collar. Mikey and Jeanette took a walk, met and greeted some shoppers, and went for a ride in Jeanette’s police vehicle.

Mickey was a hit with the public. He was even snapped poking his head out of the police cruiser’s window, enjoying the breeze.

Upon arrival back at the Humane Society, a somewhat forlorn-looking Mickey was pictured alone, once again, in his kennel. The shelter posted the photo on Twitter, captioned: “Mickey is back from his police adventure with @lavistapolice and waiting for a new home!”

The La Vista Police Department also shared photos and footage of Mickey’s day out on Facebook, and before long the excitable dog’s antics had caught the attention of a couple named Shannon Andresen and Tyler Nelson from the Irvington area.

For Shannon in particular, it was love at first sight. The couple made plans to visit Mickey one weekend.

The Saturday heralded their first meeting, playing, and bonding. “He was smiling from ear to ear with that tongue hanging out and ready to play,” Shannon told the Omaha World-Herald. By Sunday, Shannon and Tyler were filling out adoption papers.

Officer Waugh later explained where the idea for “K9 for a Day” originally came from. He had been impressed by a similar initiative in Green Bay, Wisconsin, and decided it could also benefit shelter dogs in La Vista.

“Any agency looking for a great community policing opportunity would benefit from the program,” Waugh told The Dodo, “while strengthening the relationship with their partners at local animal shelters or rescues.”

“It was obvious our first dog Mickey had a great day,” the police captain added. According to Fox 42, after huge success with Mickey, La Vista officers agreed to continue the program with other dogs on a regular basis.

“The dogs are selected based on behavior around people, kids, and ability to ride in a car,” the La Vista Police Department explained to The Epoch Times. “This is a win for the dogs, the Humane Society, and the entire police department,” they said, adding that taking honorary K9 pups to the station is “always a big hit.”

As per the Omaha World-Herald, the police department explained that the program has reciprocal benefits; the shelter dogs get to meet potential adopters but also help break the ice between police officers and members of the public.

“We love this partnership,” Pam Wiese, a spokesperson for the Nebraska Humane Society, told The Dodo. “The dogs are more relaxed, and they are able to showcase their personalities as they interact in a more normal, natural way.

“We were thrilled that Mickey’s exposure got him a new home, and the right home too. That is really what our mission is, finding a good home for every pet.”

For the program’s first graduate, Mickey, whose forever family described him as “absolutely perfect,” his ride-along was a journey with a thoroughly happy ending.

“[E]ach dog we have had to this point has been adopted by a loving family who learned about the dog from the program through social media,” the police department told The Epoch Times, adding that “K9 for a Day” has brought attention to both responsible pet ownership and local adoption.

“The most important part of the program,” they implored, “is getting the word out.”