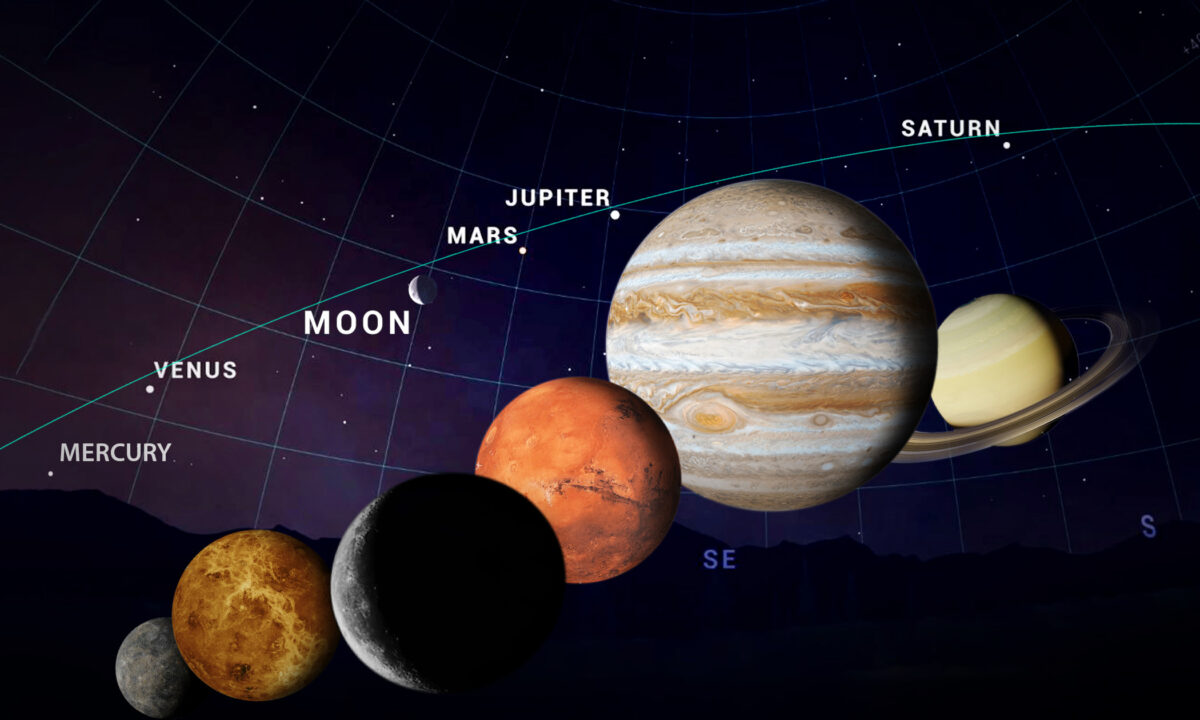 ‘Planet Parade’: 5 Planets and Moon to Form Cosmic Lineup in June–Here’s What You Need to Know

Kicking off June with a cosmic showstopper, a five-planet parade has already begun gracing the morning sky and will continue to greet early risers for the rest of the month.

A rare gathering of several visible planets, which we’ve been enjoying in the predawn heavens for the last few months—including several close conjunctions—has now started spacing out. The result? A lineup of all five “naked-eye planets” of our solar system: Mercury, Venus, Mars, Jupiter, and Saturn, in that order. Coincidentally, that’s their natural order from the sun, making the already-rare spectacle even more extraordinary. The celestial series stretches from low in the eastern horizon to higher in the south.

The distance between Mercury and Saturn was at its closest in the stellar lineup on June 3–4 when the five planets spanned 91 degrees, according to Sky and Telescope, and they’ve been gradually spacing out since then. Low on the horizon, Mercury is hard to spot now—you’ll need an unobstructed view, a good vantage point, binoculars, and you’ll have to wake up before the sun rises and washes the planet out—but it’ll become increasingly accessible as the month wears on and the planetary procession climbs higher in the morning sky.

For the remainder of the month, the planet parade will increasingly spread out, but on the morning of June 23 we’re in for a special treat: the waning crescent moon will jump into the lineup, inserting between Venus and Mars—a stand-in where the Earth should be! At this stage in the show, the distance between Mercury and Saturn will span about 107 degrees. You’ll have about an hour to enjoy the predawn sight, from when Mercury pops above the horizon until it gets lost in the sun’s glare.

Here’s what it could look like 45 minutes before daybreak, according to NASA:

If you haven’t caught the spectacle yet, or weather hasn’t permitted, fear not; there’s the rest of the month to take in the cosmic show. Just set your alarm clock for predawn and find your seats for best viewing early. The parade starts before sunrise.

The last time all five naked-eye planets lined up in sequence over the horizon was in December 2004, according to Sky & Telescope. This year, Mercury and Saturn are even closer together.

June is also prime viewing time to spot one of the best-known globular star clusters: the Hercules Cluster, also called M13. This ancient gathering of stars soars tens of thousands of light-years over the Milky Way’s spiral arms. M13 can be found high in the east in the constellation Hercules in the first few hours of dark. Located in the “keystone,” a pattern of four stars within the constellation’s center, M13 is located about a third of the way between bright stars Vega and Arcturus.

The cluster is best viewed with a telescope but can also be seen with a pair of binoculars. It will appear as a hazy spot. No telescope? No problem. NASA’s Night Sky Network can help you find a public observing event near you.

Globular clusters such as M13, according to NASA, are composed of hundreds of thousands of stars that formed far, far above and below the galaxy’s disk. The stars comprising M13 are unfathomably old, thought to be some 12 billion years old—an age many scientists say rivals that of the universe itself.