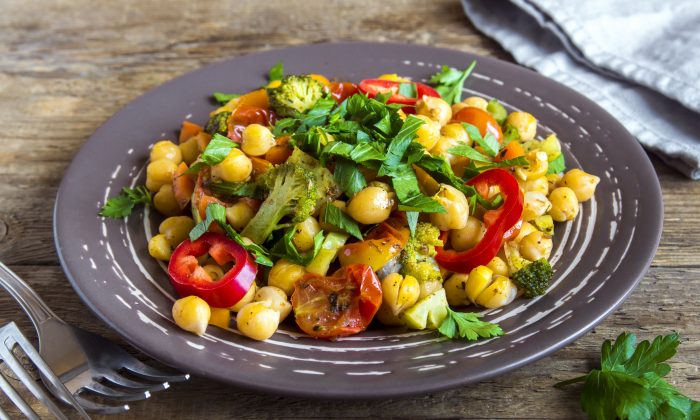 Phytonutrients You Should Be Eating for Everyday Detox

There is a surprisingly simple way to combat the toxins we come into contact with everyday: Eat phytonutrients.

As you likely know, supporting your body’s ability to detox is truly necessary in today’s society. Based on scientific and medical literature, everyone is toxic. Period. Think about it—toxins exist in every aspect of our lives, from the air we breathe, to the food we eat, to even the thoughts we think. It has been estimated that there are more than 80,000 chemicals used in the United States, and we are exposed to many of them on a daily basis.

There is a simple way to support your body’s natural detoxification function—eat more colorful, plant-based foods.

These toxins, ranging from heavy metals to persistent organic pollutants (POPs), can have drastic, negative effects on our health. Animal and human studies have linked toxin exposure to inflammation, oxidative damage, neurodegeneration, immune system dysfunction, and skeletal degeneration, to name just a few.

Unfortunately, avoiding all these dangerous toxins is next to impossible, as they have permeated all aspects of our lives. However, there is a simple way to support your body’s natural detoxification function—eat more colorful, plant-based foods.

You’ve likely heard the refrain to eat more fruits and vegetables from your parents, doctors, and health experts many times, and for good reason. While colorful fruits and vegetables look great arranged on a plate, they also contain powerful compounds at work under the surface that have incredible health and detoxing benefits. These compounds are called phytonutrients, and besides giving foods their colors, they can also support health and detox in every part of your body.

However, you can also tailor your phytonutrient intake to address specific issues or functions. To get you started, here are five classes of phytonutrients that are renowned specifically for their detoxing abilities:

1. Flavonoids. These compounds are found in a spectrum of foods, including cilantro, parsley, onions, apples, oranges, and blueberries. In terms of detoxing power, these antioxidants bind to heavy metals in the body and aid in their removal from the body through urine. They also fight harmful inflammation in the body caused by toxic overload.

To maximize your flavonoid intake, try to eat your fruits and vegetables raw or lightly steamed as much as possible. Overcooking or processing flavonoid-rich foods drastically reduces the bioavailability of the compounds. Just make sure that the vegetables don’t lose any of their rich colors while steaming.

2. Epigallocatechin-3-gallate (EGCG). This phytonutrient has a list of detox benefits almost as long as its name. EGCG triggers increased production of certain genes and enzymes responsible for POP detoxification, helping the body’s natural systems to clear the body of these dangerous toxins more efficiently. The compound is also a powerful antioxidant and boosts anti-inflammatory processes.

The richest source of EGCG is green tea. The amount of EGCG varies greatly depending on the brand of tea, but a high-quality tea like Teavana Green Tea has around 83 milligrams of EGCG per teaspoon.  To get the most out of your green tea, steep it for at least five minutes, to allow for maximum EGCG concentration.

3. Quercetin. This powerful anti-inflammatory compound is found in many sources, including citrus fruits, apples, onions, parsley, nuts, tea, and dark berries like blueberries, blackberries, and bilberries. Similar to the other phytonutrients on this list, it is a powerful antioxidant that binds to heavy metals to facilitate their removal from the body. Like EGCG, it also boosts the enzymes responsible for POP detoxification.

This compound in particular is generally concentrated in the skin of fruits and vegetables. Where possible, try to include as much of plant’s outer layer in your cooking as you can. Only remove the outer, papery skin from onions, don’t peel your organic apples (but do wash them very well), and add some citrus zest (shredded bits of the peel) to dishes.

4. Curcumin. The active compound in turmeric, curcumin, makes it one of the most powerful spices for your health. Curcumin has been called a health superstar, thanks to over 50 healing actions. Looking specifically at detoxing functions, curcumin is an antioxidant that binds to heavy metals in the body, fights inflammation from toxins, and increases the production of enzymes responsible for POP detoxification. It has also been shown to have cancer preventive properties in human studies.

Turmeric can be incorporated into your meals in a myriad of ways. Make a vegetable curry using curry powder and coconut milk, sprinkle turmeric in your salad dressing or on stirfries, or cook it with your eggs in the morning.

5. Organosulfur Compounds. Foods containing organosulfur compounds (or, more simply, sulfur) are generally marked by a pungent aroma and slightly bitter taste. Onion, garlic, broccoli, cabbage, cauliflower, kale, turnips, and bok choy are all rich sources of organosulfur compounds. These antioxidant-rich phytonutrients reduce inflammation, bind to and aid in the excretion of heavy metals, and boost the production of POP-detoxifying enzymes. Like curcumin, they also defend the body against cancer-causing agents. Uniquely, they also protect the liver and reproductive system from toxic invaders.

Incorporating these phytonutrients into your diet is a great way to support and boost your body’s natural detoxification systems and to help you live cleanly in an unclean world. If you’re looking for a way to include the compounds in your next meal, try my phytonutrient-rich recipe for Curry Chicken (omnivore) or Chickpeas (vegan) with Kale and Red Bell Pepper, from my book “Whole Detox.”

Curry Chicken or Chickpeas With Kale and Red Bell Pepper

Melt the coconut oil in a frying pan set over medium-high heat. Add the curry seasoning, pepper, and salt, and stir the spices for a few seconds before adding the garlic and onion. Continue to stir the mixture until the onion becomes soft and translucent. Add the coconut milk, and mix it in well before stirring in either the chicken (omnivore) or chickpeas (vegan). Cover the pan and let the mixture simmer on medium heat for 7 to 10 minutes.

Meanwhile, in a saucepan, steam the kale and the red bell pepper until the kale becomes wilted and bright green. (Don’t let it lose its color!) Remove the vegetables from the heat, and transfer them to a serving plate. Drizzle them with lemon juice, lemon zest, and olive oil. When the chicken or chickpeas are ready, spoon half onto each serving plate and surround with the vegetables. Serve immediately.

Deanna Minich is an author and internationally recognized lifestyle medicine expert with a Ph.D. in medical sciences (human nutrition and metabolism). She is a fellow of the American College of Nutrition, a certified functional medicine practitioner, and a registered yoga teacher. This article was originally published on GreenMedInfo.com