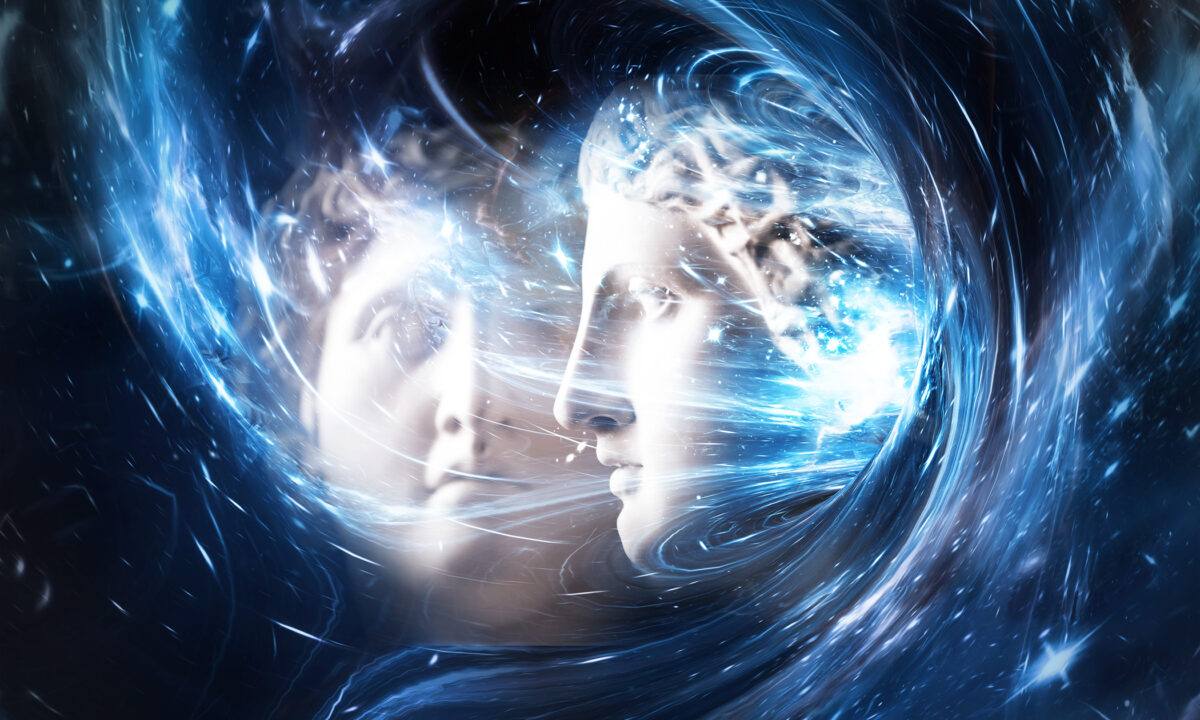 One San Francisco scientist who’s spent decades contemplating the conundrums of physics has turned his attention to the enigma of human consciousness.

But also central to his work is the study of the afterlife following a near-death experience (or NDE) after a motorcycle accident in his younger years.

“I did things using Newtonian physics to create ships,” he said, “but the whole time, I knew better. There’s this whole other world that our five senses don’t register.” He gave a talk on the science of the afterlife at the International Association for Near-Death Studies (IANDS) 2014 Conference in Newport Beach, California.

Exploring scientific theories related to this other world, Hugenot has wondered whether the consciousness of living human beings, as well as the “souls” of the dead, reside in dark matter or dark energy. He has pondered the implications of the power our consciousness seems to have over physical reality.

Hugenot told of a near-death experience in the 1970s during which he experienced part of this other world. He found it “more real than this place.”

These matters aren’t only intellectual curiosities for Hugenot; they bear on a profound experience that has changed his worldview.

Hugenot summarized some theories in physics, interpreting how they may point to the existence of a consciousness independent of the brain and to the existence of an afterlife on another plane. He noted that further investigation would be needed to verify his postulates. He also noted challenges in trying to verify these ideas in a traditional scientific framework.

Consciousness Could Exist in a “Cloud”

Hugenot said the human consciousness may function like the data we store in the cloud. That data can be accessed from multiple devices — your smartphone, your tablet, your desktop computer.

During a NDE, theorized Hugenot, the mind may be fleeing a dangerous situation. We can “flip the switch and go to the other computer,” he said.

Space may not exist, or at least not in the way we commonly understand it, he said, citing Dr. John Bell’s non-locality theorem. “[It’s a] hard one to get; we love our space,” he joked.

Non-locality refers to the ability of two objects to instantaneously know about each other’s states, even if they’re separated by vast distances. It is related to the phenomenon of entanglement: particle A and particle B interact, and thereafter remain mysteriously bonded. When particle A undergoes a change, particle B undergoes the same change; A and B have, in many ways, lost their individuality and behave as a single entity.

Bell’s theorem has been verified by many scientists over the years and is part of mainstream quantum physics. Hugenot’s ideas about the consciousness existing inside and outside of the human body at the same time build on this theorem, but remain outside the mainstream.

Is the Afterlife in Dark Matter, or Maybe in Another Dimension?

What scientists have observed accounts for an estimated 4 percent of our universe. Dark energy and dark matter comprise the other 96 percent. Scientists don’t really know what dark energy and matter are, and their existence is only perceived because of the effects they appear to have on observable matter.

Hugenot said: “This undiscerned 96 percent of the universe … gives us plenty of room for both consciousness and the afterlife to exist in.”

Perhaps the consciousness exists in another dimension, Hugenot said. String theory, much discussed in mainstream physics, holds that other dimensions exist beyond the four-dimensional concept of the universe. String theory views the universe as a world of very thin, vibrating strings. The strings are thought to project from a lower-dimensional cosmos, one that is simpler, flatter, and without gravity.

Why Ghosts Can Go Through Walls — and You Can Too

Hugenot said that reaching another dimension could be a matter of belief. Maybe our bodies could pass through walls if we really believed they could.

“My whole soul believes in 3-D, so I can’t go through the wall,” he said. He looked at some experiments that have shown the power human consciousness has to influence physical reality.

Consciousness seems to have a physical impact on matter. The famed double-slit experiment shocked physicists when it showed that photons (light particles) act differently when they are observed than when no one is watching.

Essentially, the observer can cause the photons to take either the particle or the wave form by the very act of measuring; they aren’t fixed in one form as expected.

Particles exist as potential, Hugenot said, and the observer determines what form they take. He noted that the influence of a researcher’s mind on his or her experiment has serious implications: “If a skeptic wants to replicate what a ‘believer’ found in their experiment, the skeptic can’t do it, because … [it’s going to go] the way that guy wants to see it and not the way the other guy wants to see it.”

Hugenot asked, if potential only takes form when observed, who or what was the observer of the Big Bang? His answer is, simply “consciousness.”

Princeton Engineering Anomalies Research Lab (PEAR) at Princeton University is famous for experiments it conducted showing our minds may actually affect the operations of electronic devices. Over many years, PEAR researchers conducted millions of experiments with hundreds of people. A typical example of such an experiment is as follows:

A random event generator (REG) is an electronic device that can produce bits representing either 0 or 1. Study participants would try to influence the REG either way, toward 0 or toward 1. If the events showed a significant favor in the direction of the person’s will above what chance would dictate, it suggested the person’s will influenced the machine.

The cumulative finding was that the human mind can slightly influence the machine. Though the influence was slight, the consistency was significant. Over the course of so many trials, the statistical power increased. The probability of these results happening by chance rather than by an influence of the human mind is less than 1 in 1 billion.