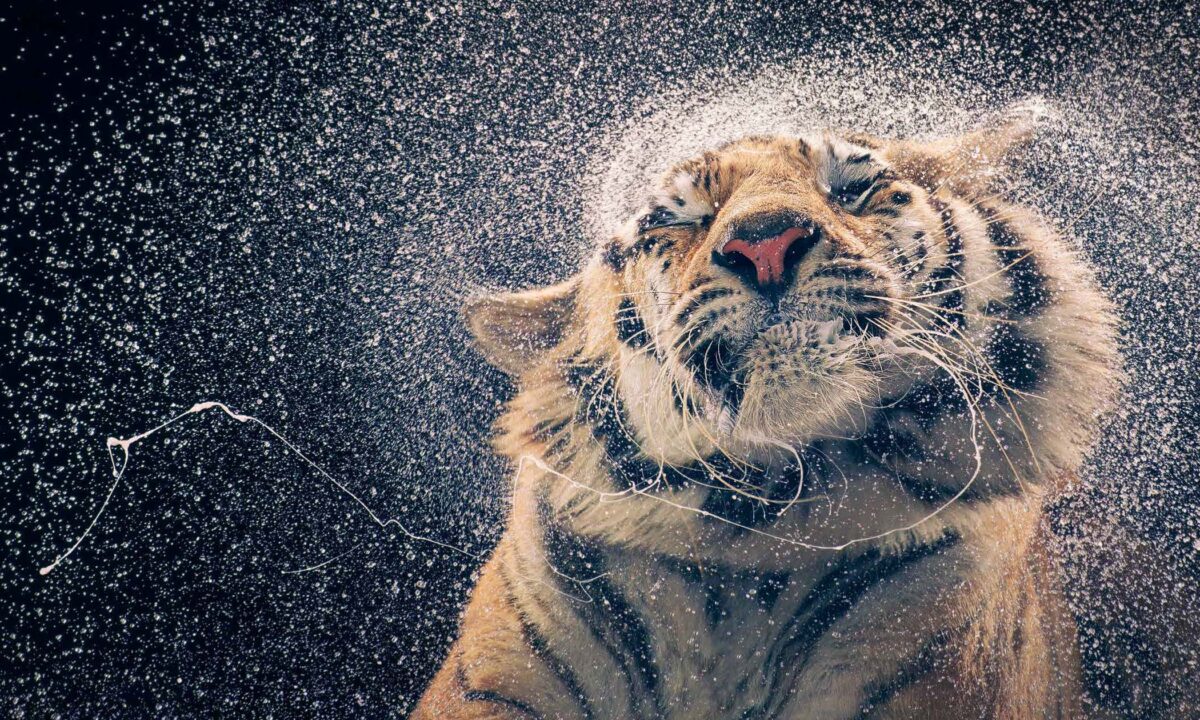 British photographer Tim Flach trains his camera lens on some of the most endangered animals on Earth.

Recollecting boyhood memories sketching outdoors, he attests to a bond he forged with nature by spending time in her midst, literally feeling the energy of a bee streaking through the sky as it passed in front of him while his pencil scratched the page. This primal bond is what he seeks to serve the viewer through his photography by employing a conscious anthropomorphism of nature — attributing human traits to all manner of things that crawl, creep, swim, and flutter in the wild world around us.

Dwindling species — such as the arresting, wide-eyed crowned lemur featured on the cover of his book “Endangered” — are portrayed by Flach in ways we humans can relate to, stirring new sympathy for these beautiful creations, a sympathy needed for their very preservation. A thought-provoking 2001 study by Kalof, Zammit-Lucia, and Kelly, notes Flach, explains that “placing animal representations in a visual context that is usually associated with human representation had the effect of enhancing feelings of kinship.”

The said crowned lemur, curled up, arms wrapped round tucked legs, conspicuously echoes a young human. “That body language evoked a sense of a child holding his knees,” Flach told The Epoch Times, conjuring the scene of a school gathering on the floor of a gymnasium.

While traditional wildlife photography like that in National Geographic creates a sense of “otherness,” Flach seeks to bridge the gap between us and them to instill a sense of “sameness.” Rather than just snapping what “one expects to see” in a wildlife book — “the sort of animals that might be in a children’s bedroom, the flamingo, the toucan,” Flach says — there’s room for the unexpected, which divulges their all-important surrounding story.

“The richness of images is that they can have this slippage between different possibilities … There was a picture of a tiger shaking its water. You remember that?” he said, denoting a rather astonishing close-up of a soaking-wet Bengal tiger shaking water off its fur — reminiscent “of your golden retriever,” alive with undulating jowls and whiskers, swirling and spraying H2O and saliva in all directions.

He shows a Peruvian Inca tern avian with an almost absurdly ridiculous “handlebar mustache,” furthering the anthropomorphism by tapping into our cultural consciousness of facial hair without diminishing the bird’s beauty. Photographing polar bears can get “quite a cliché,” he added. But with their eyes closed as if contemplating? underwater? That might echo how we see ourselves pondering a problem. In a bathtub perhaps.

He reveals a portrait of a freakily outlandish-looking creature called a saiga, photographed near the Caspian Sea in Russia, which have been poached for their horns, a prized alternative to ivory. A kind of antelope, this strange and wonderful beast features light fur, ribbed horns, and alien-like trunk-nose. “They have this — we call it proboscis — nose, which does feed in very dusty environments,” said Flach. “But they were hunted to last degree.” It’s reminiscent of something out of the “Star Wars” cantina, as we humans readily know from today’s pop culture world.

Sadly, the saiga faces impacts from human interactions. “They’re so scared of people because they’re chased on these motorbikes, and they literally run them down,” Flach said. “They have heart attacks, and then they plug them, and so when they hit any human activity, they’re really, really nervous.”

The photographer has journeyed to Kenya to look the very last male white rhinoceros in the eye; to the Galapagos Islands to watch hammerhead sharks gracefully circle above him; and to Mexico to gaze upward upon thousands of monarch butterflies floating like golden confetti.

Though Flach plans excursions with a specific animal in mind, an element of chance always enters the equation; it’s part of the creative process, he says. Visiting Sichuan province, China, to photograph pandas outside Chengdu also afforded him the chance to snap golden monkeys and red pandas. His foreknowledge going in is not always what comes out. “I know I need a double-page spread,” he said. “But what I need to do is see what reveals itself, so I go searching.”

He added, “The creative process is: you have to go to catch something, you have to ‘go fishing.’ When you’re there, you have to be present, you have to observe — truly look and see what reveals itself. When something reveals itself, that surprises you, in turn, that will surprise other people. If you just do what you could predict, often that’s less interesting.”

Alluding to challenges we humans currently face in finding harmony with mother nature, he invokes a peculiar term: “the Anthropocene epoch,” meaning the age where man is shaping the planet geographically rather than the fluxes of natural forces doing so. Conversely, “the Holocene” is what led up to that, until about the time of the Industrial Revolution.

For his book, Flach collaborated with leading conservationist Jonathan Bailey, who helped illuminate the stories behind the pictures with his writing, and with the IUCN Red List of Threatened Species, which provided valuable resources to illustrate in great detail how animal species are undergoing dangerous and fatal declines.

Helping humans connect emotionally with creatures of the Earth, great and small, the photographer hopes to touch the hearts and minds of those who decide policy around the globe.