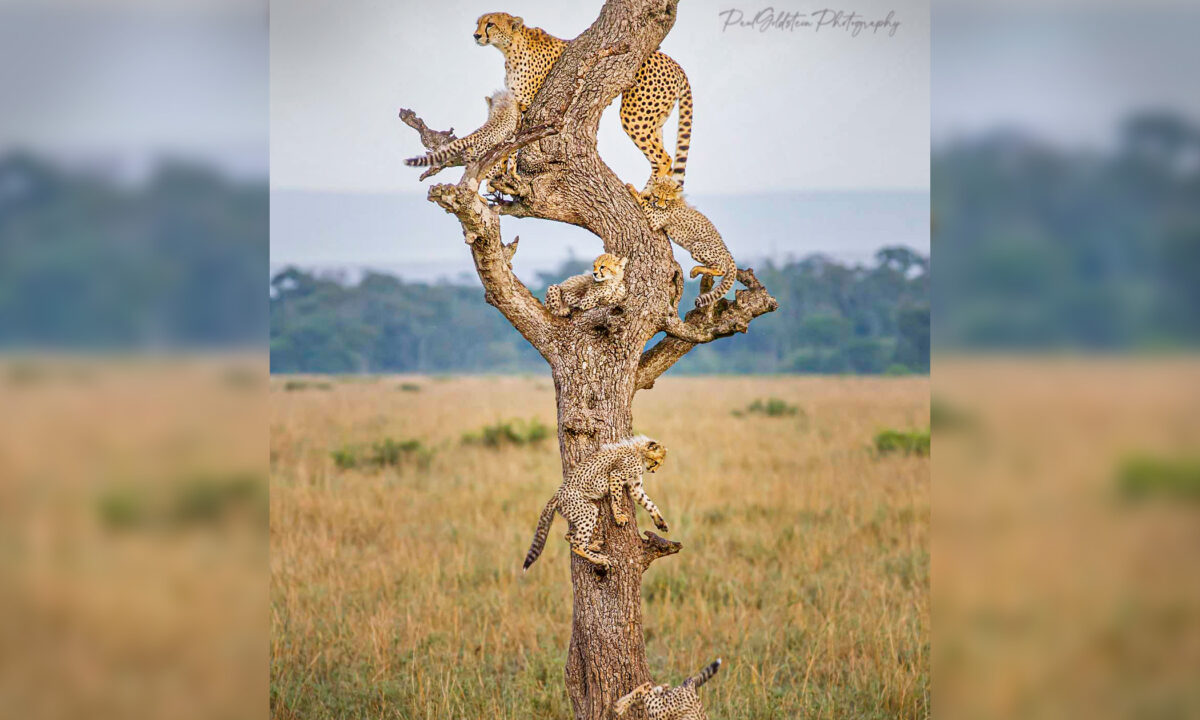 He spent nearly 30 years honing his craft and knows what must align to produce something truly original. He’s photographed jaguars in the Pantanal, tigers in India, a mother polar bear nursing, myriad animals in Africa, and aurora borealis dancing above 10,000-year-old grounded icebergs.

And that’s just the tip of the iceberg.

Once working for a Kenyan safari outfit in need of pamphlets and imagery, Goldstein took up his camera — something he loved anyway (great gig!) — and found what it takes to capture that nanosecond moment he calls “originality.”

“Originality, that’s absolutely what I’m after,” he told The Epoch Times. “I once took a photograph of a leopard on an open branch in a storm with the last minutes of sunshine painting it … you need an awful lot of ducklings in a row for something like that to happen. As I pressed the shutter, I knew I’d never see that photo again, because there’s just too much that has to go right.”

He articulated the rudiments behind seeking and finding, as he sees it — not blazing away filling up megapixels, but living the moment, getting it right. It’s time well spent to arrive, pause, and “check in” — to turn the shutter on silent mode, respect, and not intrude. It takes patience, fortitude, even pain.

“There’s nothing easy about it,” he said, alluding to his still-frozen toes after a visiting Nunavut, in the Canadian Arctic. “It’s never, ever about accumulation. … I would prefer one polar bear on ice rather than fifty on land.”

On one afternoon, he recalled, they crossed within “50 or 70 meters” of a mother polar bear — relaxed, lactating, feeding her cubs. The light contrast was great, the shot not difficult with a tripod but “enormously rewarding.” That night, aurora borealis put on a “huge light show.”

“It was just remarkable,” Goldstein recalled.

He spoke of capturing the rarest moment of a cheetah coalition all in the same “family tree” in the Mara National Reserve in Kenya: “That was four days with a family of cheetahs, and they all came together for a nanosecond.”

He mentioned three flamingos flying in perfect formation, and what that took. “That was all about a lot of rain, being up about eight times a night hoping it would clear, then 1,600 meters of chilly altitude going to work to the nest,” he said. “And then gambling that the hyenas would come down to pick off a few about a kilometer away and put them all in the air.”

Anyone can make flamingos alight by charging or driving into them. “No! That’s not interesting,” Goldstein exclaimed.

The self-taught photographer from London first learned from coffee-table books. His peculiar ambition, self-criticism, and outlook on wildlife shaped his work’s quality, garnering worldwide recognition. He further explicated his ends.

“If you take a photograph of the same subject as I take, and we blow them both up on a 10 x 8, I just want somebody to look at mine a bit longer, doesn’t even mean it’s necessarily better,” he told the newspaper. “It just arrests the eye more. I’m after impact. Critically, a good photograph should be 80 percent about fieldcraft, patience, sensitivity, no fear of failure, ambition, and of course being there.”

He added, “I’ve always been very self-critical on just about everything, whether I’m lecturing, presenting, photographing, running, fundraising.” That ambition would carry him far — literally — traversing the Khumbu glacier in Nepal, whale watching in Alaska, penguin sighting in the Weddell Sea in Antarctica, and beyond.

That ambitiousness sometimes rubbed his students the wrong way on his guided tours — “the tough love approach,” he called it. “And it does offend,” he added. “And grown men have cried. And some people it’s too much for them. Well, I’m sorry, I’m not changing.”

Goldstein’s passion extends to conservation of wildlife. He’s raised half a million running marathons for Bengal tigers — which face extinction due to poaching — and made a point of sharing with us what it meant to photograph one of the last remaining black rhinos — which have seen a 96 percent reduction in numbers due to illegal hunting for their horns.

Photographers who intersect with wildlife shoulder a responsibility that exceeds furnishing one’s Instagram.

“It’s only a photograph,” Goldstein says. “A photograph at any cost is, particularly with wildlife … is ethically questionable, morally bankrupt. That’s why when I see a photograph of a tiger or a leopard snarling down the barrel, it just tells me one thing: that the photographer’s misbehaving or it’s too close.”