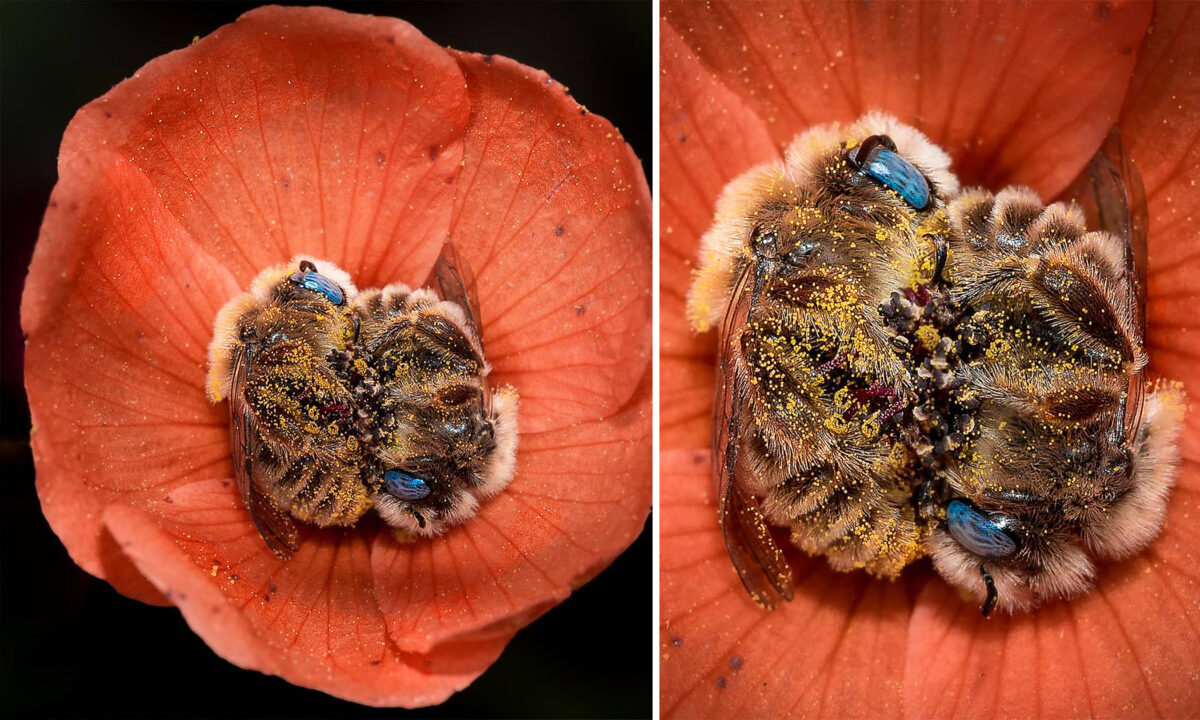 The bright, orange globe mallow flower, which flourishes in the desert, has been likened to a refreshing grenadine summer drink.

That vivid flower blossom has a friend in the blue-eyed globe mallow flower bee (Diadasia diminuta). It loves gorging on pollen by day and, strangely, curling up inside those same blossoms—in a nectar-induced stupor, covered from head to toe in yellow pollen—by night.

Earlier this year, Phoenix-based photographer Joe Neely set out with his wife, Niccole, to snap some Mexican poppy wildflowers, but found the fields empty. What they saw instead—which blew their minds—was none other than a group of sleeping globe mallow flower bees, eyes sparkling like blue sapphires, within the bright orange blossoms in the desert twilight.

“Niccole was looking for the perfect flower and noticed some bees inside one of the orange globe mallow blooms,” Neely told The Epoch Times. “I hurried over and observed them for several minutes, even after sunset. We joked that they looked pollen drunk as they stumbled about climbing up the twigs instead of flying.”

As the bees settled in for the night, the pair noticed how each flower housed one occupying bee; while one lone bee was left seeking an empty spot to tuck into.

“They were going to sleep, I’ve never seen this behavior before,” Neely said. “Then as sunset grew darker one last bee was trying hard to find his own flower but they were all taken so he crawled into petals with this other bee who shifted a little to give him room.”

Neely had his micro-photography equipment handy, and it was the perfect opportunity to snap the bizarre sight of the sleeping insects—including the two bunked up together.

“I thought ‘wow this is the most perfect composition I’ve ever seen,’ so I got my macro equipment out and took a few snaps,” he said. “Their blue eyes and the orange flowers contrasted beautifully. It wasn’t until we got home that learned more about them and their unique behavior of sleeping in globe mallow blooms.”

Neely later learned that male globe mallow flower bees sleep inside the blooms (sometimes with a buddy); meanwhile, females burrow underground where they tend to their offspring—those baby bees feed on pollen that is brought back to the nest and made into pollen “loafs.”

The males get absolutely covered in pollen during their foraging exploits. The yellow powder is caught in their leg and body hairs and is mostly groomed into the “pollen basket” on their hind legs to be carried home. The rest is deposited in the blooms the bees visit, aiding flower reproduction—friends helping friends.

Joe Neely, who loves photographing “anything in the natural world,” shares his work on his Instagram page and on his website.