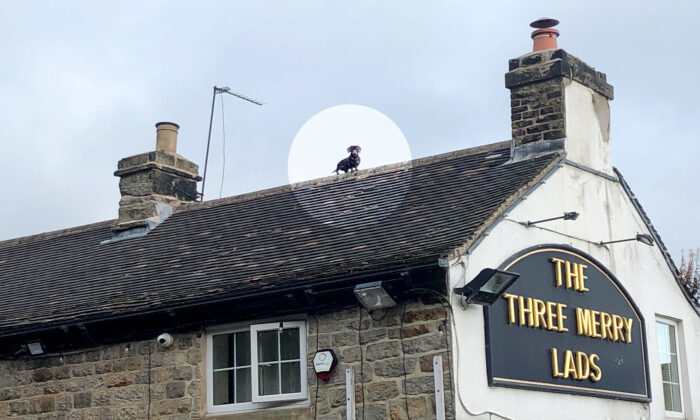 A little dachshund who thinks he’s a superhero claimed internet fame after being spotted on the roof of a pub on the outskirts of Sheffield, UK.

The extraordinary dog was captured on camera when one local was walking, and heard barking. The walker looked around, but saw no dog—until they looked up, and was shocked.

The stubby-legged brown dog stood high above, on the peak of the pub roof.

A photo was snapped. It found its way onto Reddit, and internet fame followed.

“On the morning countryside dog walk when I hear barking, couldn’t figure out where it was coming from until I look up,” the caption by u/Rocketmandan123 read.

The family who own Three Merry Lads pub—and who live above the establishment—were blown away by all the attention their dog, 1-year-old pup Chester, received.

“He has done it before, we live above the pub and he has access from the roof terrace, up several smaller tiered roofs to where the image was taken.”

After the daredevil pooch started a buzz on the social media site, the pub owners joined the conversation.

“He’s fine…thinks he is Spiderman. We live in the flat above pub and he likes to escape and have a look around,” they wrote.

“To be fair to him we do have some amazing views so get why he enjoys it!!”

Redditors found loads of amusement in the spectacle of the short dog towering overhead.

“That dachshund is finally as tall as he feels,” user Elgato13 wrote.

One resourceful internet user shared, “Looking at satellite imagery on Google Maps, there seems to be a large complex of extensions hidden behind the Georgian front, all with different heights.

“So there’s probably a window it can just plod out of.”

But for some, the Spiderman narrative stuck.

“I think it climbed up the side of the building, for sure,” Redditor BoogelyWoogely wrote.