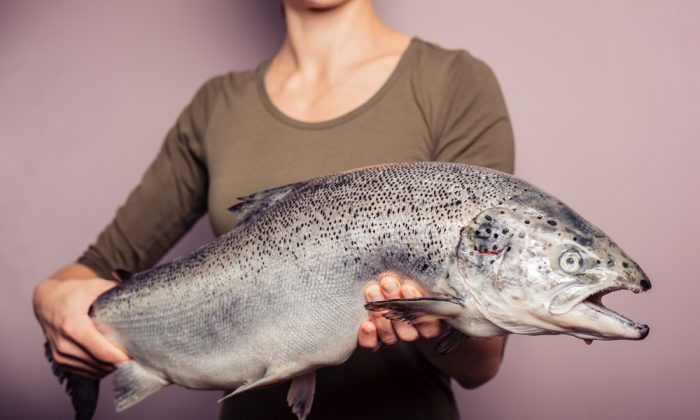 How do regulators determine if genetically altered salmon is safe to eat? (Shutterstock.com)
Good to Know

After waiting 20 years for approval, the world’s first bioengineered animal developed for human consumption may soon become your next dinner.

The animal in question is a fish developed by Maryland based AquaBounty Technologies. Their innovative product is an Atlantic salmon endowed with genes from an eel and a Chinook salmon. This genetic design produces a bigger, faster-growing fish, and, if everything goes according to plan, a better profit.

According to the U.S. Food and Drug Administration (FDA), AquaBounty salmon has sufficiently met safety requirements. Regulators evaluated this genetic invention as a veterinary drug. According to FDA, genetic alterations of animals meet the drug definition under the Federal Food, Drug, and Cosmetic Act, because it is “an article intended to alter the structure or function of the body of man or animal.”

According to Washington DC-based food safety non-profit Food and Water Watch (FWW) this evaluation strategy makes sense for drug applications—like the goat that was engineered to produce a human pharmaceutical in its milk—but not for an edible one. When it comes to approving a gene altered fish meant to be food, FWW argues that the drug evaluation track is the wrong tool for the job.

On April 2, FWW sent two petitions to the FDA urging regulators to reconsider the genetic manipulation of salmon as a food additive. According to FWW assistant director Patti Lovera, not only does the food additive evaluation offer more transparency and require more safety testing, it matches closer to the fish’s intended function.

“A drug is a different approval process. It judges whether it’s effective in doing what it says it’s going to do,” said Lovera. “We think it should be a different process for something that we’re going to eat.”

In a statement regarding the approval process of genetically altered animals, FDA says that they also consider food safety when evaluating applicants developed specifically for food. Regulators say the Aquabounty fish received a “rigorous analysis of food safety and application of a stringent safety standard.”

But Lovera says that such an evaluation is much weaker than if the salmon was specifically scrutinized as a food additive.

She points to a 2010 review from the FDA’s Center for Veterinary Medicine, where a panel of outside experts were asked to examine the safety studies provided by AquaBounty. Some panel members were reportedly very critical of the data from which they were to base their evaluation. For example, one comparison of conventional farm raised salmon and the genetically altered version was limited to six fish.

“We’re not saying it definitively shows that it’s unsafe,” Lovera said. “We’re saying that there’s more to look at. You need to do a better job with better quality data, and that is more likely to happen in the food additive process. They need to take a closer look, with more data, more statistical power, more rigor in the analysis that they’re doing.”

FWW sent a similar petition in 2012, but after so much time already spent on the drug track, regulators showed no interest adopting the food additive strategy. Lovera hopes this new petition, which identifies more shortcomings with the drug evaluation strategy, will convince regulators to reconsider.

“We would like to think that they are taking a second look at the concerns that we’re raising, and lots of other groups have raised, and it’s starting to sink in. But we don’t know. It’s not a very transparent process. We don’t know what’s going on inside the agency.”

AquaBounty has already endured a long road getting its invention to market. The company first submitted its application in 1995. By 2011, FDA was ready give the green light, but final approval has so far been elusive.

The longer the process drags on, the less of a chance the fast growing salmon can make a splash in the marketplace. The public has grown suspicious, lawmakers want to restrict it, several major grocery chains have pledged that they will not carry the product, and some conventional salmon breeders claim they can already get comparable growth rates without genetic manipulation.

But Lovera says that AquaBounty’s salmon is important to the biotech industry because it’s the first. Even if this fish is a flop, its approval will set a precedent for the other genetically altered animals waiting in line.

“There is some pressure from the larger biotechnology world to get one of these things approved,” she said. “At some point it’s going to be less about the salmon and more about some genetically engineered food animal getting through the approval process.”