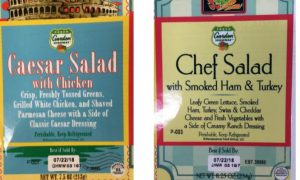 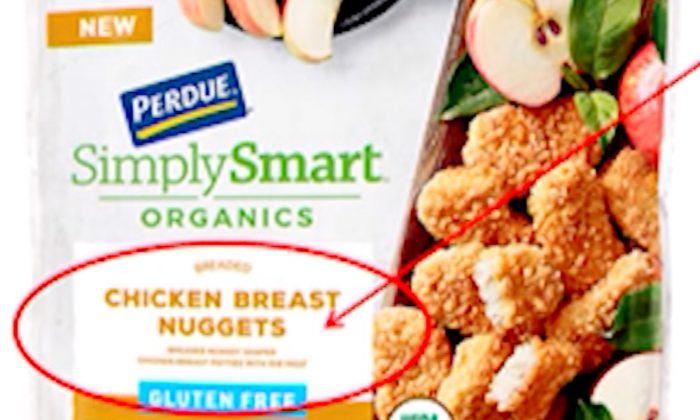 WASHINGTON—Perdue is recalling more than 68,000 pounds of chicken nuggets because they may be contaminated with wood.

The gluten free Organics Breaded Chicken Breast Nuggets were produced on Oct. 25 and were sold at stores nationwide. They have a UPC bar code of 72745-80656 and the establishment number of P-33944 in the US Agriculture Department inspection mark.

The USDA says Perdue received three complaints that wood was found in the nuggets.

The USDA says there have been no confirmed reports of adverse reactions. However, the product should be thrown away or returned to the place of purchase.

Perdue says it is recalling the product out of an abundance of caution.

More Than 11,000 Pounds of Chicken and Pork Sausage Recalled Over Metal Pieces

More than 11,000 pounds of ready-to-eat chicken and pork sausage was recalled due to possibly being contaminated with pieces of metal.

The recall from R. J. Zeigler Co., an Alabama-based company, was made due to the finding that the products “may be contaminated with extraneous materials, specifically metal,” the United States Department of Agriculture stated in an alert.

The products have the establishment number “EST. P-9156S” inside the USDA mark of inspection.

The products were shipped nationwide.

Consumer complaints received about the products on Dec. 13 and Dec. 27, triggered an investigation which concluded on Dec. 29, and prompted the company to alert the department’s Food Safety and Inspection Service (FSIS).

“FSIS is concerned that some product may be in consumers’ refrigerators or frozen and in consumers’ freezers. Consumers who have purchased these products are urged not to consume them. These products should be thrown away or returned to the place of purchase,” the service stated.

Kroger Issues Recall for Some Shrimp

Kroger issued a recall for shrimp products sold in three states, saying the products could be contaminated.

“The product may be under-cooked, which could result in contamination by spoilage organisms or pathogens,” the company said in the recall (pdf).

“Please return the product to this store for a full refund.”

People who bought the products should not consume them and should return them to the store at which they purchased the shrimp, Kroger said.

The recall is only for shrimp products sold in central and northwest Ohio, Michigan, and northwest Virginia, a Kroger spokesperson told CBS. The recall included Fry’s, King Soopers, and Smith’s, which are all grocery stores owned by Kroger.

The recalled products are as follows:

Consumers can contact the Aqua Star Consumer Hotline at 1-800-232-6280 with any questions.

“We are sorry for this inconvenience. Your safety is important to us,” the company stated.