People Who Get Johnson & Johnson Vaccine at Elevated Risk of Guillain-Barré Syndrome: Study 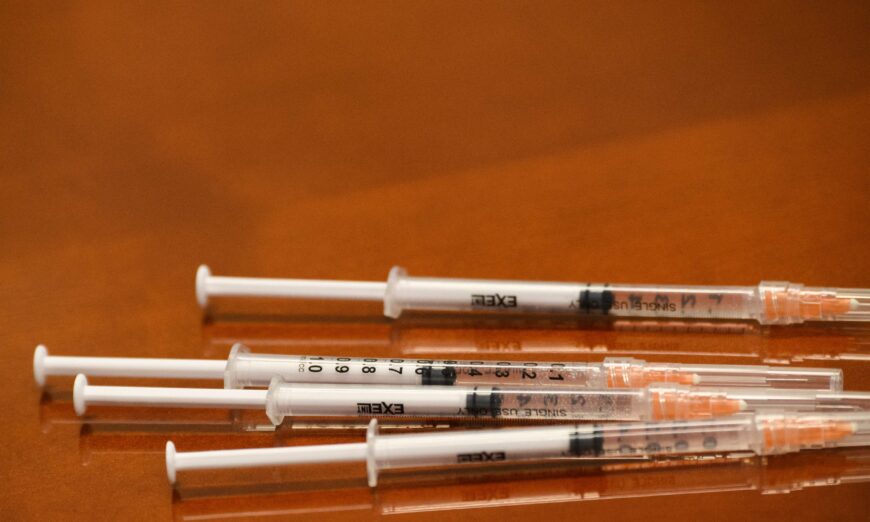 Syringes with doses of the Johnson & Johnson COVID-19 vaccine are seen in California in a file photograph. (Patrick T. Fallon/AFP via Getty Images)

People who receive the Johnson & Johnson COVID-19 vaccine are at elevated risk of getting a severe autoimmune disorder that can cause paralysis, according to a new study.

Researchers used data from the Vaccine Safety Datalink, which is run by the Centers for Disease Control and Prevention (CDC). They found (pdf) 21 potential cases, 11 of which were confirmed, of Guillain-Barré syndrome (GBS) in people who got the shot. Most happened with 13 days of vaccination.

Adjusted rates also came in higher than the expected and background rates.

Researchers determined the incidence of GBS was much lower among those who got a messenger-RNA-based vaccine, or a Moderna or Pfizer shot. The rates after those vaccines were similar to background rates.

The study validates findings from the Vaccine Adverse Event Reporting System (VAERS), a passive reporting system run by the CDC and the Food and Drug Administration, the researchers said.

A study published in the Journal of the American Medical Association in October, analyzing data from the system, found a “potential small but statistically significant safety concern for Guillain-Barré syndrome following receipt” of the Johnson & Johnson vaccine.

The number of GBS cases reported to VAERS following receipt of the vaccine through Dec. 8 was 210.

Kayla Hanson of the Marshfield Clinic Research Institute in Wisconsin completed the new study with help from Kaiser Permanente Research scientists, the Ambulatory Care Services in Denver, and HealthPartners Institute in Minneapolis.

The study was sponsored by the CDC. It was published as a preprint, or before peer review, on the Medrxiv server.

Limitations included substantially fewer doses of the Johnson & Johnson shot being administered in the United States relative to Pfizer and Moderna jabs, and the exclusion of booster doses.

Johnson & Johnson did not respond to requests for comment.

The company said in a press release this week that GBS “has occurred in some people who have received” the company’s vaccine. In most people, the symptoms start appearing with 42 days, it said, adding that “the chance of having this occur is very low.”

Johnson & Johnson urged people to seek immediate medical attention if any of the following symptoms develop after getting the vaccine: Weakness or tingling sensations, especially in the legs or arms, that’s worsening and spreading to other parts of the body; difficulty walking; difficulty with facial movements, including speaking, chewing, or swallowing; double vision or inability to move eyes; difficulty with bladder control or bowel function.

The Food and Drug Administration in July added a label to Johnson & Johnson’s vaccine warning people about its link to an “observed increased risk” of GBS.

However, regulators say the benefits of the vaccine outweigh the risks associated with it.