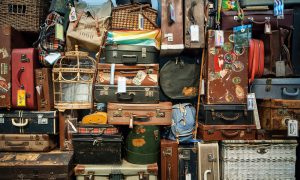 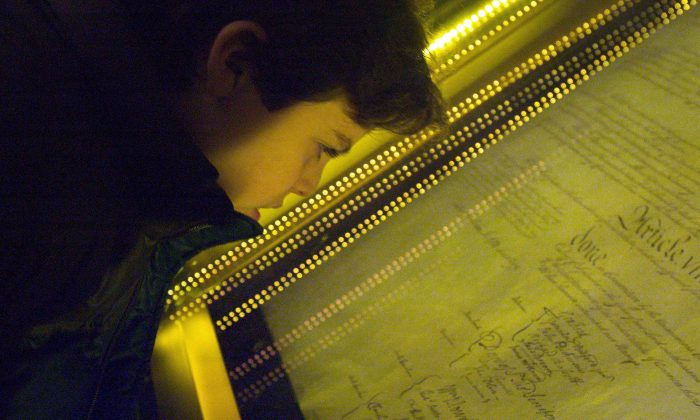 An 8th grade student views the original Constitution at the National Archives in Washington in this file photo. (Brendan Smialowski/Getty Images)
Life & Tradition

Pearls Are Made From Grains of Sand: The Next Generation

At the Washington Examiner, Julio Rosas examines a recent survey in his article, “Importance of Patriotism, God, and Family Plummets Among Young People: Poll.” Rosas opens his article with this brief summary:

The one category in the poll where young people outpaced their elders? The importance of self-fulfillment.

If we are among those who believe in the worth of patriotism, faith, and family, our first inclination on viewing these results might be to shake our heads in dismay and wonder what is wrong with Millenials (those born between 1982 and 1995) and Generation Z (1995 and 2015). Love of country, love of God, love of family, the desire for children: are these not the basic building blocks of civilization? How can so many young people consider them unimportant? What’s wrong with them?

The answer to that last question is simple.

From the time these youngsters were out of diapers, they have inhabited a culture that all too often denigrates American ideals and institutions, religious faith, and the home.

Since the 1960s, the media, many of our educators, and various commentators have demonized American history and American ideals. From these critics and assailants, our country has suffered death by a thousand cuts, so much so that from certain quarters, all we now hear is a barrage of hatred and opprobrium directed at our country.

For just as long, religious believers have suffered similar assaults, mocked for their acknowledgment of a higher power and ridiculed for the traditional beliefs of their faith, particularly those regarding sexuality and abortion. Though we give lip service to a deity—“In God We Trust” remains our national motto—activists, judges, and politicians long ago drove religion and prayer from the classroom and the public square.

The evidence that our culture is no friend of families is abundant. Here’s just one example: Compare the view of family life on television and in the movies from just 40 years ago to the present. Remember shows like “Little House on the Prairie” or “The Wonder Years?” Remember “Christmas Story” or “Father of the Bride?” Now try to think of a television show or a movie from the past decade that offers a positive portrayal of an intact family: a father, a mother, children.

As for the pursuit of self-fulfillment, we indoctrinated these young people with the line, “I Am Special.” We taught our children that the world revolved around them. In too many cases, we neglected to teach them sacrifice, to put others ahead of themselves, to seek to accomplish the good or the great rather than satisfying their own desires.

What did we expect our young people would believe?

And unless we reverse course, a greater catastrophe looms in the not too distant future.

The Millennials and Generation Z will be the parents—at least some of them will—the teachers, and the mentors of the next generation. Will they pass on their diminished views of patriotism? Will they lead their children away from religious faith as so many of them were led away? Will they grow healthy families?

I won’t be alive to see what transpires, but I have a stake in that future: my children and grandchildren. Eight of my grandchildren were born after 2015, and of the others, the oldest is only 14. My own four children are all Millennials, and in no way fit the description of decline described in this survey. They and their spouses all practice a religious faith, love their country, and believe in the value of family and children. Self-fulfillment matters to them, but that concept loses its edge when you’ve just changed your 10,000th diaper.

If you’re a Baby Boomer, a member of Generation X (1965–1980), or a Millennial, and if you value your country, practice your religion, and still think of the family as the foundation of culture, there are steps you—and I—can take to keep those values alive.

First, we can raise our kids to be tough. We can bestow on them some of the virtues once a part of the American fabric. A belief in truth, a willingness to serve, a love of liberty and its handmaiden responsibility, frugality, hard work, the desire to solve problems rather than looking to government for those solutions: we can instill these traditional values in the next generation.

Next, we can educate our children. We can see that they receive not only the education of the classroom, a noble and necessary endeavor, but also that they know the meaning of the Declaration of Independence and why it is one of the world’s great documents, that they understand in spite of all its flaws, the United States remains a city on a hill, that countless men and women have given of themselves, even their lives, to honor and protect the principles of liberty.

If we practice a faith, we can deposit that faith in our children, making certain they understand both the letter and the spirit of its laws. Whatever our circumstances—married, divorced, single parent—we can model the meaning of family life.

Finally, when the culture pushes on us, we have the duty to push back. When the government orders us to act against our conscience, when society bids us to accept some new politically correct policy, we can buck up against these dictates. We can do so by living our lives in contradiction to those policies, by condemning them privately, and if we are able and willing to take the heat, publicly.

Movie actor Charlton Heston, who marched with Martin Luther King Jr. and later became a voice for conservatism, made these remarks in 1999 in a speech at Harvard University:

“But when told how to think or what to say or how to behave, we don’t. We disobey social protocol that stifles and stigmatizes personal freedom. I learned the awesome power of disobedience from Dr. King who learned it from Gandhi, and Thoreau, and Jesus, and every other great man who led those in the right against those with the might. Disobedience is in our DNA. We feel innate kinship with that disobedient spirit that tossed tea in the Boston Harbor, that sent Thoreau to jail, that refused to sit in the back of the bus, that protested the war in Vietnam. In that same spirit, I am asking you to disavow cultural correctness with massive disobedience of rogue authority, social directives, and onerous laws that weaken personal freedom.”

These efforts may seem small or ineffectual, until we remember that a grain of sand slipped beneath the shell of an oyster produces a pearl.

We can be that grain of sand. We can help create those pearls.