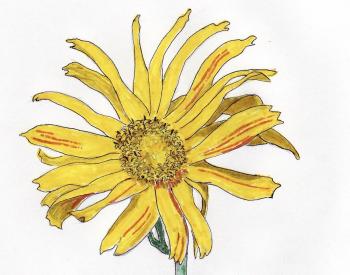 If you have exercised too much and are feeling the pain, are there healthier ways of treating this problem than reaching for ibuprofen?

Homeopathy is associated with very few side effects and can treat the effects of overexertion, but some individualization is needed.

Unlike taking an NSAID, you need to observe yourself a bit. For example, do you feel as if you have been beaten, and it is uncomfortable to lie down in any position, or do you feel so stiff that when you try to move it is really painful? Did symptoms appear after you got chilled following exercise?

The most commonly indicated homeopathic remedy for trauma is Arnica montana (leopard’s bane). Immediately after we undergo trauma, we feel no pain. It is as if we are in a state of shock. Even if we have had an accident and suffered from tissue damage, we feel no pain.

If someone approaches to ask how we are feeling, we step back, not allowing physical contact, and say something like, “I’m fine. There is nothing wrong.”

Perhaps this response is programmed into us, so we can find safety as soon as possible, before the onset of pain.

Shortly after overexertion or an accident, pain will appear. When we try to sit or lie down, it is difficult to find a comfortable position since we hurt all over.

If the above symptoms are present, then a dose of Arnica should help us recover quickly.

One interesting aspect of Arnica is that it can treat the effects of trauma even if the trauma was not experienced recently.

A family friend was visiting us and complaining that following a car accident a few weeks ago, she no longer wanted to drive her car. Once she got behind the wheel, she became hypervigilant, always feeling that the cars around her might run into her. After one dose of Arnica, the symptom was gone that same day.

Another homeopathic remedy for overexertion is Rhus toxicodendron (poison oak). Following strenuous exertion, you may feel quite stiff. The stiffness is worse on initial movement and better by continued movement—the so-called rusty-hinge state.

In these cases, a dose of Rhus tox should make the stiffness disappear.

While watching a football game, you may notice that when a player goes off the field to the benches, he puts a coat on.

Of course, he is already hot, so why the coat? The coat is to avoid suppressing sweating, which can cause problems.

For more than 200 years, homeopathic physicians have observed that when sweating is suppressed, illness follows. Suppression of sweating can be the result of exercising heavily and then wearing light clothes, going swimming and then becoming chilled after getting out of the pool, or any situation that exposes us to a cold wind that suppresses perspiration.

One person always had a fever following running. He would finish his run, take a cold shower, and get a fever. He couldn’t figure out why he got the fever. His homeopathic doctor recommended that he not take a cold shower after running. Following this advice, the fevers did not return.

Once I was taking a flying lesson, and the pilot forgot to close the vent on the side of the plane I was on. After the flight, I became extremely cold, could not get warm no matter how many layers of clothes I put on, and had a fever. In addition, I started to become rather anxious and restless.

I thought of Aconitum napellus (monkshood), also known as Aconite. After taking one dose, the entire problem went away within five minutes.

The above are a few homeopathic remedies that can be used for the effects of overexertion.

Homeopathic self-treatment is generally quite safe. However, please check with your physician prior to starting any mode of treatment.

Homeopathy is a system of medicine that has been practiced for the past 200 years. It is a popular mode of medical treatment in North and South America, Europe, India, Australia, and New Zealand.

Dr. McCoy is a licensed physician who has practiced homeopathic medicine for more than 30 years.