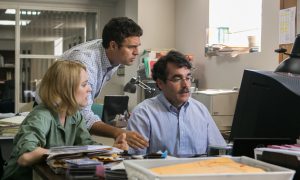 “Our Brand Is Crisis” is an interesting movie to rewatch in this political-crisis time of President Trump versus “President-elect” Biden, as the mainstream media is currently spinning Biden. (The Epoch Times chooses to think of Biden more as “Possible–president-elect” Biden.)

It’s a good reminder of the behind-the-scenes chess matches of professional political handlers, spin doctors, and puppet masters. Campaigns are showbiz, Oz the Great and Terrible, hair and makeup.

Campaigns need to have a “brand” (like “MAGA”), and marketing experts abound. But political spin goes back to ancient Rome: 64 B.C., to be exact. The following is from a letter written to Marcus Tullius Cicero by his younger brother Quintus. Quintus outlined campaign strategies that are still used to this day.

Based on a 2005 documentary by Rachel Boynton, Bullock plays “Calamity” Jane Bodine, a clean and sober, six-years-making-pottery-in-her-mountain-shack, former campaign strategist, who comes out of retirement for a high-noon showdown with her erstwhile ultra-unctuous nemesis Pat Candy (Billy Bob Thornton). But not in the United States. No. They have, in the immortal words of Mike Tyson—”faded into Bolivian.” The Bolivian presidential election, that is.

“Crisis” features a solid Sandra Bullock performance, utilizing her clown-level comedic talent as well as her dramatic gravitas, and while the goings-on are soul-damage-level cynical, she anchors the movie in the idea that ultimately human beings have a true-north of hope and kindness.

Jane’s wiped out by jet lag and in need of an oxygen tank to deal with the elevation of La Paz, Bolivia, but she eventually reenergizes for a little scenery chewing. She’s nicknamed “Calamity,” after all.

Billy Bob’s character throws the first punch by having someone publicly egg Castillo, causing a punch-down ruckus, which Jane spins into Castillo being a no-nonsense, manly-man fighter for the people.

And what does a manly fighter need? A cause to fight! Therefore, Bolivia must be in … some kind of crisis? We’re never sure which crisis that might be, and neither, probably, are the good people of Bolivia. But it gives this “fighter” (read: short-tempered, self-centered, lying, predatory politician) Castillo, something to, you know, fight for the people for.

Will they succeed in spinning Castillo to victory? Will Jane’s manic-depressiveness derail her, especially when Thornton’s Pat Candy reminds her of the near-fatal consequences that her previously all-or-none level of commitment to winning had on her, which was why she gave up the political life, moved to mountain seclusion, and, career-wise, faded into Bolivian, er, oblivion?

The movie is enjoyably fast-paced but never quite fever-pitch, edge-of-your-seat engaging. The cinematography captures a lot of white, as in the lighting of places of high elevation, which adds a certain coldness to the proceedings.

All performances are satisfactory, although given the subject matter, it’s hard to care for any of the characters, with the exception of Bullock and the character of Eddie (Reynaldo Pacheco), a star-struck young teen overcome with idealism and awe for candidate Castillo, whose trust and fealty is dashed in a truly heartbreaking manner.

Turning Over the Rock

“Crisis” is similar to 2015’s “Sicario” in that it offers a chance to look at the dirty tricks, morally gray areas, and the rationalizing of how ethically ambiguous means might appear to justify the end, delivering a “greater good.” But that is not what they actually deliver.

Good governing in politics always contains an inhibiting factor of corruption; elections can be bought, and as we’ve now extensively experienced in the current American election—voting machines can be tampered with. And those willing to say anything to get elected, like, for example, “president-elect,” once in office can betray the electorate.

What “Crisis” does and, more importantly, what Sandra Bullock does is show us the toll that all this betrayal of the truth can have on an individual. And even better, through her character arc, it reveals the evolving, up out of the pit of cynicism, that her sobriety and mountain retreat ultimately bring to bear.

Bullock gets to show her full range. Her brand is still funny (if somewhat muted here); it’s why we always like her, still, here, at the “advanced” age of 51, when Hollywood becomes a place where older actresses go to die. Bullock’s exceptionally likeable. You never don’t like Sandra Bullock.

In a recent Epoch Times article by a former Special Forces officer, he warned: “What I see happening is a Marxist insurgency that’s using a color revolution to affect regime change.”

That’s, of course, a whole different ball of wax; that’s “spin” on steroids. He goes on to say:

“What you’re getting from me, this is supported in all older unconventional warfare doctrines,” the officer said. “You could go to our manuals and pull from them the information I’m telling you. This isn’t from someone who’s a rabid Trump supporter. This is what’s happening.”

Watch “Our Brand Is Crisis,” and let us remind ourselves that if the above scenario is truly happening, then America’s brand is truly in crisis, with the distinct possibility of America’s former greatness fading into Bolivian.

However, all across this great nation, people who value the American Constitution are focusing on hope, and prayers float skyward like sparks of a great bonfire. Kind of like former President Bush Sr.’s “Thousand points of light.” But in the millions.