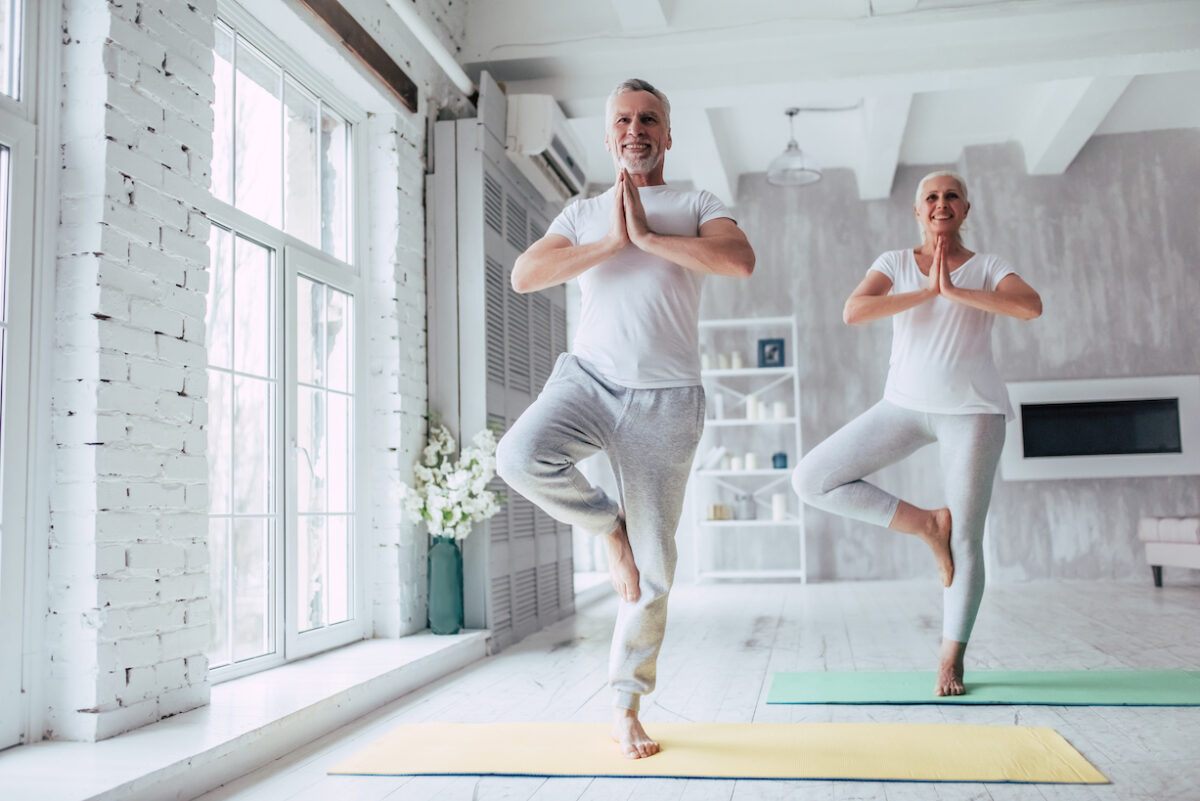 Staying strong and fit may be the best way to protect our bones as we age. (4 PM production/Shutterstock)
Bone Health

Osteoporosis in Aging: Protect Your Bones with Exercise

Bones feel solid, but the inside of a bone is actually filled with holes like a honeycomb. Bone tissues are broken down and rebuilt all the time. While some cells build new bone tissue, others dissolve bone and release the minerals inside.

As we get older, we begin to lose more bone than we build. The tiny holes within bones get bigger, and the solid outer layer becomes thinner. In other words, our bones get less dense. Hard bones turn spongy, and spongy bones turn spongier. If this loss of bone density goes too far, it’s called osteoporosis. More than 53 million people nationwide either already have osteoporosis or are at high risk due to weak bones.

It’s normal for bones to break in bad accidents. But if your bones are dense enough, they should be able to stand up to most falls. Bones weakened by osteoporosis, though, are more likely to break.

“It’s just like any other engineering material,” says Dr. Joan McGowan, an NIH expert on osteoporosis. If you fall and slam your weight onto a fragile bone, “it reaches a point where the structures aren’t adequate to support the weight you’re putting on them.”

Broken bones can lead to serious problems for seniors. The hip is a common site for osteoporosis, and hip fractures can lead to a downward spiral of disability and loss of independence. Osteoporosis is also common in the wrist and the spine.

The hormone estrogen helps to make and rebuild bones. A woman’s estrogen levels drop after menopause, and bone loss speeds up. That’s why osteoporosis is most common among older women. But men get osteoporosis, too.

“A third of all hip fractures occur in men, yet the problem of osteoporosis in men is frequently downplayed or ignored,” says Dr. Eric Orwoll, a physician-researcher who studies osteoporosis at Oregon Health and Science University. Men tend to do worse than women after a hip fracture, Orwoll says.

Experts suggest that women start getting screened for osteoporosis at age 65. Women younger than age 65 who are at high risk for fractures should also be screened. Men should discuss screening recommendations with their health care providers.

Screening is done with a bone mineral density test at the hip and spine. The most common test is known as DXA, for dual-energy X-ray absorptiometry. It’s painless, like having an X-ray. Your results are often reported as a T-score, which compares your bone density to that of a healthy young woman. A T-score of −2.5 or lower indicates osteoporosis.

There’s a lot you can do to lower your risk of osteoporosis. Getting plenty of calcium, vitamin D, and exercise is a good start, Orwoll says.

Calcium is a mineral that helps bones stay strong. It can come from the foods you eat—including milk and milk products, dark green leafy vegetables like kale and collard greens—or from dietary supplements. Women over age 50 need 1,200 mg of calcium a day. Men need 1,000 mg a day from ages 51 to 70 and 1,200 mg a day after that.

Vitamin D helps your body absorb calcium. As you grow older, your body needs more vitamin D, which is made by your skin when you’re in the sun. You can also get vitamin D from dietary supplements and from certain foods, such as milk, eggs, fatty fish, and fortified cereals. Talk with your health care provider to make sure you’re getting a healthy amount of vitamin D. Problems can arise if you’re getting too little or too much.

Smoking, in contrast, weakens bones. Heavy drinking does too—and makes people more likely to fall. Certain drugs may also increase the risk of osteoporosis. Having family members with osteoporosis can raise your risk for the condition as well.

The good news is, even if you already have osteoporosis, it’s not too late to start taking care of your bones. Since your bones are rebuilding themselves all the time, you can help push the balance toward more bone growth by giving them exercise, calcium, and vitamin D.

Several medications can also help fight bone loss. The most widely used are bisphosphonates. These drugs are generally prescribed to people diagnosed with osteoporosis after a DXA test, or to those who’ve had a fracture that suggests their bones are too weak. Bisphosphonates have been tested more thoroughly in women, but are approved for men too.

Researchers are trying to develop drugs that increase bone growth. Two are now available that are related to parathyroid hormone, which helps the body use and store calcium. These drugs are approved to help build bone in people with osteoporosis who are at high risk for having a fracture.

Another important way to avoid broken bones is to prevent falling and occasions for fracture in the first place. Unfortunately, more than 2 million so-called fragility fractures (which wouldn’t have happened if the bones had been stronger) occur nationwide each year. “To reduce the societal burden of fracture, it’s going to take a combined approach of not only focusing on the skeleton but focusing on fall prevention,” says Dr. Kristine Ensrud, a physician-researcher who studies aging-related disorders at the University of Minnesota and Minneapolis VA Health Care System.

Many things can affect the risk for a fall, such as how good a person’s balance is and how many trip hazards are in the environment. The kind of fall matters, too. Wrist fractures often occur when a person falls forward or backward. “It’s the active older person who trips and puts her hand out,” McGowan says. Hip fractures often arise when a person falls to the side. Your hip may be strong enough to handle weight that goes up and down, but not an impact from another direction.

“That’s why exercise that builds balance and confidence is very good at preventing fractures,” McGowan says. For example, she says, tai chi won’t provide the loads needed to build bone mass, but it can increase balance and coordination—and make you more likely to catch yourself before you topple.

NIH-funded researchers are looking for better ways to tell how strong your bones are, and how high your chances are of breaking a bone. For now, though, the DXA test is the best measure, and many seniors, even older women, don’t get it, Ensrud says. If you’re concerned about your bone health, she adds, “Ask your health care provider about the possibility of a bone density test.”

To prevent falls at home: