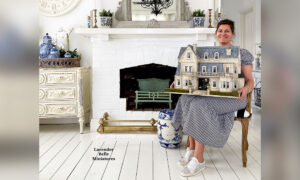 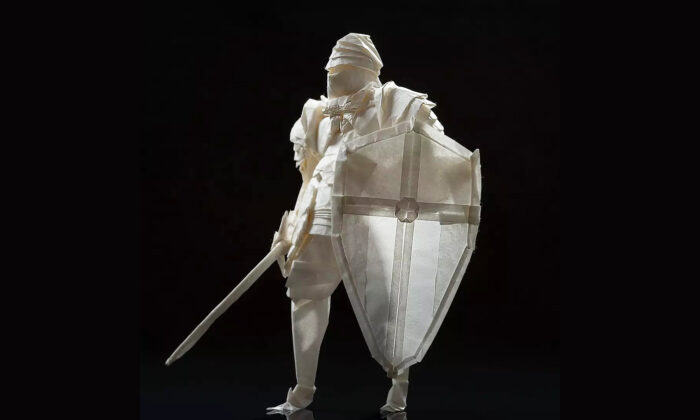 The Japanese artform of origami is a craft of elegant simplicity, and any hopeful origami practitioner knows the challenges in creating artwork from folding a single piece of paper.

One professional origami artists from Finland, Juho Könkkölä, who’s enjoyed origami from a very young age, started innovating sophisticated origami fantasy figures “out of boredom” in 2018. Juho labored to produce his own original origami figure designs, the first to roll off the line being a marvelous “outlaw” equipped with a shield and sword—not composite parts affixed together, but a single piece as a whole.

Just this past summer, the artist, who always seeks to improve upon and perfect his designs, completed his fourth version of the outlaw, “Knight, 2021,” creating a full-fledged knight in shining armor, complete with a very long sword and battle shield with a cross design. He posted a timelapse video of himself making the paper masterpiece on YouTube, authenticating that the knight is indeed composed from one piece of paper—no cuts.

That said, much preparation went into folding the final piece; several dry runs were made on practice sheets to test and perfect a plan of attack; a fold pattern was drawn; and the paper had to be painstakingly “pre-creased” vertically, horizontally, and diagonally; before what was to become the final piece was folded.

“The key components to origami art are the piece of paper and your artistic vision. It’s that simple,” he told The Epoch Times. “Just your thoughts, your hands and the material you work on. The thought part might be quite complex in contrast to that concept, though.”

The knight was folded from a piece of Wenzhou rice paper measuring 68 by 68 centimeters; which materially itself is not conducive to folding, and so needed to be treated with a methyl cellulose solution to facilitate better folds. The rice paper is so thin that some parts of the final piece, such as the knight’s sword-hand palm, are folded 50 times over, something only this type of paper would allow. The finished knight stands 18 centimeters in height.

Check out Juho’s most impressive origami knight in shining armor folded from a single piece of paper:

The biggest challenge working in origami, Juho said, is overcoming how limited the artform is. “It is not a simple task to create an idea that is in your mind by folding a square piece of paper. The process to make ideas to a finished original piece requires years of practice to do well,” he added.

“When I started designing my own figures, I embraced these limitations, I let them dictate the character ideas. First designs were hooded figures, because I didn’t know how to make a head or a face. Nowadays, with enough practice, I find much less limited by the square and the art.”