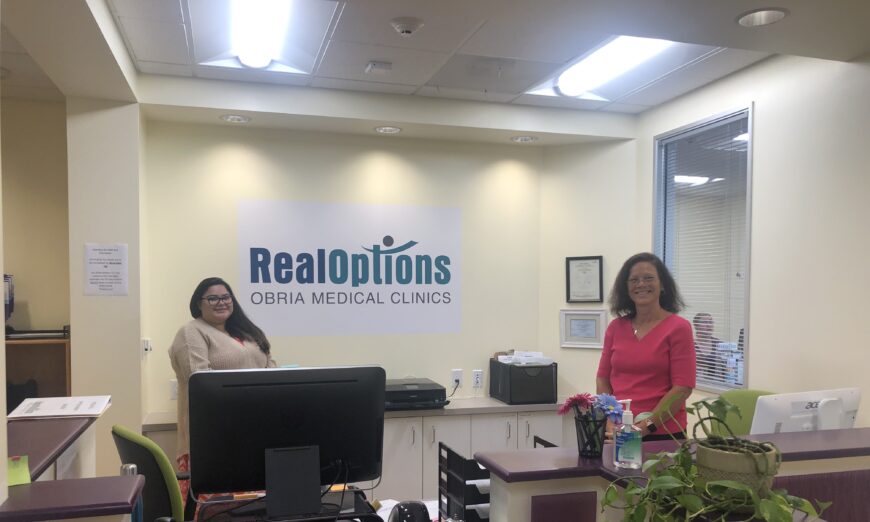 A small reproductive health organization in the Bay Area is providing alternatives to abortion near some Planned Parenthood locations.

RealOptions Obria Medical Clinics has a mission “to help you understand all of your options so that you can make an informed decision.”

“Women deserve the truth and full information,” said RealOptions CEO Valerie Hill during an Epoch Times interview at her facility in the central San Jose area. The facility is only three doors away from the nearby Planned Parenthood.

“Women who don’t have their insurance yet can come. We keep them in our clinic through the second trimester and we offer them prenatal care,” said Hill when describing their low-cost to no-cost model of service.

For women without health insurance, most services from RealOptions are free, while a minimal fee of $30 will be charged for lab tests.

“We want them [pregnant women] to feel support and caring to make them strong to choose hope,” Hill said.

In its December newsletter, RealOptions stated that its three clinics in the Bay Area “rescued and saved over 6,200 people from the danger or harm of unknown or silent sexually transmitted diseases, and we preserved over 1,600 parents and over 800 pre-born children from abortion” in this past year.

The newsletter also stated, “Since 2011 when we started our patient outreach marketing and strategically relocated our medical clinics near Planned Parenthood clinics, we have saved 12,550 parents and 6,275 children from abortion.”

A video put online by RealOptions presents the personal story of Toma, a woman who received service from the organization.

Toma grew up in an American family that adopted her from Russia. She was a flight attendant before she found out she was seven-months pregnant through a casual relationship. Being single, she didn’t feel she had the necessary means to raise her daughter and was afraid of being put in the situation of receiving welfare.

Through the adoption support service offered by RealOptions, Toma was able to choose an adoptive family for her daughter.

She’s been able to visit her daughter after the adoption. “Every time I see her, there’s not a second that goes by where I’m regretting it. She’s a happy baby. She’s loved by everyone, and by me. It’s one of the best situations that I could have found for my daughter,” Toma said in the video.

When asked why RealOptions provides STD tests, Hill said that some STDs such as gonorrhea and chlamydia are silent. If women receive abortions without knowing they’re being affected, they may become vulnerable to secondary infections such as pelvic inflammatory disease.

Hill said they conduct donation drives in churches and receive financial help and materials donated by people who support the mission of her organization. She also said that doctors at her facilities all work there out of compassion, and nurses only get half of what they would get from standard hospitals such as Kaiser or other health care facilities.

RealOptions was established in 1981. Hill started working as a part-time volunteer for the organization in 1989 and became a full-time executive director in 2007. This year marks her 30-year anniversary dedicated to serving her beloved organization.

Many advocates working at RealOptions are just like Hill.

Donna Hecke is the vice president of Community Outreach and Business Development. She learned of RealOptions 20 years ago from her church. Hecke was an adopted child. Her mom was pregnant when she was 15 and was in no situation to raise Hecke, and she was raised by an adoptive family.

Hecke shared with The Epoch Times why she originally got involved with RealOptions. “What a great opportunity to honor women like my mom to help them [pregnant women] through their difficult times, and to honor my parents who adopted me.”

One unique service provided by RealOptions is called the abortion pill reversal. Hill said that women who take pills for abortion do it through a two-step process. There are 48 hours between taking the first pill and the second pill for the process. If women change their minds within the 48-hour window, “we provide mid-abortion rescue,” Hill said. Since 2017, they’ve helped deliver 17 healthy babies from 15 mothers through the rescue process, she said.

Hill said that they serve their patients in a non-coercive way. “We’re not here to give them our opinions. We’re just here to ask very good questions to our patients so that they can take this safe space and time to think about this decision. They’re making a life-altering decision.”

While most pregnant women visiting RealOptions have abortion on their minds, Hill said that 90 percent of their patients have chosen life for their children. “We want to be the safety net of the life-affirming health care for women so that they can get full information and hopefully make decisions that they can live with.”