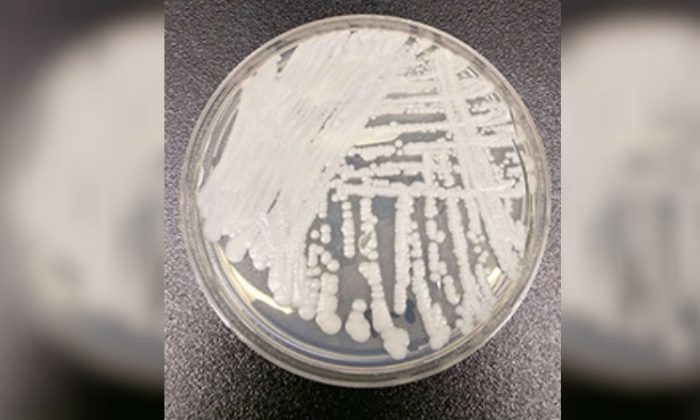 A strain of Candida auris cultured in a petri dish at a CDC laboratory. (Shawn Lockhart/Centers for Disease Control)
Health News

A hospital in Salem, Oregon, reported an outbreak of a rare fungal infection that has hospitalized at least three people in the state.

The Oregon Health Authority confirmed three cases of Candida auris at Salem Hospital in Salem, the state’s capital city. The first was detected on Dec. 11, while the second was found on Dec. 23 and a third case was discovered on Dec. 27.

“Two of the cases did not have international health care exposures, but had epidemiologic links to first case, indicating healthcare-associated spread of Candida auris to the second and third patients–identified Dec. 23 and Dec. 27, respectively,” said a bulletin from the state health agency.

An investigation into the rare fungal outbreak is underway, officials said. The U.S. Centers for Disease Control and Prevention (CDC) is also involved.

“Candida auris is an emerging pathogen of concern because it can cause serious infections, particularly in those with serious medical problems, and can be resistant to the antifungal drugs we have to treat it,” said Rebecca Pierce, with the Oregon Health Authority, in a news release.

Candida auris is a type of yeast fungus that is highly resistant to antifungal drugs and is considered difficult to detect, making it tricky to treat in infected patients. It was discovered in the United States in 2013, coming about four years after it was first detected in Japan

It can cause “a severe infection in hospital or nursing home patients,” federal officials say. “These patients are often already very sick … infections often do not get better with the antifungal medicines that usually treat candida infections.”

Upon entering the body, the fungus can cause severe infection of the organs or bloodstream, likely occurring more often in individuals with weakened immune systems, according to federal officials. What’s more, it can be spread via contact with objects or equipment that have been infected.

Hospital or long-term nursing home patients can be colonized with Candida auris and “can spread it to objects in the facility, such as bedside tables and handrails,” officials say.

The CDC’s website has called Candida auris a “serious global health threat,” reporting some 1,156 clinical cases of the yeast fungus in states stretching across the United States.

Jasmin Chaudhary, the director of infection prevention at Salem Health, said her hospital system is taking action to prevent the spread of the fungus.

“With the COVID-19 pandemic, we have seen a rise in multi-drug resistant organisms around the world and nationwide, and Salem is not immune,” Chaudhary added, noting that  some “proactive steps” are being implemented  to “assist in preemptively identifying new cases to prevent spread.”