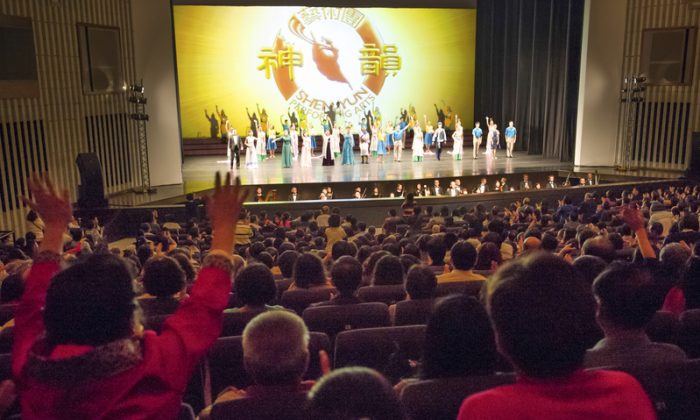 KAOHSIUNG, Taiwan—On the evening of March 5, Shen Yun’s interpretation of pure art deeply touched Lin Jingxiu, the director of Keyfantasy Philharmonic Orchestra, who saw the show for the second time. She said, “Shen Yun’s achievements in dance and music really awed people in music circles, including those who teach music like us. It’s really wonderful.”

“Last year, I saw Shen Yun show for the first time,” Ms. Lin said. “Because I heard that Shen Yun puts out a new lineup of programs every year, I came back again out of curiosity. I found that it is really different, and its dance and music are truly amazing. … I think Shen Yun is the number one show worldwide.”

“The seamless integration of dance, music and digital backdrops contributes to the artistic achievement. I think it is really great,” she said.

Through classical Chinese dance, folk dances, and a live orchestra comprised of both Western and Chinese instruments, the New York-based company brings to life 5,000 years of divinely inspired civilization.

Enchanted by Shen Yun Orchestra’s seamless coordination with the dances, Ms. Lin said, “The dances performed by Shen Yun artists include classical dance, folk dance, and other traditional dance, and all of them let modern people like us feel [Shen Yun’s] spirit, which I think is very important. The arrangement of music and the choreography of dance are the other elements that make us feel enjoyment.”

Ms. Lin was very grateful for and respectful of the great efforts Shen Yun dancers have made behind the scenes. She noted, “Although I am in the music circle and teach music, I think Shen Yun’s artistic values are beyond words. So, I’m very grateful that Shen Yun brought such an exquisite performance to Taiwan.”

Ms. Lin would recommend Shen Yun to friends: “I also hope that those who know about music and dance, including backdrop designers and others who don’t know much about the arts will be able to appreciate the magnificence of Shen Yun. Shen Yun blends many elements, including dance choreography, [and] music arrangement.”

“I think I have opened another bright window for my soul after watching the Shen Yun’s show today. … As to Shen Yun, the only word I would like to say is awesome!”

“I certainly will come to watch Shen Yun again next year, and I will bring all the students in our orchestra to appreciate the show,” Ms. Lin said.

Rong-Xian Deng, chairman of Performing Artists Union of Kaohsiung, an enthusiastic fan of Shen Yun, who has watched Shen Yun show many times, also made it to Kaohsiung Cultural Center on March 5 to attend Shen Yun.

Seeing Shen Yun brings the essence of the traditional Chinese culture back to life on stage through the artistic performance of pure sincerity, abundant compassion and beauty, Mr. Deng said, “Shen Yun show is one of the best in the world.”

“Shen Yun’s (digital) backdrops and all the performers are really [so] excellent that the show is a world class performance. Every program is marvelous. I can tell performers have an excellent foundation.”

He also mentioned that he marveled at Shen Yun’s great success in producing so many outstanding artists and added that it would be great if Shen Yun could perform more shows in Taiwan.

Finally, he said that such high-level performance presented by Shen Yun is not easy to come by, and he would recommend it to his friends.

‘The music soothed me’

City councilor Tsai Chin-Yen watched his first Shen Yun show on March 4 and his experience in the Cultural Center was incredible. “Marvelous!” he said after the performance. “This is a feast of perfect blending of sound and light. The dance moved me, yet the music soothed me. I didn’t waste one second in there.”

Mr. Tsai came to the realization after the show that there weren’t many performances of classical Chinese dance around.

“It wasn’t until today that I realized that classical Chinese dance existed a long time ago, and it is rarely seen these days,” Mr. Tsai said.

What impressed him the most was that there were stories telling people to be kind. “Many touching stories were presented with dance and music. I think it helps to improve the morality in society.”

There was a large-scale gas explosion in Kaohsiung last year. Shen Yun dedicated one show to the victims of the gas explosion. Mr. Tsai was grateful for what Shen Yun did. “The performance has a pronounced soul-soothing effect I believe.”

Mr. Tsai said that he would definitely come back with friends next time Shen Yun is in Kaohsiung,

“The emcees said that Shen Yun has different programs every year. I look forward to it. I will tell my friends that they must see it for themselves.”