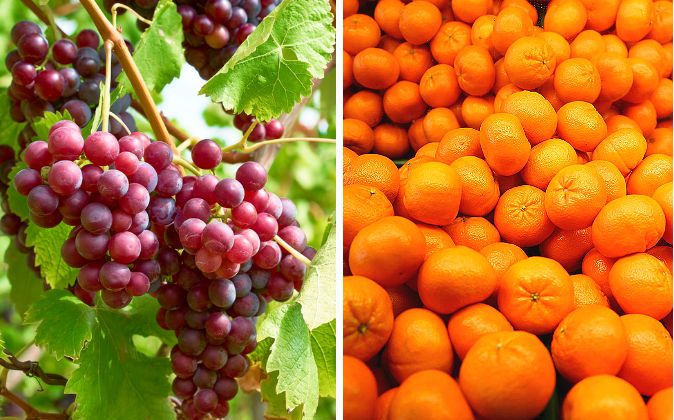 “This is an incredibly exciting development and could have a massive impact on our ability to treat these diseases,” says Paul Thornalley, a professor in systems biology at the University of Warwick Medical School. “As well as helping to treat diabetes and heart disease, it could defuse the obesity time bomb.”

When participants received both compounds—trans-resveratrol (tRES) in red grapes and hesperetin (HESP) in oranges—at pharmaceutical doses, the compounds acted in tandem to decrease blood glucose, improve the action of insulin, and boost the health of arteries.

As well as helping to treat diabetes and heart disease, it could defuse the obesity time bomb.

After eight weeks on the treatment, researchers noted an improvement in insulin resistance in trial participants that was similar to improvements seen six months after bariatric surgery.

The compounds work by increasing a protein called glyoxalase 1 (Glo1) in the body that neutralizes a damaging sugar-derived compound called methylglyoxal (MG).

For the study, researchers increased Glo1 expression in cell culture and then tested the formulation in a randomized, placebo-controlled crossover clinical trial.

Thirty-two overweight and obese people between the ages of 18 and 80 age who had a BMI between 25 to 40 took part in the trial. They were given the supplement in capsule form once a day for eight weeks. They were asked to maintain their usual diet and their food intake was monitored via a dietary questionnaire. They were also asked not to alter their daily physical activity.

Changes to their sugar levels were assessed by blood samples, artery health measured by artery wall flexibility, and other assessments by analysis of blood markers.

The team found that the highly overweight subjects who had BMIs of more than 27.5 with treatment displayed increased Glo1 activity, decreased glucose levels, improved working of insulin, improved artery function, and decreased blood vessel inflammation. There was no effect for those taking the placebo.

“Obesity, type 2 diabetes, and cardiovascular disease are at epidemic levels in westernized countries,” Thornalley says. “As exciting as our breakthrough is, it is important to stress that physical activity, diet, other lifestyle factors, and current treatments should be adhered to.”

Although the same compounds are found naturally in some fruits, the amounts and type required to see the same effects cannot be obtained by eating more fruit. Pharmaceutical doses could be administered in capsule form.

This article was previously published by University of Warwick.  Republished via Futurity.org under Creative Commons License 4.0. Innovate UK funded the work, which appears in the journal Diabetes.