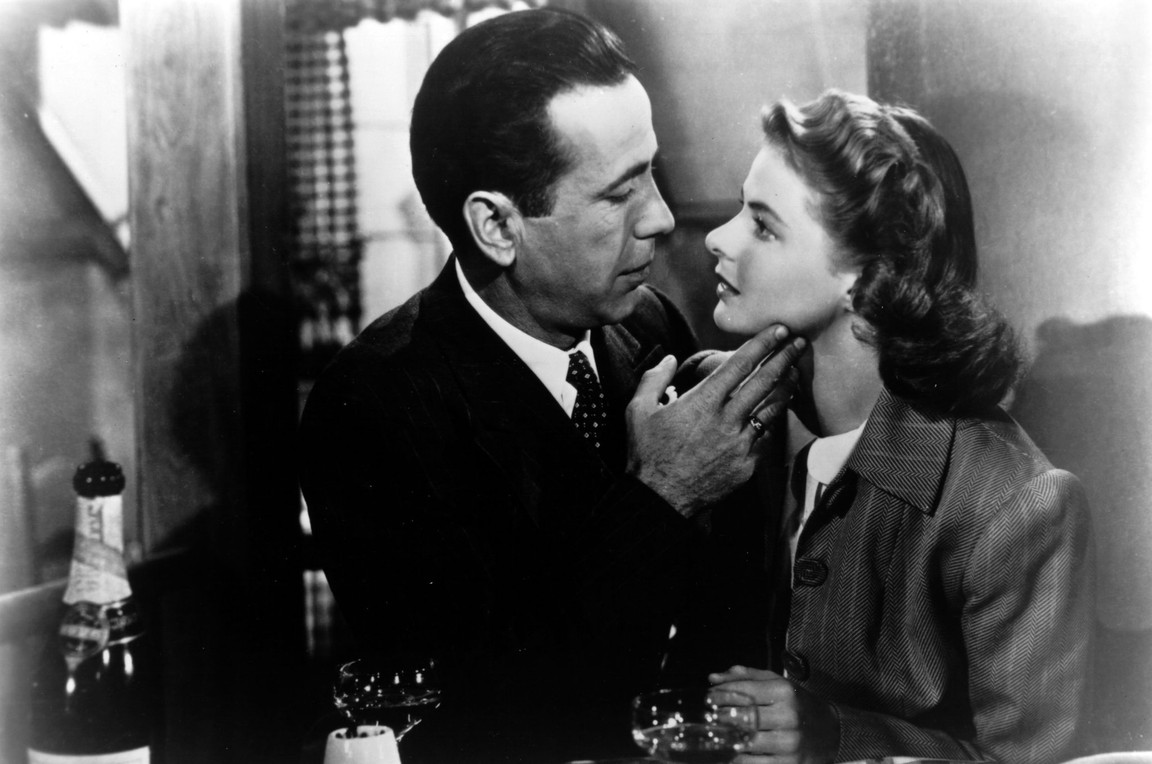 Here's looking at you, kid," one of Rick's (Humphrey Bogart) most famous lines to Ilsa (Ingrid Bergman) in "Casablanca." Warner Bros. (Fair Use)
Traditional Values

One Woman’s Quest to Restore American Values Through Classic Movies

“I believe that God made us story-telling creatures,” says Onalee McGraw, a passionate fan of Hollywood’s Golden Age and co-founder of a classic film studies program called the Educational Guidance Institute (EGI).

McGraw’s remark seems beyond dispute. Our distant ancestors gathered around fires at night and in the throne rooms of kings to tell of their exploits in hunting and war. Centuries later, troubadours sang of legendary nobles and warriors such as El Cid and King Arthur to enrapt audiences. More time passed, and in the parlors of New England, the family gathered for read-alouds from such literature as the Bible, poetry, and the novels of Charles Dickens. Down South, their counterparts circled up their chairs and rockers on the porch, where Grandpa would entertain young and old with family lore.

These exchanges were not only entertaining, but also educational. The exuberant hunters were passing tips along to the younger men. Those parents and their children in Massachusetts gained strength from the Scripture and verses they shared. Those who exchanged stories about Uncle Bud talking possums out of trees and living alone for a month in the bayou were building bridges between the past and the present.

We do the same today. We read the little ones fairy tales at bedtime; we talk with a friend about the best restaurant in town and then amuse him with a story from the last time we dined there; we read Mark Helprin’s novel “A Soldier of the Great War” and acquire courage and wisdom.

The same holds true for the movies we watch, which, after all, are stories. We sit in a theater or our living room, and find ourselves moved and enchanted by words and images on a screen. And sometimes, like those yarns and narratives once spun by the light of a fireplace or to an orchestra of crickets, these movies can change hearts and lives for the better.

A Life in Brief

“I was 7 years old when I saw ‘It’s a Wonderful Life’ the year it was released,” McGraw said. “I can still remember watching that movie in the theater.” She smiled after that remark.

“There. Now your readers can tell how old I am.”

McGraw came of age during the post-World War II era in San Luis Obispo, California, a childhood she remembers fondly.

“We had the generation that fought the war and came back and made their home there,” she said. Several of these veterans taught in the high school she attended, where she received a classical education.

McGraw then entered Whittier College, during which time she spent a semester at Washington’s historically black school, Howard University, which elevated her exposure to the growing civil rights movement in the United States. Graduating in 1961, she entered Georgetown University as a graduate student in political science, where, she said, natural law proponent Heinrich Rommen’s “Just War” seminar was one of the highlights of her studies. In 1970, she received her doctorate, specializing in American political theory.

In the following years, McGraw worked as a specialist on education at The Heritage Foundation, appearing at one point on Phil Donahue’s talk show to discuss classical education and the values clarification programs then popular in some schools. Later, she received a presidential appointment from Ronald Reagan and served two terms with the National Council on Educational Research.

In 1963, she married William Francis McGraw, her husband of 46 years until his death in 2012. Their marriage produced three children and 15 grandchildren.

The Institute Is Born

“Around the age of 10,” McGraw says in a documentary on the EGI website, “I really was obsessed, frankly, with movies.”

Nearly 40 years later, that obsession gave rise to a dream: to share classic movies made before the mid-1960s with younger people so that they might “recover their moral imagination and their cultural memory.”

Inspired by writers such as Robert Coles, author of “The Moral Life of Children,” and seeing the need for standards and “the structured architecture of truth, goodness, and beauty,” McGraw teamed up with a friend, Margaret Whitehead, and the two women launched their mission to bring great films into classrooms, churches, and youth detention centers. They founded EGI as a vehicle for promoting older movies and a means for learning about virtues, about love and family, and about life in general.

Some films they recommended and screened in the first years of their enterprise were “Johnny Belinda,” the story of a tangled relationship between a doctor and a young deaf-mute woman; “No Way Out,” with Sydney Poitier playing a young black doctor persecuted by a rabid racist (Richard Widmark); “It’s a Wonderful Life”; “Key Largo”; and “High Noon.”

One film central to EGI’s efforts is “A Raisin in the Sun,” which again stars Poitier and depicts a family experiencing racial prejudice when they purchase a home in a white neighborhood. At a conference in 1992 at the University of Virginia, where Coles was one of the speakers, McGraw and Whitehead both were struck by his account of the influence of that movie on one of the black children who had faced hatred and threats of violence when she had walked into a previously segregated elementary school.

Bearing the Weight of Love and Truth

At a detention home for troubled youth, where most of the young men—boys, really—were angry and depressed, a teacher announced that they were going to watch “It’s a Wonderful Life,” the black-and-white movie that was older than anyone in the audience, in a showing sponsored by EGI. According to McGraw, some of the detainees threatened to rip the film out of the VHS player even before it started, but by the end, they were saying, “This is the best movie we’ve ever seen.”

McGraw and her co-workers understand that these classics of the silver screen possess the power to embed in people—not just our youth, but all of us—truths about love, family, honor, justice, and other virtues. In a 2020 article posted on her website under the header “Word on Fire,” McGraw neatly sums up the universal appeal of these old movies and why watching them can make us better human beings or, in some cases, save us from deadly mistakes and disasters:

“The greatest of the classic films presuppose a moral universe where our power to know, love, and do the good is at the center of the drama. From the mid-1930s to the early 1960s, this art form occupied the center stage of our popular culture.

“God has placed in us a universal yearning for the transcendent. From informal gatherings at coffee shops and college campuses, to structured parish events, high school and college classrooms, and even prison ministries, classic films elevate, educate, and inspire all at the same time.

“One thing is essential: allowing the films themselves to bear the weight of truth as they draw us in. We are participants, not mere observers being entertained.”

A Treasure Trove of Resources

Visiting the EGI website offers more than just a trip down memory lane. There are recommendations, testimonies, free study guides and many others for sale, and reflections from Plato, G.K. Chesterton, and other philosophers and writers on topics ranging from natural law to the transformative power of art.

Follow the links to McGraw’s blog and to her Amazon author page, and you’ll find more of her writings covering cinematic topics like liberty, femininity, and romance. One recent post—“From ‘Me’ to ‘We’ in the Art of Classic Film: 15 Movies That Work to Depolarize Our Civil Society”—addresses the divisions that have fractured our country.

Here, too, you can become acquainted with McGraw herself. In 2014, she appeared with then-host Robert Osborne of Turner Classic Movies to celebrate the 20th anniversary of that TV network and to discuss the film “12 Angry Men.” You might also enjoy her interview with writer John Clark, in which this passionate and sharp-witted movie advocate shares more of her personal side with viewers.

The motto of EGI, “Teaching truth, goodness and beauty through classic movies to the rising generation,” constitutes the very heart of this remarkable program.

As McGraw says in her documentary: “Let’s try to restore our culture with cultural goods. Let’s teach our young people about what these cultural goods are and why they were good.”

In these old films are treasures waiting for a new audience, gold and silver to remind us not only of who we were, but who we can become. And what could be better than that?