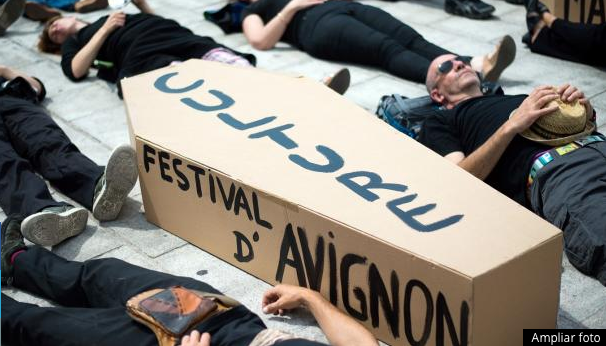 A protest in Marsalla concerning the possible cancellation of the Festival of Avignon, and of culture in general, on July 18 2014. (Bertrand Langlois/AFP/Getty Images)
Arts & Culture

One Week to Save the Summer Festivals of France

Some reform patterns seem destined to periodically repeat and replay themselves. 11 years ago, a reform that tightened up the access conditions on the status of intermittent workers in the entertainment industry were met with anger. Consequently, the Festival of Avignon was cancelled for the first time in its history, as well as the Festivals of La Rochelle, Aix-en-Provence, and Rennes.

Today, a similar threat hangs above the coming summer festivals. According to Olivier Py, director of the Festival of Avignon, the threat of cancellation is serious. “If this agreement is signed, there will be strikes and probably cancellation. There is absolutely no doubt about this,” he said. He expressed his concerns about the dramatic consequences.

Everything should be set before 1st July, the deadline fixed by the French government to meet an agreement between intermittent workers and social partners who had signed a first agreement on 22nd March. The strike of Printemps des Comédiens festival in Montpellier has already started but 21 cultural events have been cancelled.

On the strikers’ side, despite the recent compromises conceded by the government, the anger remains. Contrary to 2003, the problems that the entertainment professions face are complex—the necessity to reform an unfit system and the simple fact that the number of affected workers has increased. in 1990, there were about 50 000 intermittent workers in the entertainment industry. Today, there are about 138 000 of them, which leaves few space for a maneuver.

For Mathieu Grégoire, a sociologist supporting the strikers, this conflict, started by the entertainment workers, affects many precarious workers. “A good inspiration in their regime would be the design for a solution, for a ‘flexible security’ assuring a continued salary to workers in discontinuous employment,” he said.

The 22nd March agreement engaged the responsibility and work of social partners (CFDT, FO and CFTC). In an effort to progressively reduce 18 billion euro of unemployment debt insurance, up 14 billion from 2013, the agreement planned measures allowing safeguards for intermittent workers in the entertainment industry. Other agencies like MEDEF would have happily suppressed it. The aim to reduce the deficit to 300 million thus forced a tightening of the general rules of compensation as well as the conditions of its use.

But it will be difficult for Manuel Valls to go back. After the promise of taking charge of the deficiency periods and planning that those periods would be financed by the state, after promising that supplementary budgets would finance performing arts, the space to maneuver has narrowed. The agencies responsible for applications will have to cope with the workers, unions and the UNEDIC.

Indeed, as explained by Véronique Descacq, CFDT general secretary, renegotiating the existing agreement is “out of the question”. For the MEDEF, “in case the government doesn’t agree, we would not agree to negotiate anything else. Even the agreement on responsibility would fall!” Just this once, Jean-Claude Mailly, general secretary for FO, has joined CFDT and MEDEF, threatening the state with having to change the rules of compensation if it was forced to concede to the requests of protestors.

Redesign the status of intermittent workers

Jean-Patrick Gille’s mission will thus end this week. As a mediator on June 7th, the socialist representative had to succeed in co-ordinating with the different parties, while preserving the existing agreement and maintaining the summer festivals. This mission proves very difficult. Last Friday, the entertainment branch of CGT called for a “massive strike”.

However, the important lesson learnt from those tensions could create an historic opportunity: a complete reform of the status of intermittent working. The government, under Jean-Patrick Gille’s impulse, should open as soon as possible a tripartite coordination with the signatories, the CGT and CGC,who are calling a strike, and the Coordination of Intermittent and Precarious Worker, who, since 2003, have been working on alternative status for these workers and have received wide support from representatives on all fronts. This coordination should last until the end of 2014, arbitrated by three personalities such as Hortense Archambault, former co-director of the Festival of Avignon.