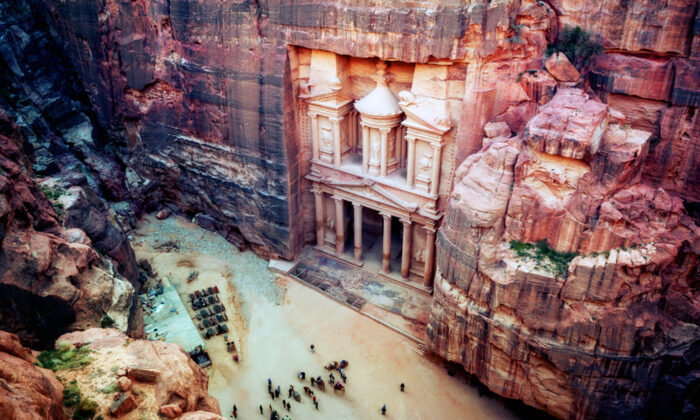 Carved into red sandstone cliffs in southwestern Jordan, the lost city of Petra was the capital of an ancient kingdom. Once a thriving center of trade, having lain in ruins for centuries, Petra is now one of the world’s New Seven Wonders.

Each year, the 102-square-mile site typically attracts over a million visitors to what was once the ancient Kingdom of Nabatean. Yet most tourists only catch a glimpse of its majesty.

Visitors to Petra first follow an almost mile-long winding gorge, known as the Siq, decorated with sculptures of gods and animals along the path, into the center of the recovered architecture. Petra’s “treasury,” called Al Khazneh, is the first sight along the journey.

The structure’s classification as a treasury is a misnomer, for Al Khazneh is actually a tomb.

Archaeologists have yet to find any paraphernalia within, but many suspect the tomb was built for Nabatean king Aretas IV, who ruled Petra at its height, between 9 B.C. and A.D. 40.

Bedouins of the early 20th century believed that an urn on the second floor of Al Khazneh contained the riches of an Egyptian pharaoh, hence the building’s initial mistaken classification.

The Nabateans, a nomadic tribe, built Petra (originally called Raqmu) in the fourth century B.C. to stabilize a thriving network of trade—in Arabian incense, Chinese silk, and Indian spices. The settlement of 30,000 boasted architectural influences from both the Mediterranean and Arab cultures.

In A.D. 106, the city was occupied by the Romans, who absorbed the Nabateans into their empire and added a Greco-Roman expansion.

After the eighth century, its inhabitants fled, and Petra became “lost” for hundreds of years. Only nomadic shepherds remained, who used Petra’s abandoned structures to shelter their livestock and themselves.

Eventually, Swiss explorer Johann Ludwig Burckhardt rediscovered Petra in 1812 on a journey to Syria—disguised as a Bedouin named Sheikh Ibrahim Ibn Abdallah—becoming the first Westerner ever to view the once-glorious city.

“An excavated mausoleum came in view, the situation and beauty of which are calculated to make an extraordinary impression upon the traveler,” Burckhardt wrote in an account of his travels.

Western explorers flocked to newly discovered Petra to marvel at its beauty and study its architecture.

In December 1993, scrolls written in Greek, dating back to the Byzantine period, were found in an excavated church near Petra’s Winged Lion Temple. Researchers at the American Center of Oriental Research in Amman studying the scrolls hope to shed light on the city’s centuries-long vacancy.

In the meantime, the enormity of the find, and its enigmatic history, have made it a favorite in filmmaking; the city of Petra has played host to movies like “Indiana Jones and the Last Crusade,” “The Mummy Returns,” and “Aladdin.”

In 1985, the city was declared a UNESCO World Heritage site. In 2007, it became one of the New Seven Wonders of the World, captivating audiences to this day.