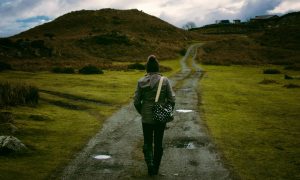 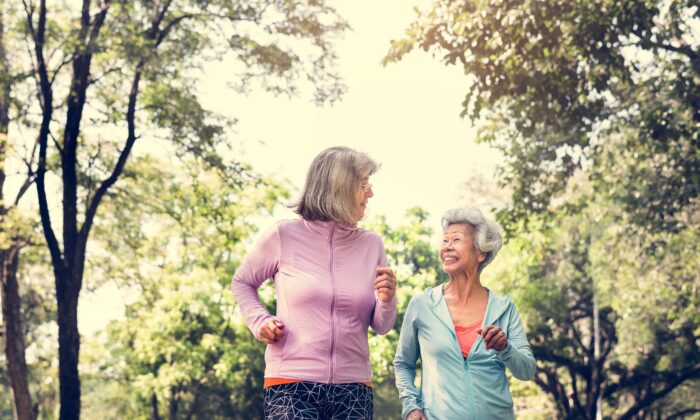 Walking can prevent hypertension and lowers the risk of being hospitalized for heart failure.(Rawpixel.com/Shutterstock)
Mind & Body

Women who walk 30 minutes a day may have a significantly lower risk of developing high blood pressure, new research shows.

Further, women who don’t walk 30 minutes—the federal physical activity guideline of moderate activity—but do walk at 2 mph (a 30-minute mile) or faster, still have a reduced risk of hypertension, according to the study in the journal Hypertension.

Another study of more than 80,000 postmenopausal women aged 50 to 79 in Circulation: Heart Failure reports that more time spent in sedentary behavior while awake, such as sitting or lying on the couch, is associated with a higher risk of hospitalization for heart failure.

In fact, women who spent more than 9.5 hours per day sitting or lying down had a 42 percent higher risk of developing heart failure during the nine years after first assessing sedentary time through the Women’s Health Initiative Observational Study.

The finding was evident even after accounting for physical activity levels and heart failure risk factors such as hypertension, diabetes, obesity, and heart attack.

Taken together, the two papers send a powerful message, said Michael LaMonte, research associate professor of epidemiology in the University at Buffalo’s School of Public Health and Health Professions.

LaMonte is the first author of the Circulation: Heart Failure study and senior author of the Hypertension paper. Both studies relied on data collected over time from participants in the Women’s Health Initiative.

“The WHI participants have provided us information on the importance of walking, regular activity, and avoidance of sedentary time in prevention of both hypertension and heart failure,” said Jean Wactawksi-Wende, co-author of both studies and dean of the School of Public Health and Health Professions. “Walking and moving are simple activities that can be easily integrated into our daily lives.”

The Hypertension study found that brisk walking—identified as a 30-minute mile—for 150 minutes or more per week is associated with a lower risk of hypertension in older women.

“Our work adds to growing evidence that you don’t necessarily have to be an avid jogger or cyclist to gain health benefits from physical activity,” said Connor Miller, first author of the Hypertension paper, which he worked on while obtaining his master’s in epidemiology.

“Just going for regular walks can have meaningful impact on important risk factors for cardiovascular disease, in this case, blood pressure. This is especially important to appreciate for older adults, because walking is an accessible activity for all ages,” Miller said, now an epidemiologist at Roswell Park Comprehensive Cancer Center.

Few studies have evaluated hypertension in relation to walking, a common physical activity among adults. Miller and colleagues examined the association between walking and hypertension incidence in 83,435 postmenopausal women between the ages of 50 and 79 who had no known hypertension, heart failure, coronary heart disease, or stroke, and reported the ability to walk at least one block without assistance.

“To put it simply, get your steps in, and try to make them quick,” Miller said.

If further studies confirm the group’s findings, it’s possible that a randomized clinical trial could be established to evaluate walking for the primary prevention of high blood pressure in adults, Miller said.

“When recommending ways for a patient to modify lifestyle factors, clinicians can use this research to emphasize that even a relatively minor behavioral change—in this case, going for walks regularly—is a step in the right direction for cardiovascular health,” Miller said.

Sitting Around and Heart Failure

The study published in Circulation: Heart Failure was a follow up to a 2018 paper that was the first to show an association between increased physical activity and reduced risk of heart failure.

During an average of nine years of follow-up, 1,402 women were hospitalized due to heart failure. Compared with women who reported spending less than 6.5 hours per day sitting or lying down, the risk of heart failure hospitalization was:

Compared with women who reported sitting less than 4.5 hours a day, the risk of heart failure hospitalization was:

Researchers saw a 42 percent higher risk of developing heart failure among women who were sedentary for more than 9.5 hours per day, even after accounting for several factors, including age, race-ethnicity, and menopausal hormone therapy use.

“Even among women who reported recreational physical activity levels that meet current guidelines, heart failure risk was elevated in the women who also reported more than 9.5 hours per day in sedentary activity,” LaMonte said. “This latter finding points to the need to not only promote more physical activity for heart failure prevention, but to also promote interruption of sedentary time throughout the day.”

The team will soon have results from a separate WHI study using accelerometers, which will show that simply standing up to break up sedentary time is associated with a lower risk of cardiovascular disease.

Sedentary behavior promotes poorer cardiometabolic risk factor profiles, which increases the likelihood of onset and progression of arterial atherosclerosis and blood clots in arteries, LaMonte explains. These are precursors to angina and heart attack, of which heart failure is a major consequence. Sedentary time also reduces the pumping effectiveness of the heart, which is a major manifestation of clinical heart failure.

“Whether sedentary time directly causes reduced cardiac pumping effectiveness or exacerbates the effect of some other cause remains unclear. An observational study like ours cannot disentangle these complex mechanistic questions,” LaMonte said.