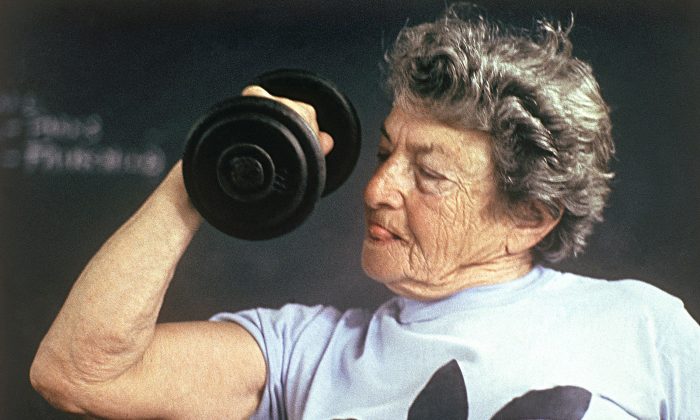 Older adults who strength trained at least twice a week had 46 percent lower odds of death for any reason than those who did not, according to a survey of 30,000 people.

Many studies have previously found that older adults who are physically active have better quality of life and a lower risk of mortality. Regular exercise is associated with prevention of early death, cardiovascular disease, diabetes, and some cancers.

But while the health rewards of physical activity and aerobic exercise are well established, less data have been collected on strength training, perhaps because strength-training guidelines are newer than recommendations for aerobic activity.

Although the American College of Sports Medicine first issued aerobic exercise guidelines decades ago, it was not until 2007 that the organization and the American Heart Association released a joint guideline recommending that all adults strength train at least twice a week.

“This doesn’t mean that strength training wasn’t a part of what people had been doing for a long time as exercise, but it wasn’t until recently that it was solidified in this way as a recommendation,” says Jennifer L. Kraschnewski, assistant professor of medicine and public health sciences at the Penn State College of Medicine.

Greater amounts of muscle strength are associated with lower risk of death.

Over the past decade, researchers have begun to demonstrate benefits of strength training for strength, muscle mass, and physical function, as well as for improvements in chronic conditions such as diabetes, osteoporosis, low back pain, and obesity. Small studies have observed that greater amounts of muscle strength are associated with lower risk of death.

To look at the mortality effects on older adults who meet strength-training guidelines, researchers examined data from the 1997-2001 National Health Interview Survey (NHIS) linked to death certificate data through 2011. The findings are published in the journal Preventive Medicine.

The NHIS collects overall health, disease, and disability data of the US population from a nationally representative sampling of all 50 states and the District of Columbia. The 1997-2001 survey included more than 30,000 adults age 65 and older.

7 Reasons Why Everyone Should Strength Train

During the survey period, more than 9 percent of older adults reported strength training at least twice a week. “That’s only a small fraction of the population, but it’s actually higher than we had anticipated,” Kraschnewski says.

The researchers followed the respondents for 15 years through death certificate data from the National Center for Health Statistics National Death Index. About a third of respondents had died by 2011.

Further, older adults who met strength-training guidelines were, on average, slightly younger, and were more likely to be married white males with higher levels of education. They were also more likely to have normal body weight, to engage in aerobic exercise, and to abstain from alcohol and tobacco.

The study is strong evidence that strength training in older adults is beneficial beyond improving muscle strength and physical function.

The study is strong evidence that strength training in older adults is beneficial beyond improving muscle strength and physical function, Kraschnewski says.

“We need to identify more ways that we can help get people engaged in strength training so we can increase the number from just under 10 percent to a much higher percentage of our older adults who are engaged in these activities.”

Other researchers from Penn State and from Columbia University are coauthors of the study.

This article was originally published by Penn State.  Republished via Futurity.org under Creative Commons License 4.0.