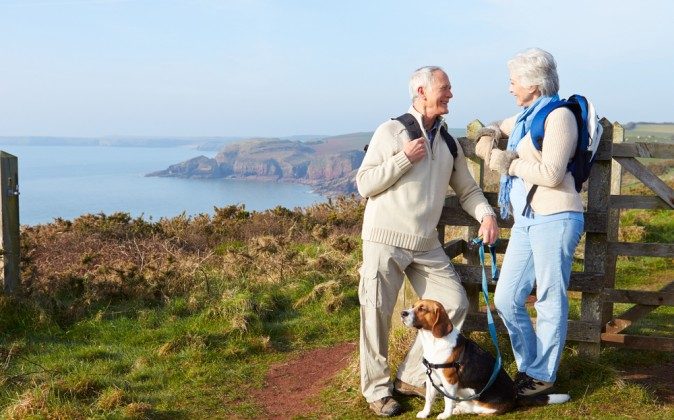 New research offers more evidence that exercise is key to staying mobile as we age, even for frail older adults. In fact, moderate physical activity helped aging adults maintain their ability to walk at a rate 18 percent higher than older adults who did not exercise.

“The very purpose of the study is to provide definitive evidence that physical activity can truly improve the independence of older adults,” says principal investigator Marco Pahor, director of the University of Florida’s Institute on Aging.

What’s more, moderate physical activity not only helped older adults maintain mobility but also helped prevent the occurrence of long-term mobility loss. There was a 28 percent reduction in people permanently losing the ability to walk easily, says coauthor Jack Guralnik, professor of epidemiology and public health at the University of Maryland School of Medicine.

“The fact that we had an even bigger impact on persistent disability is very good,” says Guralnik, who also holds a faculty position at the University of Florida. “It implies that a greater percentage of the adults who had physical activity intervention recovered when they did develop mobility disability.”

From the Parking Lot to the Store

Researchers showed that prescribed daily physical activity can prevent older adults’ loss of mobility, defined in the study as the ability to walk 400 meters, or about a quarter of a mile. Although 400 meters might sound like an arbitrary number, it’s an important figure for older adults, researchers say.

“Four hundred meters is once around the track, or from the parking lot to the store, or two or three blocks around your neighborhood,” Guralnik says. “It’s an important distance in maintaining an independent life.”

The researchers recruited 1,635 sedentary men and women ages 70 to 89 for the study. The participants could walk a quarter mile within 15 minutes but were at risk of losing that ability. Low physical performance can be a predictor of early death and higher hospitalization and institutionalization rates, and patients with low physical performance are not often recruited to large studies.

“These are people who are patients we see every day. This is why this study is so important: It includes a population that is typically understudied,” Pahor says.

Participants were randomly separated into two groups and followed for an average of 2.6 years. The first group of 818 walked 150 minutes per week and did strength, flexibility, and balance training. They were monitored by two visits to field centers per week. The second group of 817 attended health education classes and performed stretching exercises. This phase of the study occurred between February 2010 and December 2013.

Staff members assessed study participants every six months, checking their ability to walk, their body weight, blood pressure and pulse rate, among other measurements. The staff was not told which participants were assigned to physical activity or to the education classes.

The study did turn up one unanticipated result: The number of people reporting hospitalizations in the physical activity group was slightly higher than in the education group, though the number was not statistically significant. The researchers think this is in part because the physical activity group had more frequent contact with research staff, possibly resulting in a higher reporting of hospitalizations. The physical activity could also have triggered underlying heart trouble and other health problems. Researchers plan to study this occurrence more closely, Pahor says.

“It’s quite a vulnerable and high-risk population,” Pahor says. “Both age and poor health were factors. We selected people who had low physical performance, which is a strong predictor for future morbidity, hospitalization, institutionalization, and mortality.”

Which Exercise is Best?

“As an exercise scientist, I believe this type of research is absolutely critical to establish scientific evidence on which to make recommendations for how lifestyle can beneficially influence health status,” says Wendy Kohrt, professor of medicine in the division of geriatric medicine at the University of Colorado, who helped review the scientific merit of the study before the launch of the main LIFE trial.

“There is a general belief among the public and the scientific and medical communities that we know exercise is good for you, so why do we need to do more research in this area? However, we still do not know whether certain types or doses of exercise are better than others, particularly for specific health conditions or diseases. The LIFE trial demonstrated that a modest increase in physical activity has the potential to help older adults maintain functional independence.”

*Image of “senior couple” via Shutterstock