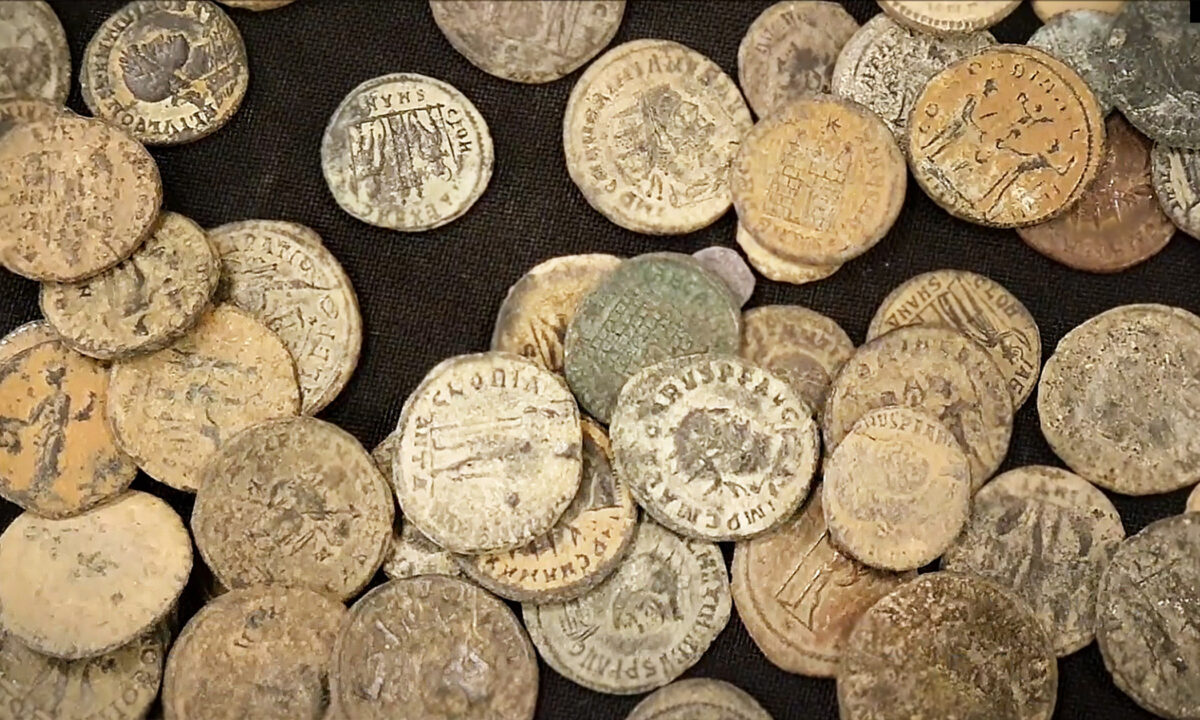 What began as a routine pullover of a suspicious vehicle by police in Jerusalem turned into an archaeological discovery harking back over 1,900 years ago—inside the trunk of the vehicle, Lev HaBira detectives found a box containing ancient “battle spoils” captured from Roman soldiers by Jewish rebels during the Second Jewish Revolt.

Inspectors from the Israel Antiquities Authority Robbery Prevention Unit were called after officers in early December made the startling discovery inside the vehicle, stopped for driving the wrong way on a one-way street in the Musrara neighborhood. Suspecting something was afoot, the detectives initiated a search and uncovered a wealth of ancient artifacts dating back to the Bar Kokhba Revolt, (fought around A.D. 132 to 136).

It was determined that the artifacts were illegally excavated from an ancient rebel tunnel complex once used as a hideout in the Judean foothills, which had been under surveillance in recent months; and that the suspects made their way into Jerusalem with items, intending to sell them, before being apprehended.

Such bronze artifacts are relatively rare finds in Israel, the Authority stated, as metal was (and still is) an expensive commodity that was usually melted down for reuse. “Such finds are generally recovered from archaeological sites where they were deliberately concealed, or in tunnel complexes left after being taken in battle during the Bar Kokhba Revolt,” the statement said.

It’s hypothesized that the objects were spoils seized by Bar Kochba rebels from Roman soldiers during the said Jewish revolt, after the second temple’s destruction. But they would not have been used by the rebels themselves, because the Roman artifacts were decorated with pagan symbols and figures that would violate their prohibition of idolatry. “If the Jewish fighters wanted to use such artifacts, they would deface the figures to prevent idolatry,” the Authority stated.

The ancient bronze censers, used for burning ritual incense, probably belonged to affluent Roman houses or temples, researchers added; depicted on the bronze wine vessel is a Roman banqueting scene with a reclining figure holding a jug of wine.

As for the suspects, the Authority has launched an investigation that they said has “reinforced suspicions that the items were brought to Jerusalem to be sold to an antiquities dealer.”

Meanwhile, director of the Authority’s Robbery Prevention Unit Amir Ganor credits the actions taken by Lev HaBira detectives, stating that their “vigilance led to the finds’ recovery and the success of the investigation, thus thwarting the attempted sale of unique antiquities.”

Director of the Israel Antiquities Authority Eli Eskozido said they are “working day and night to combat illicit excavations at antiquities sites around the country” in cooperation with Israeli law enforcement agencies.

“These ancient finds embody the country’s history, but for robbers and dealers they are merely a commodity, sold to the highest bidder for pure greed,” Eskozido added. “It is tremendously important to prevent any attempts to deal in illegal antiquities, to recover valuable finds and to return them to the public and the State. When legal proceedings against the suspects are complete, the Israel Antiquities Authority will ask the court to confiscate the finds and hand them to us for conservation and further research.”