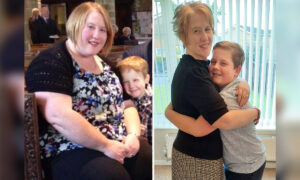 280lb Mom Too Obese for Hugs Slims Down to Size 8 to Cuddle Son: 'He Had Faith in Me'
0
Share Now
TelegramFacebookTweetEmailTellMeWeReddit
Copy Link 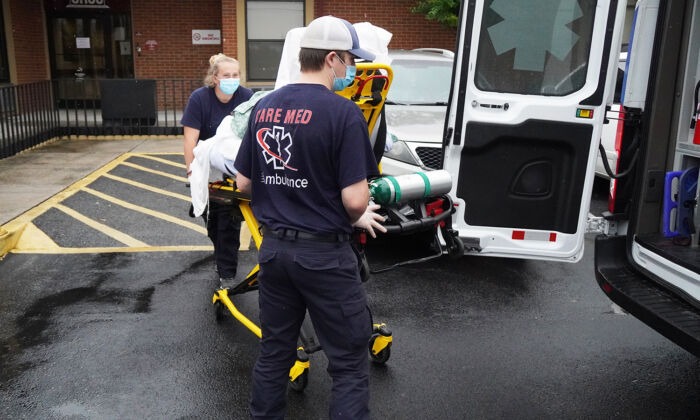 Americans keep getting heavier, but the backs of ambulance workers aren’t getting stronger.

Over the past five decades, the percentage of obese people in the United States rose from about 14 percent to 40 percent. The American Obesity Association estimates that by 2030, 60 percent of the population will be obese.

“It’s definitely a pain in the back,” said David Williams, an emergency medical technician (EMT) with Care Med Ambulance in Chattanooga, Tennessee.

At Care Med Ambulance, nearly 90 percent of ambulance riders are obese, according to Williams. Care Med transports people who can’t drive to medical checkups. It doesn’t respond to emergencies.

“We’ve been having to do a lot more lift assists,” Williams said. “That takes our time in office or another truck’s time when they could be having a break or picking up another patient.”

Before working at Care Med, EMT Candace Laymon worked at the fire department in Mowbray, Tennessee. Most of the calls received by the department during her time there came from people who needed help lifting someone obese off the floor, she said.

The obesity epidemic affects ambulance and emergency services across the country, according to Iowa’s Dysart Ambulance Service Director Jules Scadden.

“This is something that everybody deals with, as long as there’s EMS,” Scadden said. “It would be great if everybody weighed 180 pounds, but even 180 pounds can be wear and tear on the body.”

EMS workers tend to be strong. Most people at Care Med have sturdy builds from lifting people all day. But bodies have their limits, Williams said.

“For most people, about the time you hit the 300-pound mark is where you’re calling another ambulance,” he said. “It takes a toll on our crews.”

Back pain from lifting obese patients is a persistent problem for Care Med’s EMS workers.

“By the end of the day, to end of the week, we’re hurting to the point where we can barely move,” Williams said. “Now our backs hurt constantly, no matter what we’re doing.”

EMS workers know their job involves heavy lifting and that they can’t do it forever, Williams said. Despite low pay and the physical toll, many EMS workers work because they want to help others.

“Care Med is in a pandemic, and they need so much help,” emergency medical responder (EMR) Chloe Gourley said. “I’m already helping as much as I can everywhere else, and here I can help out with driving.”

To carry obese patients, EMS workers use proper lifting techniques, according to Gourley.

“But even with that, if you have 10 obese patients back-to-back-to-back, even with 15-minute breaks, it’s still a workout,” she said.

When she gets home from work, Gourley stretches, takes a warm bath or shower, and applies pain relievers to her back.

“I just go straight to that,” she said.

Even as stretcher technology has advanced, EMS back injuries have increased. At some point, emergency workers must lift the stretcher and the patient on top of it.

“Everybody talks big about power stretchers being helpful. They are, to a certain extent,” Laymon said. “But you’re still having to pick up the entire stretcher and the patient to load it in the back of the truck.”

Care Med EMS workers Ethan Webber and Bailey Thornton typically lift 10 to 12 patients per day. A patient can weigh between 90 and 420 pounds, Webber said. The stretcher weighs about 60 pounds.

After lifting the patient to a stretcher, Webber and Thornton maneuver the stretcher to the ambulance. If they’re lucky, the stretcher will be wheeled on smooth pavement and wide hallways. If not, they wrestle the stretcher across grass, stairs, or narrow doorways.

Next, Webber or Thornton lifts one end of the stretcher while the other end slides on a rail inside the ambulance. At their destination, they repeat the procedure in reverse.

Out of eight people on Webber and Thornton’s Oct. 6 ambulance route, six were obese or overweight.

For the people Webber and Thornton pick up, obesity is often one of many struggles.

Most of the obese people in the ambulance seem in despair. They can’t walk, but they also hardly move their hands. They barely speak and their expressions seem lifeless. They seem ashamed, but, in the narrow ambulance, there’s nowhere to hide. Their limbs look thin and weak.

The science backs him up. Depression and obesity tend to be correlated.

Webber said that family background and individual responsibility are part of why people are obese, but that culture plays a huge role as well. When people get injured in ways that leave them bedridden, they also have little to do but eat.

“It’s probably more of a culture thing than anything. Americans eat fast food every day. I know a lot of people who will order pizza or takeout in hospital or eat and ask for a sack lunch. I don’t know if I’ll be any different at 70.”

Between jobs, Webber and Thornton keep their spirits up with a lively sense of humor. They don’t usually talk about the patients that they transport.

“We played the Bee Gees’ ‘Staying Alive’ downtown with the windows down once,” Webber said. “People looked at us funny.”

Outside of the ambulance, the morbidly obese often live lonely lives. They can’t walk to see other people. They often don’t want to, according to Anita Bivens, a 49-year-old obese woman in recovery.

Unlike most of the other obese people Care Med carries, Bivens is working to get healthier. Not long ago, she weighed 500 pounds, she said. Today she’s down to 250.

“When I was 500 pounds, my self-esteem was so low I didn’t want to leave my house,” she said. “My husband said I quit caring about me. I was just sitting there drinking drinks and eating food.”

Bivens’ obesity led to disastrous health issues. Her kidney stopped working, and she almost died in the hospital. Health workers successfully resuscitated her.

But her troubles got worse when she went home. With two EMTs supporting her as she walked up the stairs, Bivens fell.

“My legs came out from under me. I broke my legs. I got fake knees, crushed legs, all that. My bones were crushed so bad the doctor had to figure out a different route for pins and screws. I couldn’t go home for nine months.”

Bivens chose to lose weight for her daughter Ariyha, her son Antonio, her husband Carlos, and her mother Charlotte. She has their names tattooed on her arms.

Right now, Bivens said she just wants to be home. But to get there, she has to become strong enough to do activities that most people take for granted. She said she needs to be able to take care of basic needs by herself, such as going to the restroom.

“That definitely should be a strong signal that there’s something wrong with our health care system, that we are not able to help people with obesity,” he said.

“They’ve got to figure out how to serve everybody that’s out there,” he said.

Many ambulance companies already buy specially designed stretchers for the morbidly obese. A “bariatric stretcher” is nearly twice as wide as a normal one. It weighs 150 pounds compared to a normal stretcher’s 70 pounds, Williams said.

“If you’ve got the wider stretcher and a wide patient, it makes things very tight,” Laymon said.

“I’ve picked up a patient on the bariatric stretcher where she was overflowing it,” Williams said. “We could not get straps around her. She was 800 pounds.”

When EMS workers lift an 800-pound person, it takes four people, and everyone still struggles, he said.

Even with powered self-lifting stretchers, EMS workers must put the patient on the stretcher, then put the stretcher in the ambulance. Powered stretchers are heavy and most only have enough battery power to lift one obese patient.

For small volunteer ambulance services such as Dysart Ambulance Service, buying these devices can be challenging, Scadden said.

She has already purchased $7,000 “stair chairs” and a $32,000 stretcher to carry the obese. To avoid raising ambulance prices, she held a fundraiser.

To lift obese people, ambulances sometimes have to call another ambulance for extra manpower. But this strategy leads to fewer ambulances being available, Scadden said.

“If we have to call other volunteers that are available to come help lift, then if we get a call, we don’t have the additional ability or resources to respond to that call,” she said.

Unlike ambulances, helicopters have a weight limit and sometimes can’t carry obese patients to hospitals.

“The back saver is a solution which really takes away the lifting and that lateral motion, and instead raises up a normal gurney by one foot,” Johnston said.

The gurney attachment is too large to fit into a helicopter, but once a patient arrives at a hospital, workers can slide their stretcher onto a wheeled gurney without lifting, according to Johnston. This new system costs $18,000, he said.

However, the system won’t be able to help helicopter EMS workers lift someone in the field. Sales said he once flew a 600-pound patient who required six people to lift into the helicopter.

“There still is that problem in the field, but this invention is really meant [for the] problem at the hospital,” Johnston said.