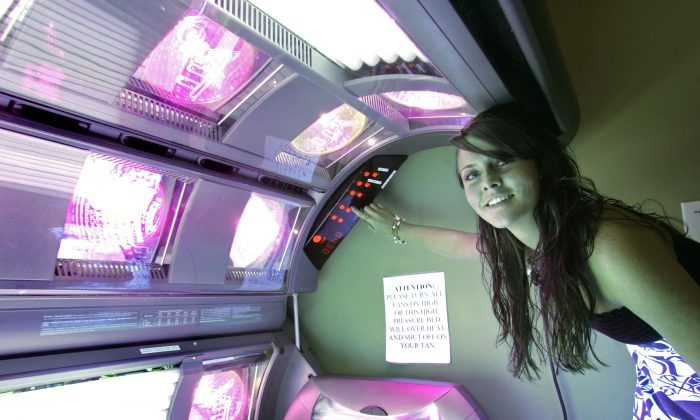 Rosie McDavid, 17, who has been using tanning beds since she was 14, prepares a tanning bed for a session, in Tallahassee, Fla., March 25, 2009. After New York State has banned tanning for those under 17 since July 2012, New York City is currently planning to take over regulation from the state health department. (Phil Coale/AP)
Health

City to Take Over Regulation of Tanning Salons

NEW YORK—The city is planning to take over the regulation of tanning salons from the state health department, but salon owners expect few changes. They say current regulation by the state is sufficient.

Under Bloomberg, the city has increased regulatory oversight of a number of public health issues, such as smoking, the size of sugary drinks, and listing calorie content at fast food restaurants. Better regulation of tanning salons may mitigate the risk of cancer from exposure to ultraviolet (UV) rays used in tanning beds.

The proposal includes public education, inspecting tanning beds, and training for staff, according to the New York Post.

“We don’t see any big change,” said Jan Meshon, owner of City Sun Tanning. “We are prepared for [the inspectors].”

“Responsible operators don’t have a problem with reasonable inspections,” Meshon said, adding that his staff are already professionally trained.

The new Department of Health and Mental Hygiene (DOH) regulations will be based on existing state law.

“The purpose of the proposed rules is to assume regulatory oversight authority from the NYS Department of Health,” according to the city’s regulatory agenda for fiscal year 2014.

The proposed regulations will be sent to the Board of Health, mayor-appointed medical experts who oversee the city’s health code, on Oct. 15.

The city also wants the DOH to crack down on the unlicensed use of UV equipment and enforce the state ban on use of tanning beds by those under 17.

Under the proposal, the health department would launch a campaign to increase awareness among teenagers about the dangers of over-exposure to UV.

“There is no doubt that tanning increases the risk of skin cancer. Skin cancer is the most common form of cancer,” said Daniel Kass, the city’s deputy health commissioner for environmental health, to the New York Post. “We want to make sure kids are not using these salons.”

The proposal calls for salons to be inspected every two years.

According to James Oliver, CEO of tanning salon Beach Bum, salons are already inspected once a year by the state. “I am a little confused by this,” said Oliver. “Are they planning to relax inspections?”

Officials told the New York Post that the city health department has more resources to keep tabs on salons than the state health agency.

After review and public hearings the Board of Health is expected to adopt the new rules in the spring of 2014 for oversight of tanning salons.