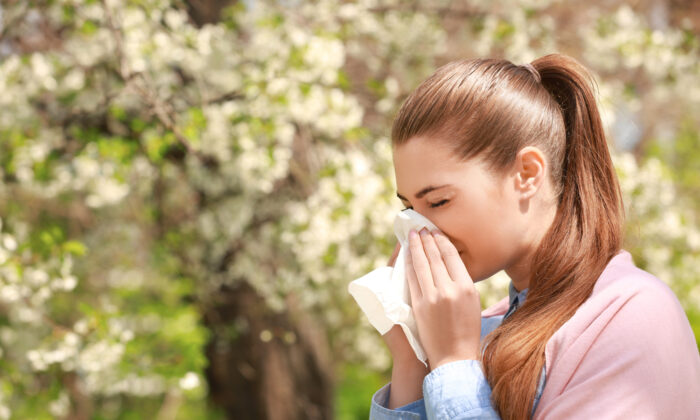 With allergy season upon us, understanding what is happening might be very helpful at helping us control our allergies. (Shutterstock)
Health News

A peer-reviewed study by the University of Vienna has demonstrated that allergic symptoms such as hay fever can be reduced by fulfilling micronutrient requirements to pacify a hyperactive immune system.

Women who had hay fever from birch and grass pollen, had their allergic responses reduced by 43 percent after continuous intake of lozenges that contained supplements for iron, polyphenols, zinc, and vitamin A for 6 months.

“Elevated immune activity, which is intrinsic to allergic individuals, always results to a certain degree in functional iron deficiency,” the authors wrote.

Allergic responses are caused by the overactive immune response against a foreign substance that does not cause disease, causing inflammation and leading to allergic symptoms.

The study, published in the Journal of Allergy and Clinical Immunology, suggested that meeting iron intake requirements can reduce the symptoms as the presence of iron is very important for the growth and maturation of immune cells, as “immune activation always leads to different degrees of functional iron deficiency.”

Allergic individuals with an active immune system are often stuck in a “vicious cycle” where they must use various methods such as taking supplements to compensate for the loss of iron from their bodies, “otherwise, the immune system remains hyperactivated.”

Previous studies have also indicated that micronutrition deficiencies of iron, vitamin A, D, and E were related to an increased tendency for developing allergic diseases as the immune system would be overreactive.

The researchers therefore aimed to resolve these deficiencies to see if there would be any benefits to the symptoms.

As part of the study, 58 women with hay fever reactions to birch or grass pollen were recruited, with 28 women taking lozenges and 31 in the control group taking placebos.

At the start of the study, participants were nasally provoked by exposing them intentionally to birch and grass pollen, with their allergic reactions such as mucus secretions, sneezes, and or presence of any itching noted and measured with a number scored for the level of their allergic response.

This score would be measured again 6 months after the study, with the participants exposed to the same nasal provocation again across both the control and the lozenge group.

The researchers noted that nasal mucus discharge decreased for both the control and lozenge groups, however, women who took lozenges saw a greater improvement in symptoms by an average of around 43 percent in scoring as compared to the placebo group, which only saw a 13 percent improvement.

The researchers wrote that their novel approach of using lozenge supplements shows that allergies “may be ameliorated by targeting micronutrition.”