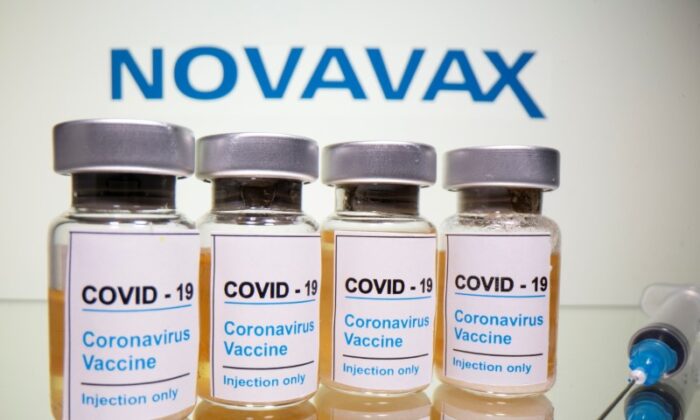 Vials with a sticker reading, "COVID-19 / Coronavirus vaccine / Injection only" and a medical syringe are seen in front of a displayed Novavax logo in this illustration taken Oct. 31, 2020. (Dado Ruvic/Illustration/Reuters)
Vaccines & Safety

Novavax COVID-19 Vaccine May Be Issued Emergency Use Authorization in June: FDA

The U.S. Food and Drug Administration (FDA) announced Friday that it will have its advisory panel meet to discuss Novavax’s request for emergency use authorization (EUA) of its COVID-19 vaccine in June.

“On June 7, FDA intends to convene VRBPAC [Vaccines and Related Biological Products Advisory Committee] to discuss an EUA request for a COVID-19 vaccine manufactured by Novavax to prevent COVID-19 in individuals 18 years of age and older,” the federal regulatory agency said in a press release.

Novavax, a biotechnology company based in Maryland, submitted an EUA for its COVID-19 vaccine known as NVX-CoV2373 on Jan. 31, 2022.

Despite Novavax being awarded $1.6 billion by the United States government in July 2020 to support the testing, commercialization, and manufacture of a possible COVID-19 vaccine in the United States the federal health authorities have been slow to authorize its vaccine.

The Novavax COVID-19 shot differs from the mRNA and viral-vector COVID-19 vaccines currently available in America, in that it uses a protein-based technology, which has been used for decades to protect individuals from diseases like shingles and hepatitis.

The Novavax vaccine delivers proteins, coupled with immunity-stimulating adjuvants, directly to a person’s cells, rather than an mRNA or DNA, in order to induce a protective immune response.

In its phase 3 trial of nearly 30,000 adults in the United States and Mexico, researchers found that the vaccine was 90.4 percent effective against the CCP (Chinese Communist Party) virus, which causes COVID-19.

The researchers also said that “no episodes of anaphylaxis, no evidence of vaccine-associated enhanced COVID-19, and no events that triggered prespecified pause rules were observed. No episodes of the Guillain–Barré syndrome and no imbalance in myocarditis or pericarditis or in vaccine-induced immune thrombosis with thrombocytopenia were observed during the relatively short safety follow-up period reported here.”

Australia’s Therapeutic Goods Administration (TGA), which is equivalent to the FDA, said it had received 78 reports of suspected adverse reactions to the Novavax vaccine as of March 6, 2022. That number increased to 424 by April 3, with 97,800 doses administered. The regulatory agency approved the Novavax COVID-19 vaccine for emergency use in the country in January 2022.

“The most commonly reported reactions include headache, paraesthesia, fatigue and dizziness,” the TGA said in its weekly safety report, adding that “no safety signals have been identified” due to the limited reports submitted.

Only 41 countries have approved the use of the Novavax COVID-19 vaccine as of April 29. Whereas, the Pfizer mRNA vaccine is administered in 144 countries and the AstraZeneca vaccine in 138 countries, according to the World Health Organization.