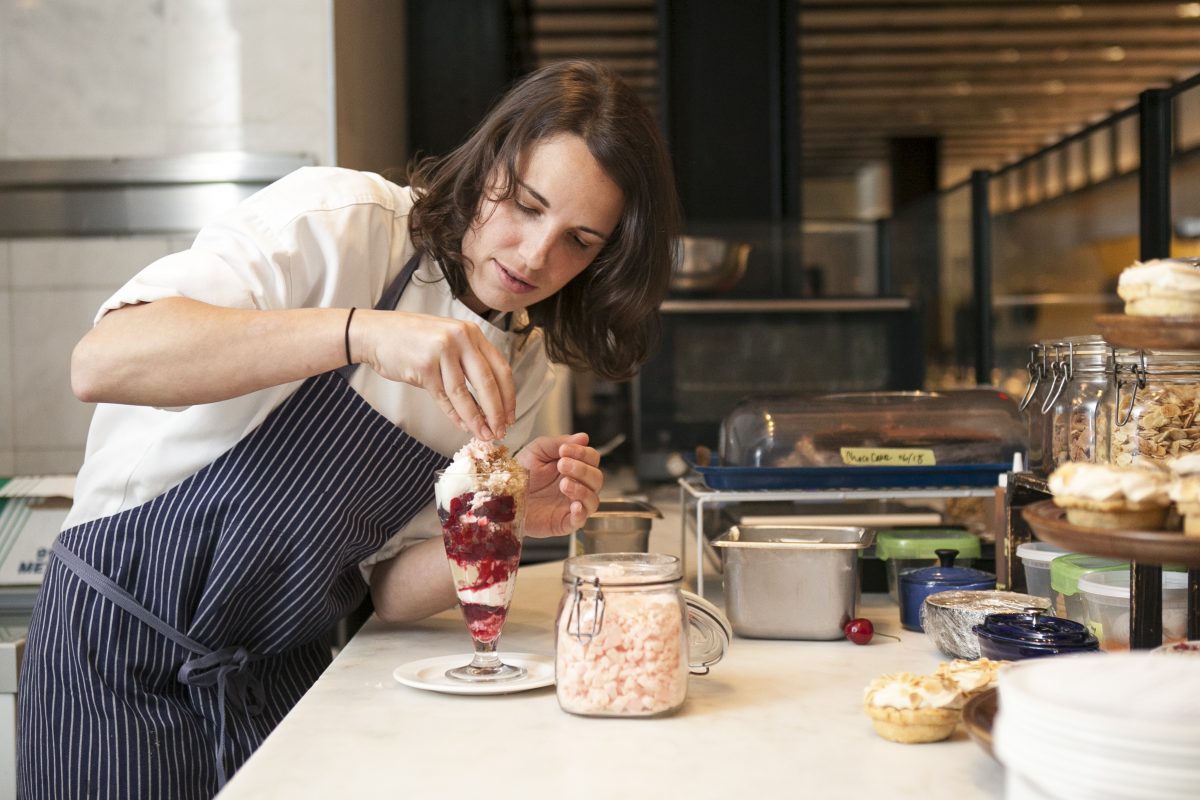 Most chefs specialize in a particular cuisine. Tracy Obolsky specializes in the nostalgic: creamsicle pies, milk chocolate malted cakes, cherry cola sundaes—such stuff that memories are made of.

It’s impossible to eat her desserts without a smile on my face.

The 32-year-old pastry chef of downtown’s North End Grill, and Esca alum, gets inspiration from her grandmother’s recipes. “It reminds me of my mom making that and me eating it. I never thought I’d be the one making them.”

She also always had a sweet tooth. “I had tons of cavities when I was younger,” she said.

As a teenager, Obolsky’s first job was working at Carvel Ice Cream. “At the end of the night, I’d be—ice cream in my hair— putting the machine back together, saying, ‘I’ll never need to know this. This is such a waste.’ Here I am 15 years later doing the exact same thing but really embracing it,” she said.

That’s putting it mildly. Obolsky is known for her ice cream. It started when she was making ice cream at a cart outside General Greene. Her dog Penny, who she had dressed in a baby shirt, would accompany her and eat ice cream. (Don’t ask about how that ended up. Penny has happily moved on from ice cream to wellness dog treats—and the occasional Heineken.)

She has a reputation for being able to turn anything into ice cream, from popcorn to sticky buns.

But it’s not as simple as taking vanilla ice cream and throwing in chunks of ingredients—something she finds gimmicky—but rather treating the base as its own flavor, she explained.

For example, her popcorn sundae, which feature layers upon layers of textures from salted butterscotch candy popcorn and popcorn financiers, uses a popcorn ice cream base. That alone takes a three-day process, including popping fresh popcorn, soaking it in milk overnight, and pureeing it, adding cream, sugar, salt, cooking it with egg yolks, and straining it out.

She also eschews the use of stabilizers, which ice cream makers often resort to as a way to keep the ice cream smooth and creamy. Some stabilizers are artificial and some are natural. But, in her view, “it’s like an athlete taking steroids, it’s kind of like cheating. I think you’re robbing yourself of really learning to do it the correct way, and not challenging yourself to say, ‘No, I’m not going to do this without using any strange products.'”

Since she has started at North End Grill, Obolsky has been making use of a range of appliances, from the wood-fired grill to the cold smoker.

Obolsky made smoked desserts at Esca, but they are much better for the North End Grill than the Italian fish restaurant, she said.

“I have to be careful because I want to throw everything on the smoker. A lot of things I think would be great smoked but the average diner would think it was strange,” she said. Usually there are two smoked items on the menu.

Smoking adds a surprise element and fun, she said. “It makes people think of bacon. They’ll say, ‘Is there bacon in this?’ because that’s what they associate the smoked flavor with, and they haven’t had too many other things that are smoky.”

Obolsky was spot on. I enjoyed her crisp tremendously, and thought there was a hint of bacon or smoked meat somewhere—because those are the items I had that were smoked. Of course, those who believe bacon makes everything better will be happy to hear this.

But the smokiness is really from the gentle applewood smoke.

The smoking—the fun and surprise—seems a natural pick for Obolsky who is cheerful, plenty energetic (“an adrenaline junkie” as well), and with some spontaneity to spare (example: eloping to get married by Elvis in Las Vegas, eight years ago).

Like a creative type—Obolsky also went to Pratt to study art before becoming a pastry chef—she is wont to be hit by inspiration anytime, anyplace.

It is probably the only time the kitchen staff has seen a chef go through bottles of cherry cola. Currently on the menu, the cherry cola sundae features a cherry cola base, and layers of cherry compote, and fizzy cherry candy.

Unlike other desserts that make use of pop rocks to create a fireworks-going-off effect in your mouth, the fizzy cherry candy is gentler, just like sweet memories of the past.

Method:
First make the oat crumble topping. Mix all of the dry ingredients together in a bowl. Add the melted butter and vanilla extract and mix by hand until small crumbles form. Spread the crumble topping onto a sheet pan and put in the refrigerator to chill.
For the filling, mix all of the ingredients together. Divide the filling between four ovenproof small bowls or ramekins or in one large 8×8 baking dish.
Sprinkle the oat crumble over the top of the filling to cover.
Bake at 325F for 25–30 minutes until the filling bubbles. Serve warm with vanilla ice cream.