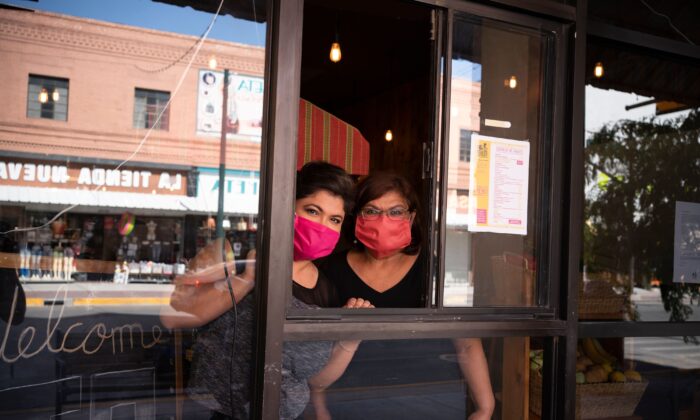 Vanessa Zubia-Meza and her mother Margie Zubia are pictured in the window of their new restaurant called El Paseo in downtown El Paso, Texas on May 18, 2020. (Paul Ratje/AFP via Getty Images)
AMERICA

After two weeks of lifting its mask mandate and allowing businesses to open at full capacity, Texas is not seeing a surge of new COVID-19 cases.

Gov. Greg Abbott, a Republican, issued an executive order (pdf) that went into effect on March 10 to loosen COVID-19 restrictions. Although the government’s statewide mask mandate was lifted, individual businesses were still able to “limit capacity” or impose mask mandates at their own choosing.

But in Austin and Travis County, residents 10 years or older still have to wear a mask outside their home after a district judge refused to grant Attorney General Ken Paxton a restraining order that would have ended a mask mandate enforced by Travis County and Austin city officials. The trial is set to take place on March 26.

Texas had been witnessing a downward trend in COVID-19 cases and hospitalizations prior to Abbott’s announcement ending the restrictions.

The Texas Department of State Health Services (DSHS) posted on Twitter yesterday that Texas saw a seven-day average decrease in the daily number of new cases, hospitalizations, and deaths.

#COVID19TX Update: Texans are slowing the spread with vaccines and #HealthyTexas steps. Keep it up to stop variants from reversing our progress.

At the time the executive order was issued, March 2, new COVID-19 cases in the state stood at 7,240 cases, with a seven-day average of 7,259 cases. That number dropped to 5,350 cases by March 10 when the executive order came into effect and the economy fully opened.

Abbott included in his order a provision for county judges across the state’s 22 hospital regions to “use COVID-19 mitigation strategies” if hospitalizations rise over 15 percent of “hospital bed capacity” for seven straight days.

“County Judges may not impose jail time for not following COVID-19 orders nor may any penalties be imposed for failing to wear a face mask. If restrictions are imposed at a county level, those restrictions may not include reducing capacity to less than 50% for any type of entity,” he added.

“We understand people’s need to get back to normal, and we’re going in that direction. But when you start doing things like completely putting aside all public health measures as if you’re turning a light switch off, that’s quite risky,” Fauci said during an appearance on CNN earlier this month. “We don’t want to see another surge, and that’s inviting one when you do that.”

“Starting tomorrow, we are lifting all of our county mask mandates and businesses will be able to operate at full capacity without any state-imposed rules,” Republican Gov. Tate Reeves said on Twitter. “Our hospitalizations and case numbers have plummeted, and the vaccine is being rapidly distributed. It is the time!”

In Mississippi, new COVID-19 cases have also been steadily declining but not as much as in Texas.

The state’s death toll is significantly lower than Texas, with four deaths on March 24 and a seven-day average of 6 deaths.

At the time of publishing, more than six million Texan residents and 720,607 Mississippians have received at least one dose of the COVID-19 vaccine.