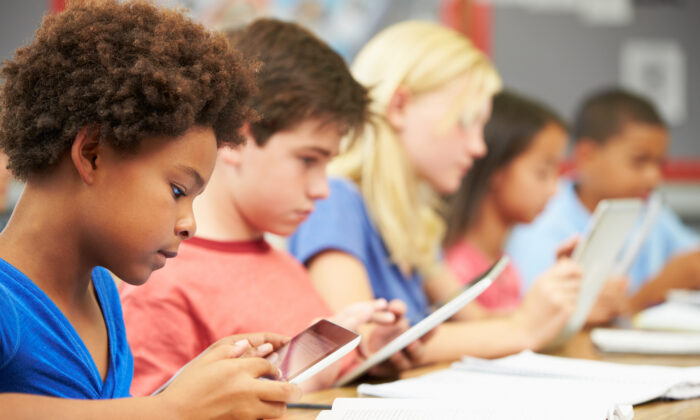 In public schools, older methods of learning, such as memorization, have been abandoned long ago. (Monkey Business Images/Shutterstock)
Family & Home

No More Excuses: Tackling Our Failures in Education

While I read his online article “K-12: The Life and Death of the Mind,” Bruce Price pointed me to a video titled “Americans testing their knowledge.” For 25 minutes, we watch as young people are baffled by questions such as: “If you’re driving 70 miles an hour, how long will it take you to go 70 miles?” “Can you name the seven continents?” “What year was America founded?” and “Which is heavier, a pound of rocks or a pound of feathers?” Others are asked to solve simple multiplication problems and haven’t a clue as to how to do so.

While the ignorance of these young men and women is appalling, we shouldn’t blame them. They seem likable and intelligent, but they are a product of what we might at this point euphemistically call our “education system.”

That it is possible to spend 13 years in a classroom and graduate so horribly uneducated should shock all of us. Our schools have cheated these students. They have wasted years of their lives sitting at a desk and closing out their high school years unable to identify in which war was fought the Battle of Gettysburg or which planet is closest to Earth.

So how can we change direction and offer students a real education?

The Duty of the Parent

First, we must stop hoping for some enormous turnabout in our public schools, at least for the present. Old ideas about education—memorization, for instance, of basic math facts and dates from history, or learning how to write essays—have long ago gone out the window. Parents relying on a school as a guarantee their children are receiving a quality or even an adequate education may be sorely disappointed.

Parents who have enrolled their children in charter schools or private academies must also keep a watchful eye over what their child is learning. When sixth grade rolls around and Johnny still can’t recite his multiplication tables, something is amiss.

In short, the final responsibility for a child’s education belongs to the parents. With more and more evidence of failing schools—writers such as Richard Mitchell, E.D. Hirsch, and John Taylor Gatto were addressing this problem more than 25 years ago—parents must stand in the gap and oversee their children’s learning.

Whatever your circumstances, here are some practical tips to help your child learn in the home.

First, take the Mama Carson approach to education. When she became aware of her son Ben’s poor academic performance, she put him and his brother on a daily reading schedule, limiting their hours in front of a television and their outdoor playtime. She also had her sons write book reports on their reading, delivered not to a teacher at school but to her.

As Candace Owens tells us in “Blackout: How Black America Can Make Its Second Escape From the Democrat Plantation,” Ben’s mother was born into extreme poverty, married at age 13, had only a third-grade education, and often suffered from depression while single-handedly raising her two sons.

Ben Carson graduated third in his class in high school, earned an undergraduate degree from Yale, attended medical school at the University of Michigan, and became a gifted pediatric neurosurgeon. Today he is our nation’s Secretary of Housing and Urban Development.

In her interview with Ben Carson, Owens reports that he believed his mother’s refusal to accept excuses for poor performance was what led to his success. When he or his brother came up with such excuses, she always said, “Do you have a brain?’” She meant her sons should be able to think their way out of any problem and take full responsibility for their actions.

Like Mama Carson, parents need to stress academic learning in the home. We often expect too little of our children in this area, with the result that many of them come nowhere near their capability for learning. Too much screen time and social media account for some of this deficiency, but so too does an overabundance of extracurricular activities. Piano lessons, dance, and soccer may fill up 13-year-old Mary’s afternoons, but what are Mom and Dad doing to fill up her mind?

Next, consider purchasing the Core Knowledge Series that begins with “What Your Preschooler Needs to Know,” an eight-volume set that runs through the sixth grade. Here you’ll find everything from history and biography to science, from fairy tales and nursery rhymes to poems and folk tales for more advanced students.

E.D. Hirsch, Jr. who put together this series, also created the Core Knowledge Foundation—not to be confused with Common Core—which offers all sorts of curricula and programs, many of them free of charge. Hirsch’s Core Knowledge concept offers the perfect antidote to the lack of knowledge displayed in “Americans testing their knowledge.” Having understood that a shared culture is one of the bonds of a well-ordered society, Hirsch gives parents and teachers a core curriculum of the basics all Americans should know.

Mother and daughter team Jessie Wise and Susan Wise Bauer’s “The Well-Trained Mind” is another excellent resource. Covering K-12, the book contains hundreds of resources, teaching tips on subjects as diverse as biology to logic, and lots of encouragement from these two veteran teachers.

4-H clubs offer all sorts of programs for students, ranging from agriculture to computers and electronics. Though once associated with rural communities, 4-H can now be found in towns and cities across the nation. Consider checking out this amazing resource. Several families I’ve known highly praise 4-H for the many gifts it has given to their children.

Finally, if your children’s school doesn’t offer much in the way of clubs devoted to academics and learning, consider starting one yourself. If Jeremy shows an interest in computer programming, get him together once a week with like-minded friends and see if some adult with more expertise than you possess would mentor the group. If Nora loves poetry and plays, assemble some of her friends, serve up some refreshments, and help guide them through “Twelfth Night” or the work of Christina Rossetti.

Of Ben Carson’s triumph over obstacles, Owens writes: “In considering Carson’s story, I can’t help but wonder, what if? What if the black community as a whole made the decision to let go of every excuse that we perceive to be holding us back? What if we taught ourselves to see only opportunity rather than opposition?”

Those words are true for all of us.

What would all of America look like if we put aside excuses, quit relying so heavily on a failed system of education, and gave our children not only the knowledge they deserve, but also the wisdom to see that hard work and determination will put them in charge of their future?

Now these are some life-long virtues worth passing along to our children.