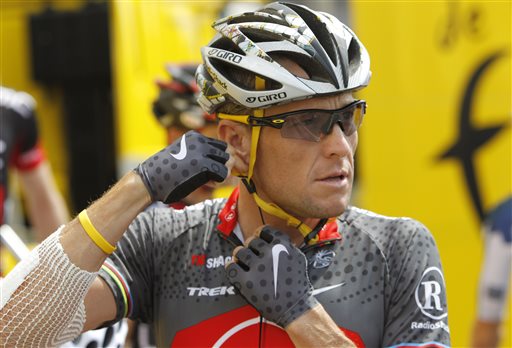 In this July 6, 2010 file photo, Lance Armstrong of the United States, arrives prior to the start of the third stage of the Tour de France cycling race in Wanze, Belgium. Nike Inc. is cutting ties with the Livestrong cancer charity. The move by the sports company ends a nine-year relationship that helped the foundation raise more than $100 million and made the charity's signature yellow wristband an international symbol for cancer survivors. (AP Photo/Christophe Ena, FIle)
Health

Nike, Livestrong split: The clothing and shoe company is ending its business connection with Livestrong, the global cancer-fighting charity, after 9 years.

The foundation is best known for its founder, Lance Armstrong, who started it to fight cancer.

Livestrong in a statement said it is “deeply grateful to Nike not only for the time and resources it invested in helping us improve the lives of people affected by cancer today, but also the creative drive it brought to our nine-year partnership.”

” While the foundation created and owns the Livestrong brand, Nike shone a spotlight on the spirit of courage and resilience it represents,” it continued. “Since 2004, Nike helped raise more than $100 million to advance the Foundation’s mission. Together, we created new, revolutionary ways of thinking about how non-profits fuel their mission and we’re proud of that.”

Nike said Tuesday it will stop making its Livestrong line of apparel after the 2013 holiday season. Foundation and company officials said Nike will honor the financial terms of its contract until it expires in 2014.

The relationship between the two companies reportedly soured with revelations of performance-enhancing drug use by Armstrong and members of his U.S. Postal Service team.

Nike dropped its personal sponsorship of Armstrong last October after U.S. Anti-Doping Agency exposed the team doping program and portrayed Armstrong as its ringleader. And after years of denials, Armstrong admitted earlier this year he used performance-enhancing drugs to win the Tour de France seven times.

A Nike spokesman did not immediately return a telephone message seeking comment.

Armstrong declined comment, noting he no longer has a relationship with Livestrong or Nike.

“Because of our sound fiscal health, the Foundation is well-positioned to continue to grow our free services for cancer patients and survivors that improve quality of life and access to care,” officials said in a statement. “Because of our excellent governance and quality of service, the Foundation remains one of the most highly-rated and effective non-profits in the United States. Because 14 million Americans face the daily challenges of living with cancer, our mission has never been more critical and for some, it will mean the difference between life and death.”