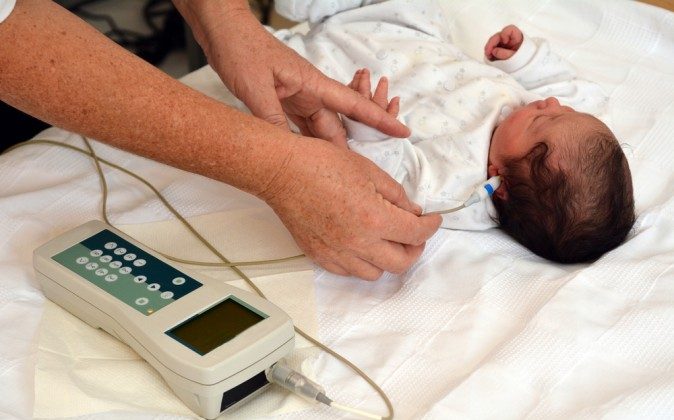 Between one and three of every 1,000 newborns will have a significant, permanent hearing loss. These babies have a six-month window of opportunity for treatment that will allow them to retain their developmental trajectory, so early screening is vital.

Children with a hearing loss born to hearing parents find it much harder to contribute to society if treatment is delayed, showing lower levels of educational attainment, language development, psychological well-being and employment prospects.

Babies start learning to talk as soon as they’re born, if not before, by listening to parents and other family members and imitating speech sounds from an early age. Those born with a hearing loss require intervention by six months of age, usually in the form of hearing aids or cochlear implants, to avoid these significant effects on their language and developmental outcomes.

Without adequate auditory stimulation during this period, areas of the brain originally designated for hearing begin to be assigned to other neural or sensory functions.

The Whys and Hows

Parental concern is one of the primary red flags for childhood hearing loss and should (and hopefully is) always taken seriously by doctors.

But, hearing loss can often go unnoticed during early life because it lies on a spectrum of impairment, with what is commonly known as deafness actually being quite rare.

People often confuse hearing loss with total deafness; in reality most children can still hear some sounds (such as a slamming door) and can seem like any other baby. So, by the time parents realise there may be a problem, their child may already be missing out on the finer details of spoken language that are key for development.

That’s why we now have universal newborn hearing screening in most developed countries. Under the program, all parents should now be offered a hearing screen before they leave hospital, or when they have the first follow-up appointment after the birth of their baby.

The aim of screening is to pick up all kids born with hearing loss, have a confirmed diagnosis within three months and intervention started before the critical six-month point.

Newborn hearing screening usually takes place in maternity wards while the baby is settled or asleep. One of two tests is used; both play a series of low-volume clicks into each ear and record the functioning of the cochlear or the auditory nerve to indicate if they’re working as they should.

Both tests are automated, quick (usually between two and five minutes), and painless; a result of “pass” or “refer” is instantly available to parents. A referral doesn’t necessarily mean the child has failed the screening test.

There are a number of reasons, aside from hearing loss, why a baby might get a “refer”. A relatively common cause is birth fluid still in the ears, but whatever the reason, an appointment for further testing will be needed for a definitive diagnosis.

Screening aims to pick up all kids born with hearing loss, have a confirmed diagnosis within three months and intervention started before the critical six-month point.(Shutterstock*)

Feedback from parents on newborn hearing screening programs has been positive with less than 1% of Australian parents reporting worry or anxiety after the test. The main cause of anxiety, of course, is receiving a “refer” result for a full diagnostic hearing assessment.

For most parents, this anxiety will be resolved once a definitive decision on their child’s hearing can be made. But if hearing loss is confirmed, it can lead to complex emotions and coping mechanisms that will be different for each parent.

Identifying hearing loss as soon as possible after birth also allows parents to make decisions about their child’s future, whether their preferred method of communication is sign language, spoken language or a mixture of the two.

For those who wish to pursue spoken language, early detection and intervention is necessary to provide access to sounds so the sensitive period of auditory development is adequately utilised.

Over 90% of children with hearing loss will be born to hearing parents. Many of these parents choose to pursue spoken language or a mixture of spoken and sign languages.

Deaf parents of children born with profound hearing loss may decide to focus on signed language or may choose a mixture of spoken and signed languages. Every family should be able to pursue the approach that is right for them.

Prior to universal screening, many countries used targeted screening programs, where only children considered “at risk” were screened. This approach yielded very poor results, with some studies showing up to 60% of children were missed.

One of the biggest challenges for newborn hearing screening is getting follow-up diagnostic and intervention services to children in remote parts of the country who have not passed the screen.

In urban areas, approximately 10% of parents don’t attend their follow-up diagnostic appointments. They never learn whether the child has a hearing loss and may miss the critical six-moth window for effective intervention.

There’s limited data regarding the number of children lost to follow-up in rural and remote areas, but it’s thought to be as high as 50% due to limited access to services and the large distances parents must travel for appointments.

Equitable access is a key goal for every public health program. There is a groundswell of activity to trial telehealth diagnosis and follow-up as part of a newborn hearing screening programs which could greatly improve access and outcomes for children and parents in rural and remote areas.

For most parents, newborn hearing screening is a blip on the radar among all the other tests their baby receives in the first few months of life. For some, it’s a nuisance but for a few, it’s an essential step in getting timely access to treatment that will give their child the best start to life.

Dr Dunay Taljaard, Head of Audiology at Princess Margaret Hospital for Children, contributed to this article. Chris Brennan-Jones receives funding from the Cochlear Foundation, the Lions Hearing Foundation (WA) and has previously received funding from the Medical Research Council (UK) and Action on Hearing Loss. This article was originally published on The Conversation. Read the original article.

*Images of “babies” via ChameleonsEye / Shutterstock.com