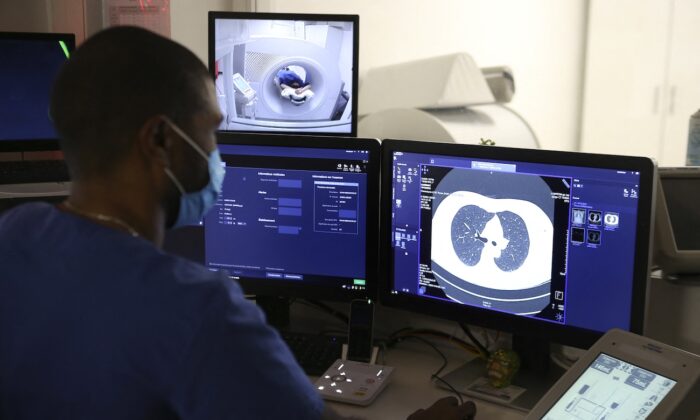 A radiology technician looks at a lung scan in Corsica, France, on Dec. 16, 2021. (Pascal Pochard-Casabianca/AFP via Getty Images)
Cancer

New Treatment May Help Cancer Patients Who Are Resistant to Immunotherapy: Study

A new treatment may bring back hope for cancer patients who had become resistant to immunotherapy, a new study from the United Kingdom suggests.

Immunotherapy is a mode of cancer treatment that aims to boost the body’s own immune system to target and kill cancer cells and is employed when other options such as surgery, radiotherapy, or chemotherapy, have failed.

But some patients have cancerous tumors that progress and become resistant to immunotherapy.

“Immunotherapy has shown amazing promise in cancer care over the last decade, but it doesn’t work well in all cancers and cancers can often become resistant. This combination might be a way to target their cancer even after it has stopped responding to immunotherapy,” Anna Minchom, who is the lead study author and a clinical scientist at the ICR and a consultant medical oncologist at The Royal Marsden, said in a statement.

A total of 34 cancer patients with advanced solid tumors that included those with lung, breast, and prostate cancer, were enrolled in the study between January 2017 and January 2020. They were given a combination of pembrolizumab and guadecitabine in the study.

The study found that this combination had tolerable side effects and had some anticancer activity, and appeared to reverse some resistance to a form of immunotherapy that the patients may have had.

The study is published in the Journal for Immunotherapy of Cancer.

Pembrolizumab has been found useful to treat a range of solid cancerous tumors, including non small cell lung cancer (NSCLC), melanoma skin cancer, bladder cancer, and Hodgkin lymphoma. But some cancer tumors can develop resistance to the drug, meaning the tumor will progress in patients who initially benefited from the drug.

Researchers in the study hypothesized that guadecitabine “will overcome pembrolizumab resistance.”

The participants in the study received guadecitabine daily on days one to four every three weeks, and were administered pembrolizumab 200 mg on day one every three weeks. Of the total 37 people, 30 had their cancer analyzed for antitumor activity.

Researchers found that 11 patients—or 37 percent of the 30 patients—had their cancer under control for 24 weeks or more. This is termed “disease control,” or “progression-free survival.” Researchers noted that this was a population “where 82 [percent] of patients had had [two or more] lines of prior therapy.”

This suggests that the cancer was being made sensitive to the treatment and that the immune system was effectively acting on the cancer tumors of these 11 people, which included people who had NSCLC who had previously progressed on pembrolizumab.

Researchers reported that 18 patients—or 60 percent of the 30 patients—had previously received immune checkpoint inhibitor therapy, 14 of whom had had their cancer progress after treatment.

Seven people—or 39 percent of the 18 patients—had their cancer controlled after 24 weeks or more. According to the Institute of Cancer Research, the results highlight the potential of the pembrolizumab–guadecitabine approach for when immune inhibitors on their own may have failed.

“Guadecitabine in combination with pembrolizumab is tolerable with biological and anticancer activity. Reversal of previous resistance to immune checkpoint inhibitors is demonstrated,” researchers concluded.

Results from the study suggest that the combination treatment “might help those with non-small cell lung cancer … who have few treatment options if chemotherapy and immunotherapy stop working for them,” Minchom said, reiterating, “This combination might be a way to target their cancer even after it has stopped responding to immunotherapy.”

Of the 12 patients with NSCLC recruited to the trial, 10 had previously received immune checkpoint inhibitor therapy, of whom three—or 30 percent of the 10 patients—had disease control of 24 weeks or more.

Overall, five patients—or 42 percent of the 12 NSCLC patients in the trial—had disease control of 24 weeks or more. This suggests that the immune system was effectively acting against the tumor.

The study authors said that this is one of the first known reports evaluating the guadecitabine–pembrolizumab combination treatment with immunological measurements.

Johann de Bono, the study’s chief investigator, said in a statement that researchers had “used multiple different methods to look for changes in the immune system, robustly showing that it was being influenced by the combination treatment.” He said this was “one of the most important things about this trial.”

He added, “In the long term we hope that if these effects are confirmed in other patient groups and future studies, guadecitabine and pembrolizumab could help to tackle some of the resistance to immunotherapy we see in too many types of cancer.”