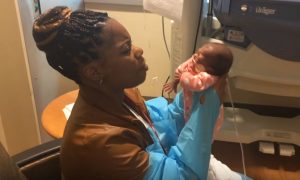 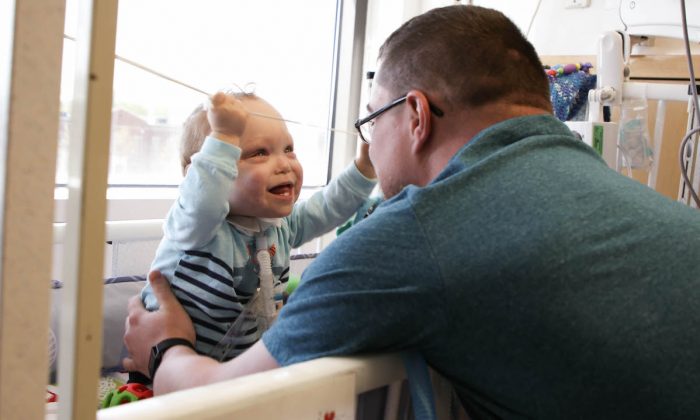 Joe Shields playing with his son Jack who was diagnosed with BPD after being born 14 weeks early. (Courtesy of Nationwide Children's Hospital)
Life & Tradition

A new treatment at Nationwide Children’s Hospital has increased the survival rate for babies facing a chronic lung disease from four in five to 99 in 100.

Babies who are born prematurely can experience an array of health problems, and one of the most common is bronchopulmonary dysplasia, also known by the acronym BPD.

In severe cases, BPD has a fatality rate of 20 percent. However, Nationwide Children’s Hospital (NCH) is using a new ventilator and neurodevelopment approach that is having transformative results.

Since these infants’ lungs aren’t developed fully enough, doctors are often forced to put them on ventilators. Sometimes, infants are sedated to keep them calm while on the ventilator and reduce their need for the ventilator to help them breathe. The ventilators can lead to long-term lung damage while the sedatives hurt their neurodevelopment.

It’s particularly tragic when a newborn succumbs to BPD because death usually occurs months after birth, and the family has had time to bond with the baby.

The course of the disease is also a difficult one for the infant, Dr. Edward Shepherd, section chief of Neonatology at  NCH, told The Epoch Times.

“It requires, in general, lots of treatments that are good in the short term, but bad in the long term,” he said.

Besides sedation and ventilators, infants with BPD are also treated with steroids. While steroids can effectively treat the lung inflammation associated with BPD, they interact with other cells in the newborn’s body and affect brain development and overall growth.

BPD is associated with neurological conditions such as cerebral palsy, blindness, and deafness.

The problems associated with these standard treatments gave the team at NCH a goal to minimize the use of sedatives and steroids for children suffering from BPD.

Doctors discovered that adjusting the ventilator, so the infant gets larger breaths at a slower rate, is less damaging to the lungs than the standard ventilation rate.

That, combined with an effort to minimize sedatives and steroids, lowers the side-effects of the standard treatment program.

And then the staff at Nationwide Children’s do everything they can to stimulate neurodevelopment. They do that in large part by keeping these struggling children happy by tending to their developmental and social needs.

This involves a long list of approaches, including massage therapy, music therapy, and physical therapy. It’s also critical to have the parents interact with the baby as much as possible. Doctors try to minimize upsetting experiences for the baby by checking blood pressure and taking blood less frequently.

“We’ve learned how to treat the lung disease in a way that also makes the brain better,” Shepherd explained.

Two newborns who have benefitted from this new treatment approach are twins Jack and Jonah Shields. The twins were born Dec. 8, 2017, and were born 14 weeks early. Both developed BPD.

The first time their father Joe Shields saw the twins was when the medical team was taking them on warmers to the incubators.

“It was pretty scary,” Shields said.

The Shields twins arrived at NCH in Columbus, Ohio, on April 11, 2018. The twins were put on ventilators, and underwent the new treatment approach.

Even though the twins may not be able to run marathons, they are expected to make a full recovery. Both twins just turned 21 months old.

“It is an absolute joy to watch them every day,” Shields said.