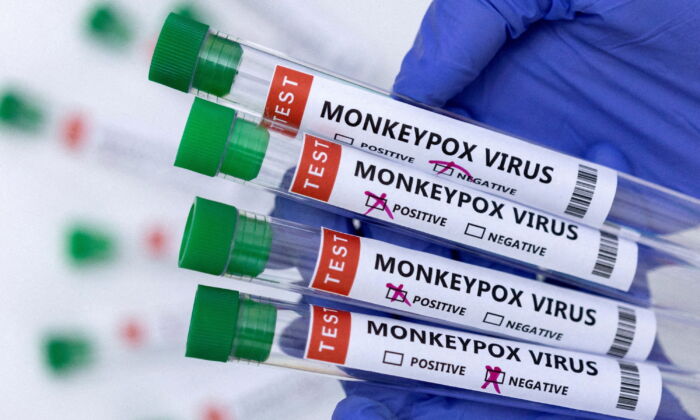 A new study into monkeypox holds a possible clue as to why the virus is spreading so quickly, with researchers saying they have discovered that the virus contains an unusually high number of mutations, which may represent “accelerated evolution.”

The new monkeypox strain was found to have an average of 50 mutations in samples examined by Portuguese researchers, while only around 10 would normally be expected, according to the new peer-reviewed study, published on June 24 in the medical journal Nature Medicine.

The unexpectedly high number of genetic variations in the currently spreading monkeypox variant suggests that the virus may be fast-adapting, with possible implications for transmission speed.

The researchers found 50 single nucleotide polymorphisms (SNP) in the new variant, noting that this is roughly 6–12 more than typical and that such divergence from the norm “might represent accelerated evolution.”

While the researchers said some of the proteins identified in the samples are known to interact with the human immune system, more study is needed to determine whether the high number of mutations is causing increased transmissibility between humans.

“We do not know that,” said João Paulo Gomes, co-author of the study and head of the Genomics & Bioinformatics Unit at the National Institute of Health in Portugal, in remarks to Newsweek.

“We just know that these additional 50 mutations were quite unexpected,” he added, noting that further specialized lab experiments would be carried out on the virus “in order to understand if this 2022 virus has increased its transmissibility.”

Monkeypox, a viral disease that causes fever, skin lesions, and can sometimes be fatal, is endemic in a number of countries but has recently spread more widely, affecting regions where the virus was not historically known to be present, fueling concern.

The current outbreak has seen a total of 2,103 lab-confirmed monkeypox cases, including one death, according to the World Health Organization (WHO).

“The outbreak of monkeypox continues to primarily affect men who have sex with men who have reported recent sex with new or multiple partners,” the WHO said.

Health authorities in the UK recently announced a vaccine rollout specifically for this group.

“By expanding the vaccine offer to those at higher risk, we hope to break chains of transmission and help contain the outbreak,” Dr. Mary Ramsay, head of Britain’s Health Security Agency, said in a June 21 statement.

“We are continuing to see a notable proportion of cases in gay, bisexual, and other men who have sex with men,” Ramsay said, noting that contact tracing efforts were helping to limit the spread of monkeypox more widely in Great Britain.

In the United States, health authorities said in a June 24 tally that they’ve identified 201 cases of monkeypox.

The Biden administration said on June 22 that it was expanding monkeypox testing capacity by shipping tests to five commercial laboratory companies.

“By dramatically expanding the number of testing locations throughout the country, we are making it possible for anyone who needs to be tested to do so,” said Xavier Becerra, Secretary of the Department of Health and Human Services (HHS).

“All Americans should be concerned about monkeypox cases,” he added.