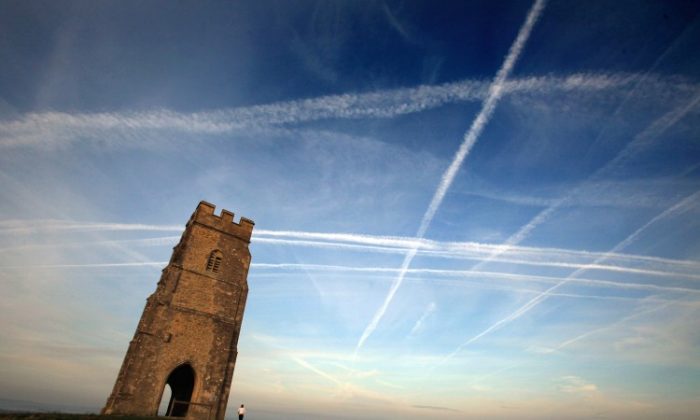 A woman looks up at the mass of contrails left by a jet aircraft crossing the sky above St. Michael's Tower near Glastonbury, England. (Matt Cardy/Getty Images)
Mind & Body

Nervous-System Damage From the Sky

The name chemtrails is a spin-off from contrails, which are condensation trails left behind flying aircraft. There is credible evidence that chemtrails are toxic to man, animals, and the soil.

There is current concern in the United States about the increasing number of neurodegenerative patients. Since 2000, the number of Alzheimer’s patients has increased from 4.5 million to 5.4 million in 2012, according to the Alzheimer’s Association. One in eight people 65 or older have Alzheimer’s. A yearly increase seems inevitable because of the aging population, but environmental factors also play a role.

The article, “Chemtrails, Nano-aluminum, and Neurodegenerative and Neurodevelopmental Effects” by Russell Blaylock, M.D., in the National Health Federation magazine “Health Freedom News” warns against one of these environmental hazards: chemtrails.

Blaylock, who has retired from neurosurgery to do research, write, and teach, began to notice chemtrails a few years ago and writes, “Of particular concern is that there are now so many—dozens every day are littering the skies.” Chemtrails are made from aerosols, usually spread by non-passenger jets. What at first looks like contrails turns into ribbons of clouds that spread out making the sky look over-cast. They contain various toxic, and biological substances. Blaylock concentrates on the effects of the nano-aluminum particles, as mentioned in Part 2 of Chemtrails Over Las Vegas in the August 26, 2005, Las Vegas Tribune.

Chemtrails are not admitted as a threat or as existing by governments, but their existence occasionally comes out in the media. TV station KNBC Los Angeles, Calif. hosted Toxic Sky with Paul Moyer, an account of sickness of children and record amounts of barium and aluminum in the water supply after chemtrails were seen over San Bernardino.

In Aug. 2005 the Las Vegas Tribune had a two-part article detailing the chemtrails over Las Vegas, the ensuing chemtrails sickness, and previous chemtrail history from other sources. In the Las Vegas Tribune report, the U.S. Air Force on their website called chemtrails a “chemtrail hoax,” but “scientists working at Wright Patterson Air Force Base confirmed to the Ohio newspaper, Columbus Alive, that they were involved in aerial spraying experiments. One involved aluminum oxide spraying related to global warming and the other involved barium stearate and had to do with high-tech military communications.”

Individuals who have noticed health problems, die-off of livestock or crops concurrently with the appearance of chemtrails have investigated on their own, having their blood, soil, water, and atmosphere tests made to compare with the norms. A compendium of these reports both documented and anecdotal is on Strange Days Strange Skies online.

The documentary film What in the World Are They Spraying? produced by G. Edward Griffin, Michael Murphy, and Paul Wittenberger shows the impact on the environment of chemtrails. For instance, the snow on Mount Shasta normally has 7 parts per billion (ppb) of aluminum, but over the last four or five years it has increased to 61,000 ppb.

Soil in northern California is turning alkaline, disrupting the root systems of trees. Farmers have noted that some plants will no longer grow in Hawaii. Fishermen see fewer bugs for the fish. These are a few examples from the above documentary.

True to his specialty, Blaylock chooses to write about the neurotoxin nano-aluminum, one of the main ingredients of today’s chemtrails. He states in his article that “studies have shown that these particles pass along the olfactory neural tracts, which connect directly to the area of the brain that is not only most affected by Alzheimer’s disease, but also the earliest affected in the course of the disease.”

Aluminum nanoparticles are also very easily absorbed from the GI tract, unlike ordinary aluminum that is usually not absorbed. Because of their small size, the nanoparticles can go through the brain-blood barrier, penetrate cell membranes, and disrupt mitochondria.

Nanoparticles can accumulate in the bone marrow, spleen, lymph nodes, and heart, as reported in “Manufactured Aluminum Oxide Nanoparticles Decrease Expression of Tight Junction Proteins in Brain Vasculature,” published in the Journal of Neuroimmune Pharmacology (December 2008). When inhaled, they inflame the lungs, bringing on asthma or other pulmonary ailments.

In his article, Blaylock predicts an “explosive increase in neurodegenerative diseases occurring in adults and the elderly in unprecedented rates as well as neurodevelopmental disorders in our children” if these cloud projects are not stopped.

The danger to children is the greatest since they are more likely to be outside. Also, they are smaller and not fully developed. Some of the advice from the Stop Spraying California website is to stay inside on chemtrail days, drink lots of water, and eat ice cream.

Chelating foods that flush toxic metals out of our systems such as chlorella and cilantro may help. And remember to keep the immune system in top shape