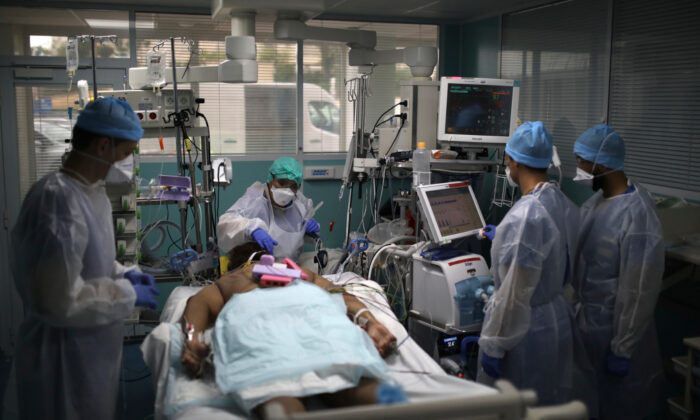 A medical crew works around a patient affected with COVID-19 in a Marseille hospital, France, on Sept.10, 2020. (Daniel Cole/AP)
PUBLIC HEALTH INFORMATION

Almost a third of people who have been hospitalized for the CCP virus have experienced an altered mental state, according to a new study.

Scientists found patients who suffered altered mental states, most of whom were older and male, were more likely to die than those who did not.

The study, published on Oct. 5 in the Annals of Clinical and Translational Neurology journal, analyzed the records of the first 509 patients who were hospitalized with the CCP (Chinese Communist Party) virus between March 5 and April 6.

The records were sourced from the Northwestern Medicine Healthcare system, which consists of one academic medical center and nine other hospitals in the Chicago area.

Out of 509 patients, 162 suffered from encephalopathy.

“Encephalopathy is a generic term meaning something’s wrong with the brain,” said Igor Koralnik, one of the authors of the study and the chief of neuro-infectious disease and global neurology at Northwestern Medicine.

Koralnik said that encephalopathy can encompass various conditions, such as attention issues and troubles concentrating, short-term memory loss, disorientation, being in a state of stupor, or unresponsiveness.

“Encephalopathy was associated with the worst clinical outcomes in terms of ability to take care of their own affairs after leaving the hospital, and we also see it’s associated with higher mortality, independent of severity of their respiratory disease,” Koralnik said.

However, there is no clear indication as to what causes encephalopathy, as there is a lack of testing amidst the pandemic. Scientists said it could be due to factors such as inflammation, systemic disease, the condition that limits the ability to coagulate blood, or a brain invasion from the virus.