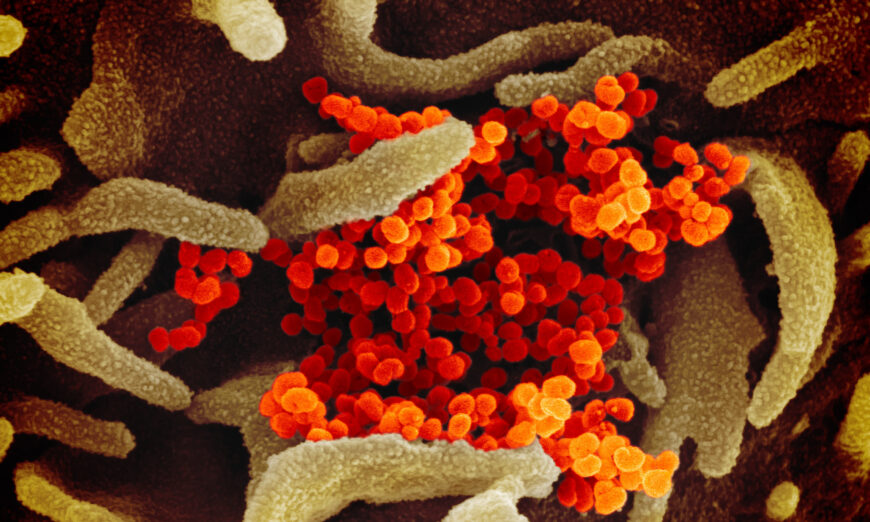 This scanning electron microscope image shows the CCP virus (orange), which causes COVID-19, isolated from a patient in the U.S., emerging from the surface of cells (green) cultured in the lab. Photo published on Feb. 13, 2020. (NIAID-RML)

People who have recovered from COVID-19 are at little risk of contracting the disease again, according to a study published last week.

Researchers in Qatar examined a cohort of over 353,000 people using national databases that contain information about patients with polymerase-chain-reaction-confirmed infections.

Reinfections were counted if a person tested positive at least 90 days after their first infection.

After excluding approximately 87,500 people with a vaccination record, researchers found that those with immunity due to having recovered from COVID-19 had little risk of reinfection or severe cases of the disease.

Just 1,304 reinfections were identified. That means 0.4 percent of people with natural immunity and without a vaccination record got COVID-19 a second time.

The odds of severe disease were 0.1 times that of primary infection, according to the study. Just four such cases were detected.

No cases of death were recorded among those who got infected a second time.

The study was published in the New England Journal of Medicine. It was funded by Weill Cornell Medicine–Qatar, Qatar’s Ministry of Public Health, the Hamad Medical Corp., and Sidra Medicine.

The researchers, Laith Abu-Raddad with Weill Cornell Medicine–Qatar and Dr. Robert Bertolini with Qatar’s Ministry of Public Health, had previously assessed the effectiveness of natural immunity against reinfection as being 85 percent or greater.

“It needs to be determined whether such protection against severe disease at reinfection lasts for a longer period, analogous to the immunity that develops against other seasonal ‘common-cold’ coronaviruses, which elicit short-term immunity against mild reinfection but longer-term immunity against more severe illness with reinfection. If this were the case with SARS-CoV-2, the virus (or at least the variants studied to date) could adopt a more benign pattern of infection when it becomes endemic.”

“Important study showing how rare reinfection and COVID severe disease is after recovered COVID,” Dr. Monica Gandhi, an infectious diseases doctor at the University of California–San Francisco, wrote on Twitter.

She said the study adds to the growing body of research that indicates that people who have recovered from COVID-19 enjoy high levels of immunity against reinfection, and even higher protection against severe disease and death.