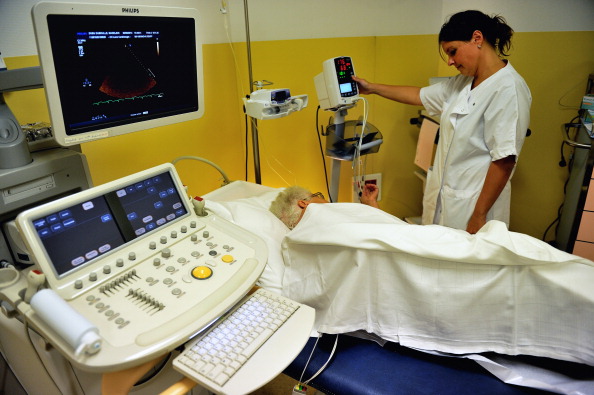 A nurse conducts a cardiological examination on a patient on Sept. 20, 2013. (Philippe Huguen/AFP/Getty Images)
Health News

Myth vs Fact: Comparing US and Canadian Healthcare Systems

What Americans know has come mainly from the negative talking points of politicians and others who have argued for years against national health insurance. Two decades ago, The New York Times reported that Canadian women had to wait for Pap smears, a point vigorously refuted by the Canadian ambassador who shot back in a letter to the Times editor: “You, and Americans generally, are free to decide whatever healthcare system to choose, avoid or adapt, but the choice is not assisted by opinions unrelated to fact.”

Yes, there are waiting lists for some services—but, no, Canadians are not coming across the border in droves to get American care.

There’s misinformation among Canadians, too. Wherever I went in Canada, Canadians told me they thought, mostly based on what they said they heard on CNN and Fox, that Obamacare meant America was getting universal health coverage like their country has.

When I explained the law was simply another patch on a patchwork quilt of coverage, and the Congressional Budget Office had estimated last year there would still be some 30 million people without insurance, the reaction was “the news media didn’t tell us that.” A former deputy health minister in New Brunswick said to me, “After all that, you will still have 30 million people without coverage!”

Separating fact from opinion as the Canadian ambassador long ago urged was something I tried to do as I made my way across Canada while visiting there recently. In some ways, the Canadian system is very different from U.S. healthcare. In other ways, it’s very much the same and faces similar challenges in the years ahead.

Although the Affordable Care Act in the U.S. calls for more people to have health insurance by offering subsidies and mandating all Americans have it or face penalties, the concept of universality is still a far distant goal.

The Canada Health Act, on the other hand, calls for universality—all residents must be covered by the public insurance plan run by their province on uniform terms and conditions. They have coverage wherever they are treated in their home province, and there’s none of this stuff about limiting the doctors and hospitals that patients can use as a condition of getting full benefits. In Canada, there are no financial barriers to care at the point of service as there are and will continue to be in the U.S.

Canadians don’t pay coinsurance of 30 percent or 50 percent if they have an outpatient procedure or go to an urgent care clinic, charges that are becoming increasingly common in the U.S. They don’t worry about paying a gigantic bill if they happen to use an out-of-network doctor or hospital.

The publicly-funded system north of the border bases patients’ access to medical services on need, not on the ability to pay. To use the word “ration,” Canadians ration by need; Americans ration by price and will continue to do so as the ACA is implemented.

Because it’s publicly funded, Canadian healthcare is more equitable. There’s no such thing as buying a platinum plan and getting first-rate coverage or a cheapo bronze policy and paying 60 percent of the bill yourself.

The tiered policies available in the state exchanges further bake inequality into the U.S. system. People have wildly varying benefits depending on where they live, how old they are, where they work, and how much they can afford to spend on health insurance.

That’s not the case in Canada, except when it comes to prescription drug coverage. Drug benefits are quite unequal in Canada, and the lack of them is a pretty big hole for about 10 percent of the population.

There is no universal drug benefit, although two provinces have mandatory drug insurance—you can get it from an employer or buy it from a public plan. About 40 percent of the population gets coverage from their employers. If you can’t afford the premium, there are subsidies. In that sense, Canadian drug coverage in those provinces resembles Obamacare.

Still, having drug benefits does not necessarily mean adequate coverage, says Globe and Mail health columnist, André Picard: “The big difference from the rest of Canada’s system is there is very little first-dollar coverage of prescription drugs.”

On a recent trip to Canada I heard much more about the social determinants of health than I hear in the U.S. Almost everyone I interviewed mentioned the dismal health stats for aboriginal populations and the need to improve access and quality of care. I tried to remember the last time I heard anyone discuss the medical problems of Native Americans or quality of care provided by the Indian Health Service.

I asked Michael Decter, a health policy expert and a former deputy health minister in Ontario, what his wish list for Canadian healthcare was. Topping his list was not more money for the health system; it was more for education aimed at improving the lives of aboriginal peoples. Better education correlates with better health. The second was drug coverage. Canada’s infamous waiting times were not high on his list of priorities. In fact, he didn’t even mention them as a problem.

Trudy Lieberman, a former president of AHCJ, is a contributing editor to the Columbia Journalism Review. She is a fellow at the Center for Advancing Health where she blogs about paying for healthcare.

This article comes from TroyMedia.com