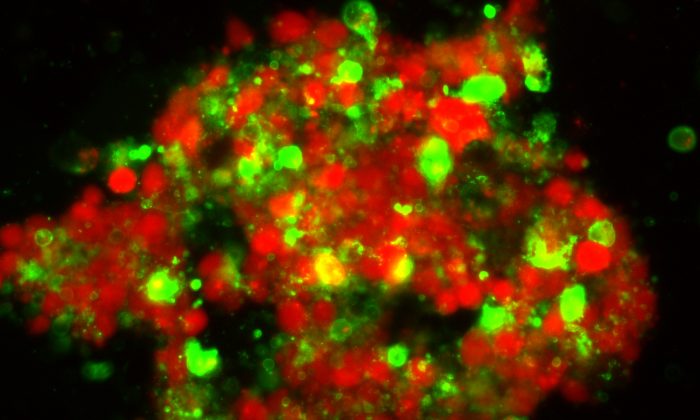 Above, the colon cancer cells in red are unharmed. The ones in green are undergoing a highly orchestrated form of cellular death called “apoptosis.” (Credit: Virginia del Solar)
Science

The role of organic compounds called “sphingolipids” in cancer remains a mystery—in particular, the way in which cancer cells die.

A new study sheds light on this topic, tracing how levels of various sphingolipids spike inside cancer cells when the cells are undergoing a highly organized form of cellular death called apoptosis.

In normal cells, apoptosis—akin to cellular suicide—happens when a cell is damaged. The self-destruction is healthy: It’s thought to help the body rid itself of dysfunctional cells.

Cancer cells are adept at evading apoptosis, which is one reason they multiply out of control. But in the new study, the scientists forced the cells to commit suicide, then carefully tracked what happened inside the cells as they self-destructed.

“A better understanding of the machinery of apoptosis, at the fundamental level, can perhaps help us find new therapeutics for cancer,” says G. Ekin Atilla-Gokcumen, the study’s senior author and an assistant professor of chemistry at the University at Buffalo.

Previous studies have established that sphingolipid levels rise during apoptosis in cancer cells, but the new research—which appears in the journal Chemistry & Biology—makes two important contributions.

First, the scientists found that the sphingolipid spikes may be unique to cancer. The team observed the phenomenon in three types of cancer cells (colon, ovarian, and breast) during apoptosis, but not in two types of noncancerous cells (colon fibroblast cells and retinal epithelial cells) undergoing the same process, Atilla-Gokcumen says.

Second, the scientists were able to create a detailed portrait of how the levels of many different sphingolipid compounds changed over time as death unfolded.

“We show that dying cancer cells appear to carefully tune the levels of individual sphingolipids as apoptosis progresses,” Atilla-Gokcumen says. “Different compounds accumulate at different rates. Our results build on evidence that numerous sphingolipids are involved in managing this process of cellular death.”

The study used a powerful technique called untargeted lipodomics to analyze the entire lipodome—the collection of all lipids within cells. Lipids, which include compounds like fats and waxes, are one of the major classes of molecules found in the body, and there are thousands of them.

Despite this huge diversity, the study found that sphingolipids accounted for nearly 90 percent of lipids that accumulated in colon cancer cells during apoptosis.

The findings emphasize what previous studies have found: that sphingolipids, which have been linked to some of the body’s most mysterious processes, such as cell proliferation and differentiation, appear to be highly active during cellular suicide.