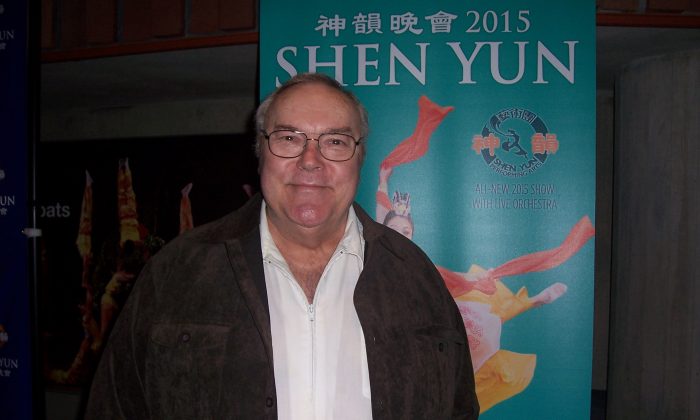 BERKELEY, Calif.—A musician and folk dancer from Latvia was astonished by Shen Yun’s theatrical innovation. “I thought that was one of the greatest ideas, gorgeous,” said Uldis Zebergs at Berkeley Zellerbach Hall on Jan. 7.

“I love the way people came on and off the stage. When it first started it was just one of the things that took your breath away.” He was speaking of Shen Yun’s animated projected digital backdrop, which dancers appear to enter and emerge from.

The lady was phenomenal.
— Uldis Zebergs
Mr. Zebergs plays and has taught string instruments, including the violin and guitar. A Shen Yun musician performs an erhu solo, “All for Today.” He was astonished. “The lady was phenomenal.” Although an erhu only has two strings, she could perform anything on it “that a violin and even perhaps a cello could do. The artistry is incredible.”

The Shen Yun artists’ mission is to revive authentic Chinese culture, according to the program. Mr. Zebergs admired them and their heritage. He said, “Personally, I think the Chinese people are  incredible, admirable people.

He found the total experience almost too much to absorb. It ” was just a grand, incredible, beautiful experience. The dance routines—the compatibility of all the movements, there’s too much to take in with your eyes.” On an emotional level, “it was just so fulfilling,” said Mr. Zebergs.