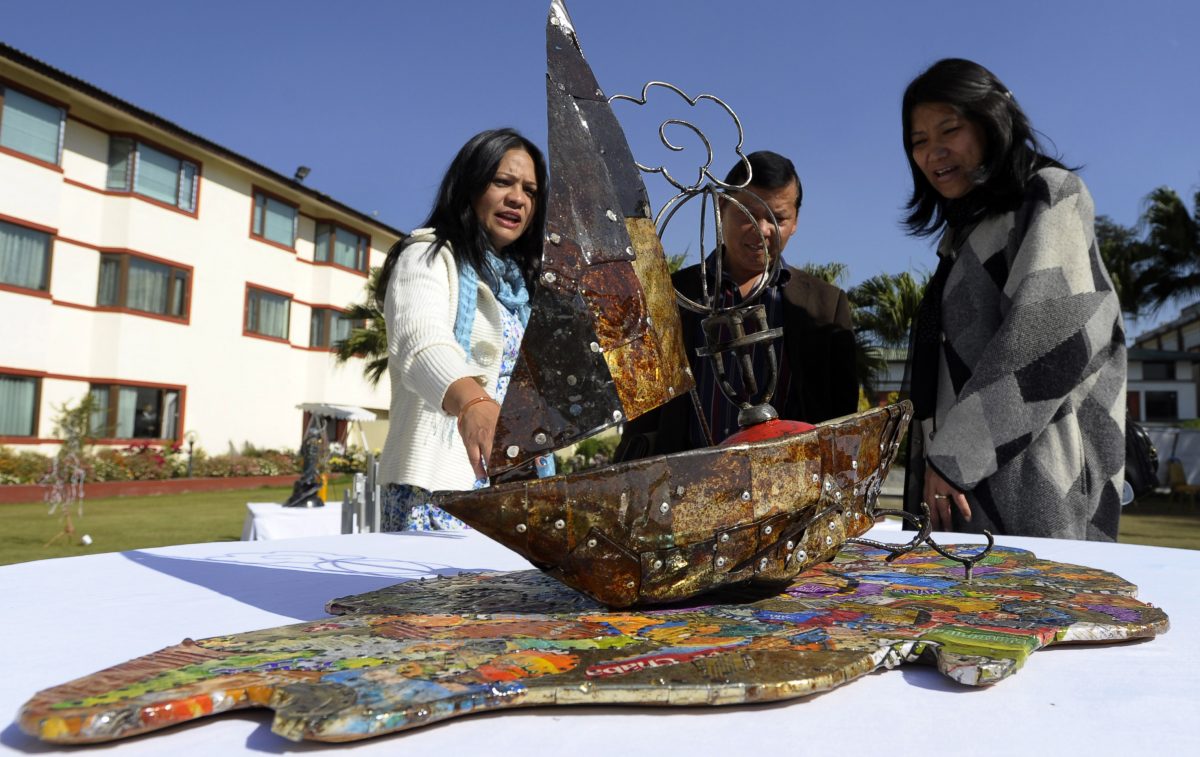 Visitors look at art made from trash collected on Mount Everest, in Kathmandu. Discarded oxygen and cooking gas cylinders, ropes, tents, glasses, beer cans, plastic and even the remains of a helicopter make up 75 artworks commissioned for the 'Everest 8848 Art Project' on display in Kathmandu. (PRAKASH MATHEMA/AFP/Getty Images)
Arts & Culture

In the 60 years since the first successful climb atop Mount Everest, an unwanted legacy of piles of trash have been left behind by those who followed. A group of Nepali artists have been working to bring new life to the waste left behind by climbers and transform them into works of art.

Since the historic climb in 1953 by Sir Edmund Hillary and Tenzing Norgay atop Everest, more than 3,500 people have followed suit. After all these years however, there has been no lack of climbing equipment, tin, paper, tents, human excrement, oxygen tanks, glass, etc, abandoned on Everest.

A group of Artists, part of an organization called Da Mind Tree began the Mount Everest 8848 Art Project last year to help recycle the trash and at the same time promote their works. They have collected from climbers 1.5 tons of garbage including the remains of a downed helicopter in the 1970s to create 74 pieces of art.

By selling the art works, the group donates some of the revenue to the Everest Summiteers Association, which also collaborated on the project.

Prajwal Shahi is one of the 15 local artists working towards recycling the waste.

“There are no metal recycling plants here, so we helped fill a gap. If no one cleaned up the mountain, trash may build up to form a mountain itself,” Shahi said in an article published by ECS Nepal last January.

All this garbage is the consequence of the commercialization of the mountain. But, at the same time, Mount Everest generates a great amount of cash flow for Nepal’s tourism industry.

This has caused the beauty of the Everest to decline and has many people, including Hillary, criticizing the practice of tourism on the Everest.

“I can remember when I first went into the Himalayan area way back in 1951 money for instance was not important at all to the local people,” said Hillary in an interview in 1996 with mountainzone.com.

“I think the Nepalese government has to be a bit more restrictive about permission for groups,” Hillary also said.