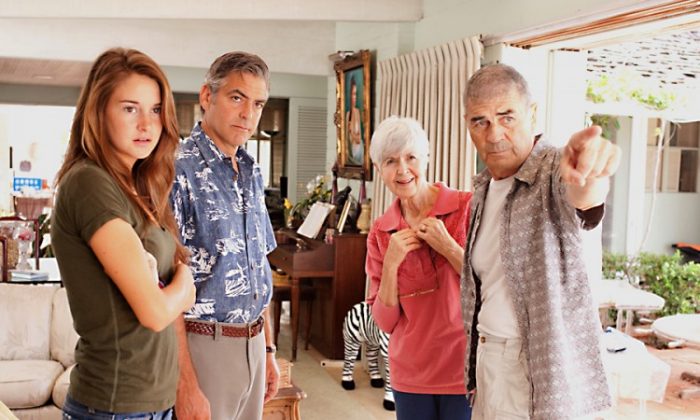 George Clooney is a man who excels at just about everything. How did that much good stuff all come down on one man’s plate? He appears, almost unfairly, to have it all—looks, humor, style, talent, wealth, fame, power, influence, and generosity.

In his high-quality new film “The Descendants,” Clooney demonstrates, this time around, that he can also do it all—acting-wise.

Clooney’s character, Matt King, is a lawyer living in Hawaii. A descendant (hence the title) of Hawaiian royalty, Matt owns a vast amount of pristine beachfront property. His numerous cousins pressure him with the moral dilemma, throughout the movie, of whether to sign it all away for development.

When his free-spirited wife, Elizabeth (Patricia Hastie), is put into a coma due to a boating accident off Waikiki, Matt is forced to reassess his life. His grade-school and high-school-age daughters, both acting out due to the combination of their mother’s condition and their father’s heretofore lack of involvement in their lives, begin to turn up the volume to get his attention.

Elder daughter Alexandra (a star-making, Oscar-buzzing turn from newcomer Shailene Woodley) finally drops a bomb on poor dad, revealing that prior to her accident, her mom was cheating on him.

They team up to track down the adulterer and then fly to the island he’s vacationing on, to confront him.

Director Alexander Payne is masterful at telling the story of the huge life transition. The film “Sideways” is one stellar example of this skill. “About Schmidt” is another. His latest, “The Descendants,” is easily on the level of “Sideways,” with Clooney’s performance rivaling that of Paul Giamatti.

While the best dramas are offset with moments of comic relief, director Payne achieves a curious effect. The comedy in “The Descendants” is very stealthy. Right in the middle of a heart-wrenching dramatic scene, a comedic line gets laughs because of the sheer gall of that particular line existing in that particular place.

The only part that’s slightly not believable (albeit hilarious) is the role of “Sid,” the boyfriend of Alexandra, played by Nick Krause. It’s hard to believe that Matt’s beautiful, whip-smart daughter would go for such an over-the-top level of cluelessness in a boyfriend. However, as the film proceeds, Sid’s character arc is touching and ends up very much belonging.

The revelation here is that while we expect top-notch dramatic acting from a character actor such as Giamatti, Clooney, with his leading-man looks, serves notice to those who doubted that he can do comedy, drama, action, voice-over, and just about everything else, equally well. And let’s not forget he blew the doors off TV in the hospital drama “ER.”

He reveals a depth of dramatic vulnerability here that takes real courage to access. It’s almost not fair, all this good stuff on one man’s plate, but credit will be given where credit is due.